(Video) Hacksaw Ridge Movie Trailer: WWII American Army Medic Desmond T. Doss, who served during the Battle of Okinawa, refuses to kill people and becomes the first conscientious objector in American history to be awarded the Medal of Honor.

Do you remember the World War II movies we watched as kids? In them a soldier getting shot resembled the gestures we acted out in our backyard battles: a grimace, a hand clutched to the wound, a gentle slump to the ground.

Just as Steven Spielberg did in Saving Private Ryan, director Mel Gibson disabuses us of those sanitized notions in Hacksaw Ridge, a blood-and-guts (in the most extreme sense) account of an inspiring war story: that of Army medic Desmond T. Doss, a conscientious objector who saved 75 fellow soldiers as enemy fire rained down on him during the Battle of Okinawa.

An artfully efficient storyteller — a trait he shares with Clint Eastwood — Gibson creates a narrative so compelling we cannot look away, even when the grisly action on-screen tempts us to do so.

Andrew Garfield — a two-time big-screen Spider-Man — stars as Doss, a mild-mannered youth who enlists in the Army despite his pacifist beliefs (he's Seventh-day Adventist) and the tearful objections of his father (Hugo Weaving), an emotionally damaged World War I veteran.

Also begging Doss to stay home is his new fiancée (Teresa Palmer), who sees his conscientious objector status as a solid reason not to march off to war with the other young men of Lynchburg, Va.

Likewise, when Doss shows up at boot camp, his fellow GIs and his commanding officer seem determined to make this odd recruit — who refuses to touch a rifle — go home. Yet their brutal resistance gradually thaws to grudging respect, even from a hard-core drill sergeant (a pleasingly gruff Vince Vaughn).

The movie's second half details the actual battle. From the relative safety of an Army encampment on the Japanese-held island of Okinawa, the GIs must climb a 400-foot rope ladder to an enemy-occupied plateau. There Gibson opens the door to a Grand Guignol nightmare of bodies vivisected and virtually obliterated by machine-gun bullets and mortar shells. In his worldwide phenomenon The Passion of the Christ, Gibson depicted graphic violence in service of a story of redemption. In a sense, he's doing the same thing here. Long after his surviving comrades have scrambled out of harm's way, Doss stays put, proving his mettle and merit as a soldier. He crawls, lurches and snakes his way from one wounded man to another, dragging each one back to the ledge and lowering him by rope, feverishly repeating his prayer: "Lord, help me get one more … just one more." 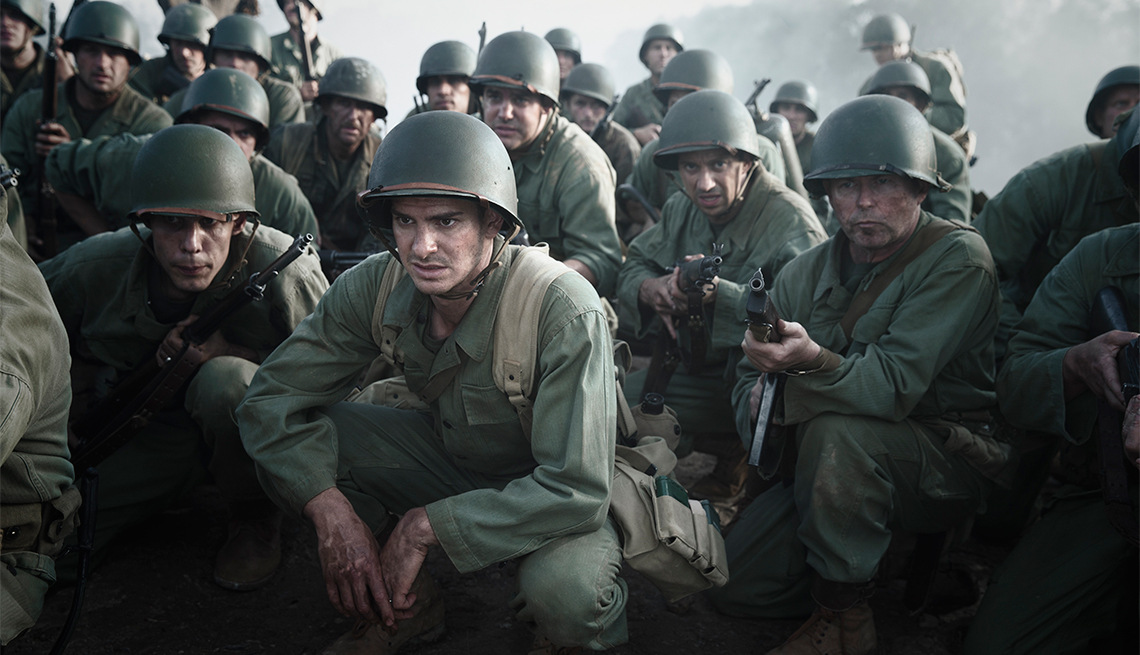 As Doss, Garfield not only matures in the course of the story; he appears to grow physically, as well. Terror and determination mix with the sweat and blood covering his body as Doss makes one split-second decision after another. All the while, miraculously, he preserves his core principles: refraining from violence and serving humanity.

Another acting surprise here is Weaving as Doss Senior. Best known as the poker-faced, sunglass-wearing Agent Smith in the Matrix films, Weaving is devastating as the PTSD-afflicted war vet, his eyes still haunted by the sight of his boyhood friends dying horribly on the killing fields of Europe. When he overcomes his trauma long enough to don his old Army uniform and come to his son's defense in a trumped-up court-martial, it represents a victory equal to any battlefield exploit. Clearly, heroism runs in the family.

No doubt Gibson will encounter a firestorm of criticism for the bloody savagery so graphically depicted in Hacksaw Ridge. But just as Gibson's earlier movie rejected the bowdlerized versions of the passion that have dominated art and drama for hundreds of years, here he visually makes his case that the best humanity can offer often arises amid the worst that humanity can inflict. There's no twisted pleasure in the making (or viewing) of this violence, only a solemn acknowledgment of the awful truth about war and bravery.

In an age when the term "hero" gets pinned on people like dime-store ribbons, that lesson is well worth relearning.