En español | For years, bookshelves have been noticeably devoid of young adult (YA) literature featuring Latino characters. But as Hispanics become an ever-increasing share of the school-age population in the United States, publishers and authors are stepping up.

"The need for Latino literature — for Latinos and non-Latinos alike — has always been there," says Marina Tristán, assistant director of the University of Houston–based Arte Público Press. "And certainly, as the Latino population grows and improves its educational status, there are more and more Latino writers looking for homes for their work." 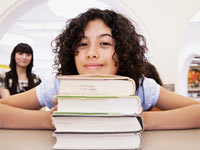 A nonprofit founded in 1979, Arte Público is one of the few publishers with a tradition of providing literature that reflects Latino lives. In 1994 the press created Piñata Books, an imprint that focuses on books for young readers.

Each year it puts out six bilingual picture books, one or two bilingual flip books for intermediate readers and four YA titles. Last spring's list included You Don't Have a Clue, edited by Sarah Cortez, a short story collection of whodunits, mysteries and thrillers by Latino authors.

For small publishers like Cinco Puntos Press, in El Paso, Texas, the YA and children's market has proved to be a lifeline to its own bottom line. Established in 1985 by husband-and-wife team Bobby and Lee Byrd, the press began with three titles that included one children's book La Llorona/The Weeping Woman. In September, Cinco Puntos will release its 10th YA title, Maximilian & the Mystery of the Guardian Angel: A Bilingual Lucha Libre Thriller, by Xavier Garza.

"Teachers and librarians were always asking for books that reflected Hispanic culture," says Lee Byrd. "We quickly understood that publishing books for children and young adults would be one of the important ways in which we sustained our work."

Next: Slang and rap make for a powerful literary mix. >>

The literature may also provide a way for young readers to sustain a sense of their own identity, self-worth and sense of community.

In Secret Saturdays, by Torrey Maldonado, the hard, gritty world of housing projects is drawn with a tight focus. Told in youth slang and rap-poetics, the novel describes how 12-year-old Justin and his friends struggle with the need to "front" and face the challenges of school bullying and absent fathers.

"You gotta be tough 24/7," Maldonado says about the Red Hook neighborhood in Brooklyn, where the book is set.

The American Library Association listed Secret Saturdays among 87 titles on its 2011 Quick Picks for Reluctant Young Adult Readers — 12- to 18-year-olds who don't like to read. Still, as contemporary as the story may seem, the coming-of-age theme transcends the generations.

Take last summer, when Maldonado displayed his novel at the Red Hook Old-Timers Day, an annual gathering where current and former residents pack into the local park. One man, whom Maldonado estimated to be in his 60s, glanced at the abandoned factory depicted on the book cover and asked, "What do you know about the Grey House?"

Maldonado opened to a page about it and let him sneak a peek. "This elder," Maldonado recalls, "reads the scene, closes the book, looks at me and says, 'This book was written in 2010, but this describes what happened to me.'"

Danette Vigilante and her debut novel, The Trouble With Half a Moon, have a lot in common with Maldonado and Secret Saturdays. Both authors grew up in Red Hook. Both books are set in housing projects, and both were acquired by Stacey Barney at G.P. Putnam's Sons.

"It's my personal mission to get more authors of color published," says Barney, who belongs to Diversity in Books, an association of editors who represent five big New York publishing houses. "We need more of these voices and perspectives we don't hear from nearly enough."

In The Trouble With Half a Moon, 13-year-old Dellie grieves the death of her kid brother and deals with the domestic crisis of another young boy in the housing projects where they live. More than a myopic take on a tween's rough life, The Trouble With Half a Moon has a large cast of senior citizens. Drawn with touching realism, these seniors, who may have trouble getting their groceries, have been "around the block" enough years to show Dellie how to heal and help others.

When the mystical Miss Shirley traces the seemingly "missing" half of the moon painted on her kitchen wall, she tells Dellie, "'You have to believe it's there. Faith, young one,' she says, balling up her fist, 'is powerful.'"

Vigilante made the conscious decision to include older characters in her book. "They were a part of my life," she says. "I think it's important for kids to pay attention to who's around them."

About the reading she did as a child, Vigilante recalls, "As a Puerto Rican kid, it would've been nice to see Hispanic characters."

She didn't, but that didn't stop her from returning to the public library for another armload of books. And it only affirmed her mission as an author.

"I want people to see themselves," she says.

You may also like: Carlos Fuentes, a master mind.