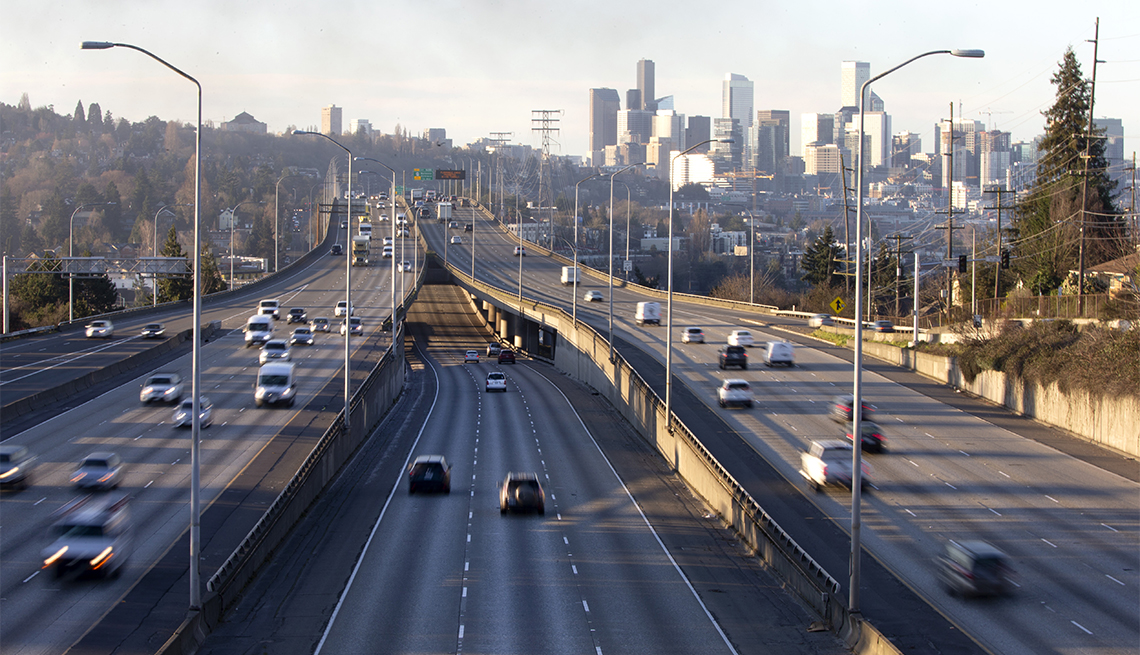 An aerial view of light traffic on Interstate 5 in Seattle.

En español | Consumer advocates are calling on insurance companies to continue partial auto-policy premium refunds that were widely instituted in the spring as the coronavirus pandemic sharply curtailed driving.

As business shutdowns, school closures and stay-at-home orders caused by the coronavirus outbreak cleared traffic from roads across the country, many of the largest U.S. auto insurers took the unusual step of returning a portion of premiums to policyholders because the companies had fewer accidents to cover.

Those relief measures generally shaved 15 to 25 percent off customers’ premium payments for one or more months during the spring and returned $14 billion to policyholders, according to the Insurance Information Institute. Several companies that initially announced the givebacks for April and May extended them to June, but now all but a handful have ended the refunds.

Here’s what some of the biggest auto insurers did.

• Allstate, the nation’s fourth largest auto insurer, refunded 15 percent of customers’ monthly premiums in April, May and June. The Northbrook, Illinois–based company said the paybacks amounted to more than $1 billion.

• American Family Insurance of Madison, Wisconsin, the ninth-largest firm, issued a onetime repayment in April of $50 for each vehicle on its automotive policies. The company has since introduced a new program, offering a 10 percent monthly credit on auto-policy payments through the end of the year.

• Farmers Insurance of Woodland Hills, California, the seventh-largest firm, reduced premiums for Farmers and 21st Century auto-policy holders by 25 percent for April and by 15 percent for May. New York customers got a onetime 40 percent refund.

• Geico, whose headquarters are in Chevy Chase, Maryland, is giving a 15 percent credit on up to six months of premiums for customers who renew or buy motor vehicle policies between April 8 and Oct. 7. The refunds will total about $2.5 billion, according to Geico, a subsidiary of holding company Berkshire Hathaway, which is considered the second-largest U.S. auto insurer.

• The Hartford, whose policies include AARP-branded auto insurance, gave customers a 15 percent refund on their personal auto premiums for April, May and June.

• Liberty Mutual, the sixth-largest auto insurer, gave auto-policy holders a 15 percent refund on two months of their annual premium. That returned about $250 million to customers of Boston-based Liberty Mutual and Safeco, which it owns.

• Nationwide, the No. 8 auto insurance carrier, with headquarters in Columbus, Ohio, provided a onetime premium refund of $50 for each personal auto policy in effect March 31. The refund is the equivalent of 15 percent of an average bill for two months, the company said.

• Progressive Insurance, whose corporate headquarters are in the Cleveland suburb of Mayfield Village, Ohio, gave a 20 percent credit on April and May premiums to customers with personal auto insurance. In New York the credits were applied in May and June. The company estimated that the givebacks will be worth about $1 billion total.

• State Farm, the country’s largest auto insurer, based in Bloomington, Illinois, paid an average 25 percent credit on auto-policy holders’ premiums from March 20 to May 31. State Farm also cut auto rates by an average of 11 percent nationally because of changing driving behavior. The company said the two initiatives saved customers $4.2 billion.

• USAA, the San Antonio–based member-owned association that serves current and former military personnel, is returning $800 million to policyholders through a 20 percent credit on three months of premiums.

Because the vast majority of Americans were compelled to stay at home throughout the spring and many are still largely sheltering in place, car insurance companies have fewer claims to pay and thus can afford to offer refunds.

“We insure more cars than anyone, and we see from our claims activity people are driving less,” Michael L. Tipsord, State Farm’s chairman, president and CEO, said in an emailed statement. “This dividend is one of the ways we’re working to help our customers during this unprecedented situation.”

Miles driven weekly nationwide declined by more than 60 percent from January to April, according to tracking data from transportation research company StreetLight Data that the Consumer Federation of America and the Center for Economic Justice cited in a recent report on insurers’ relief programs.

In that May study, the nonprofit advocacy groups said refund payments should be at least 30 percent of premiums to reflect similar declines in driving and accidents, and they have urged state insurance regulators to press companies for further paybacks.

“While miles driven and auto crashes are slowly increasing from the nadir this spring, the pandemic’s impact on auto insurance risk exposure is far from over and will last for many months,” the organizations wrote in a June 25 letter to state insurance commissioners.

Auto insurers have put other measures in place to help customers who have lost their jobs or been furloughed and are in financial difficulties because of the pandemic. During the spring several put a temporary hold on canceling policies for nonpayment and waived fees for late payments.

As with the premium givebacks, those blanket billing-relief programs largely ended in May and June, but some companies are still offering help like flexible payment plans on a case-by-case basis at customers’ request.

In addition, several states and the District of Columbia have mandated continued leniency on policy cancellations for insurance customers. Contact your insurance provider or your state’s insurance department for information.

Editor's note: This story, originally published April 7, 2020, has been updated to reflect the end of most premium paybacks.