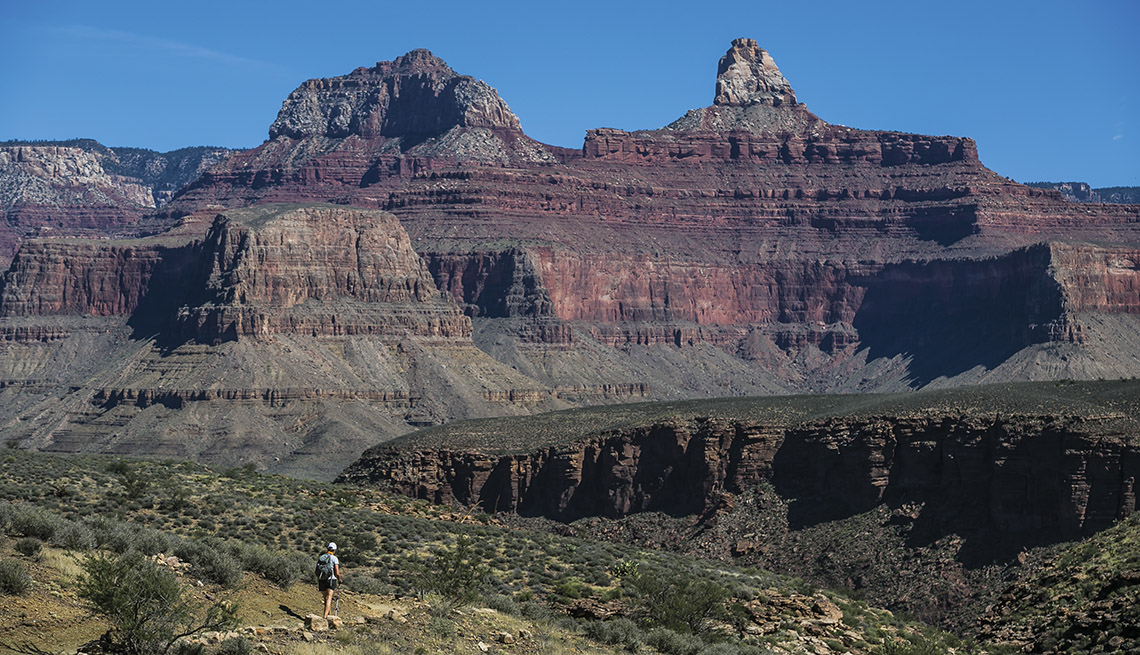 A hiker descends into the Grand Canyon.

En español | I wonder if any visitor is ever quite prepared to look over the rim of the Grand Canyon for the first time. In all my travels around the world, I haven’t seen another landmark that steals my breath so fully. If you widen your gaze to try to take it all in, the canyon seems to go on forever. Narrow your focus, though, and you’ll discover myriad fascinating details in every rock face.

Yet for all its visual glories from above, the real way to experience the Grand Canyon is to spend time inside it. Which is why I am here, signed up for a six-day tour to explore this extraordinary Arizona landmark.

The trip I’m on was put together by Austin Adventures, a Montana-based outfitter, and it's in autumn — so it's less crowded than it is in summer and the weather is beautiful. Our adults-only tour is designed to be accessible to people of average fitness, making it ideal for multigenerational groups. And so joining me are two sets of parents and their young-adult children. As I’ll discover, paddling, pedaling and hiking with others immerses you deeper into both the environment and your relationships.

The sojourn starts one hour east of Phoenix, kayaking on the Salt River through Tonto National Forest, one of the most visited urban forests in the U.S. We casually paddle adjacent to the Pima Nation territory, and even though it is fall, the sun blazes away. Our party is thrilled to find a “jumping rock” from which we can plunge 10 feet into the cool river below. Close by, two harems of wild horses enter the river to drink and seek respite from the heat. After lunch, we travel by van to Prescott, 100 miles north of Phoenix, where we will spend the night.

It is not unusual for high-altitude Arizona cities like Prescott to record temperatures 30 degrees cooler than in the nearby valley where Phoenix bakes, so temps are pleasant the next morning during our 11-mile bike ride on the Peavine and Iron King trails. The dirt trail rises slightly as we slip through ancient granite dells that look like the towers kids create at the beach by dripping wet sand through cupped hands. Just beyond lies Watson Lake, its rich blue waters offset against the granite cliffs. 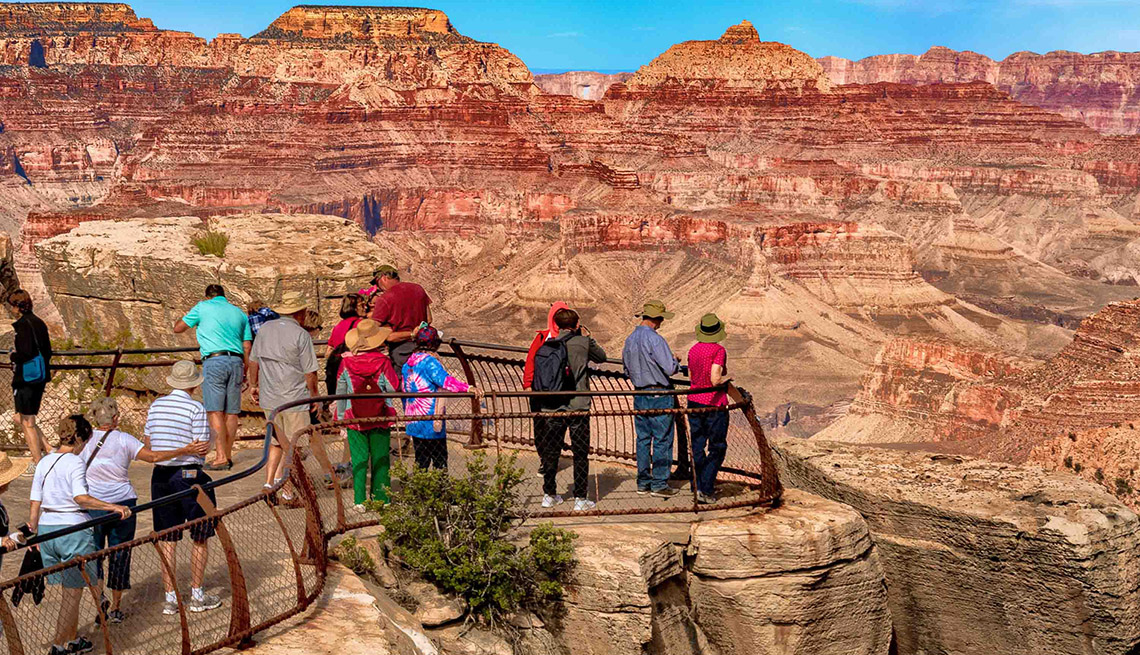 Tourists view the Grand Canyon from the South Rim.

Riding done, we secure our bikes on the roof of the van, then drive higher into Williams, the southern terminus of the historic Grand Canyon Railway, a popular 2.5-hour passage to the canyon’s South Rim. We board the train and are greeted at the rim by two Austin Adventures guides. After a picnic lunch overlooking the Abyss — a lookout point offering incredible views — we take a mellow two-hour walk along the Rim Trail as vertical clouds toss lightning and drape heavy sheets of rain in the distance.

After a good night’s sleep in Kachina Lodge, situated right on the rim, we descend into the canyon along the popular South Kaibab Trail for a four-hour hike to Cedar Ridge and back. Along the way, we see a sampling of the park’s vast biological diversity — not just hardy cottonwoods and willows, as one might expect, but also lacy maidenhair ferns and other delicate flora.

That evening, back at the lodge, the entire sky lights up, an electric circus piercing the atmosphere. And as we cycle out of the Grand Canyon the next morning for a 10-mile ride across prairies and through a ponderosa pine forest, the trees’ distinctive butterscotch scent pervades our path.

The last full active day includes Wupatki National Monument and Sunset Crater Volcano National Monument before we take a van to Sedona, known for its arts community and red-rock landscape. We have a convivial final dinner here. On the way back to Phoenix the next day, we stop at Montezuma Castle National Monument, the well-preserved Indian cliff dwellings at Camp Verde, Arizona. These lofty limestone structures, built before Columbus arrived on the continent, are a spectacular reminder of the land’s long history. It's the perfect place to end a grand trip.

Stepping onto a forest path outside of Lake Placid, New York, as the breeze stirs dried maple leaves into mini cyclones, I can’t imagine a more romantic setting. The Adirondack region fills with visitors in winter — and with visitors and pesky flies in summer. But fall here is as wide open as the hundreds of trails that traverse the region. On a crisp autumn afternoon, I step onto the 1.4-mile Old Orchard Loop, one of the Heaven Hills Trails that weaves through fields and woodland, with mountain views. The path reminds me of England’s Lakes District, where one can walk for hours through forest and farmers’ fields, up and over the crags. Autumn brings plenty to contemplate, from unpeeling yellow birch bark to knotty tree sculptures to vistas of the High Peaks. During the evenings, I like to slide into an Adirondack chair to watch a sunset cast a golden glow on the mountains.