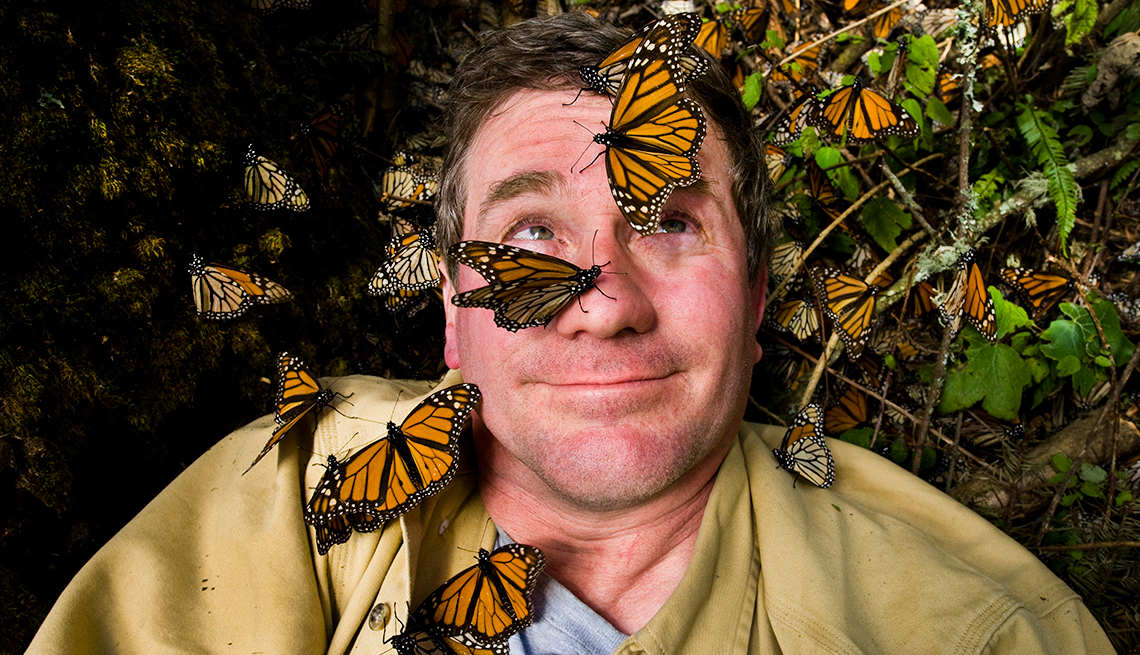 Photographer Joel Sartore is surrounded by butterflies in the Sierra Chincua monarch sanctuary. In honor of National Wildlife Day, Sept. 4, we’re sharing his photos to raise awareness about animals in danger of extinction.

World traveler and freelance photographer Joel Sartore, 55, needed an assignment that would allow him to stay close to home in order to care for his wife Kathy, who was battling breast cancer, and their three children. So he started photographing the animals at the nearby Lincoln (Neb.) Children’s Zoo.

Kathy has since recovered, and Sartore continues his personal mission to visually document every captive animal species on earth. From tiny insects to large carnivores, sea creatures to birds, and herbivores to carnivores, Sartore has traveled to 40 countries to construct the Photo Ark, an image archive of global biodiversity.

His goal is to raise awareness of threatened species and find solutions for wildlife and their dwindling habitats. “I was inspired to start photographing animals because so many truly had no voice of their own in terms of conservation, and that’s what continues to drive me on this project,” Sartore told AARP.

After 11 years, the Photo Ark contains more than 24,000 images representing 6,500 species of animals from the world’s zoos and wildlife sanctuaries. Some have become extinct since being photographed.

“I use studio lighting and black and white backgrounds to level the playing field for all species featured in the National Geographic Photo Ark — a mouse is every bit as large and important as an elephant,” he said.

Sartore believes to know the animals is to save them. “I hope this connection will inspire people to take action and protect these animals before it’s too late.”

Learn more about the Photo Ark at NatGeoPhotoArk.org.

Joel Sartore's book entitled, The Photo Ark: One Man's Quest to Document the World's Animals, was published in 2017 by National Geographic Books. Sartore, 55, is also a speaker, author, teacher and a 25-year contributor to National Geographic magazine and other publications.