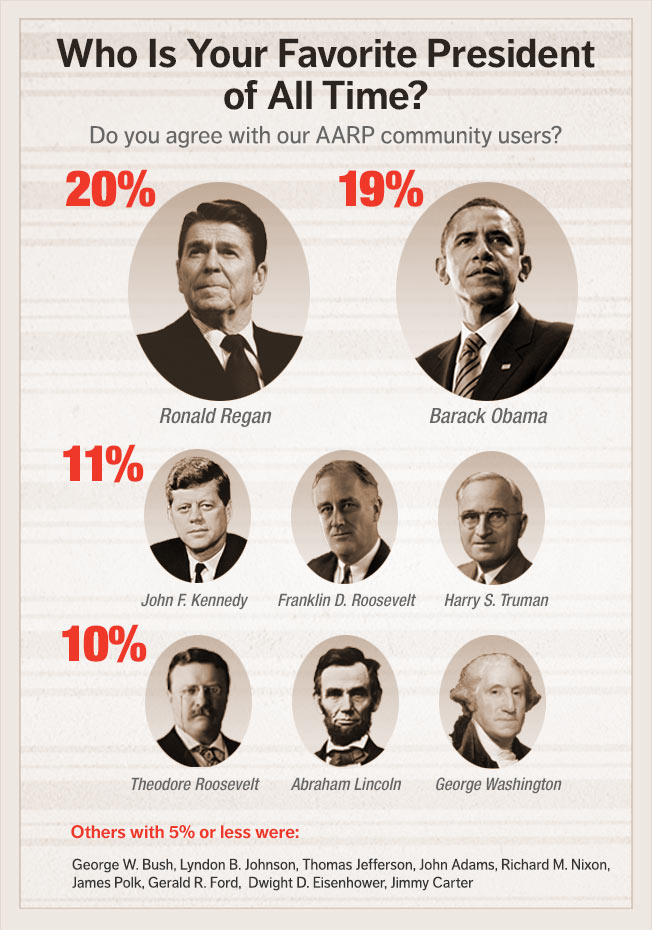 AARP asked its AARP Online Community users Who Was Your Favorite President of All Time and Why?

Of the 44 former and present Commander in Chiefs, more than seventy-five online community members users replied to the question, many expressing their choices with heartfelt appreciation. Here is sampling of a few posts:

"I will add Jimmy Carter.  While the Iran hostage crisis overwhelmed his presidency, his economics were excellent and since then, he has proven to be a mensch in every sense of the word"   and;

“John F Kennedy motivated an entire generation to public service, started the Peace Corp, challenged the US in math & science education, and set NASA on a course to not just land on the Moon, but also to create the technologies to get that done.  But my response is more personal.  As Congressman to the section of Boston where my Mom & Dad were raised and lived, my Mom appealed to his office to bring home my Dad from his service under Gen MacArthur during the post-War occupation of Japan - he did and I was born shortly after.  Later when her monther was dying, my Mom approach JFK again to bring home her baby brother from the Korean War so he could see their Mom one last time.  Kennedy was a US Senator by now and he got my Uncle a 2 week leave to come back to Boston in time for my Grandmother to see he baby son once last time.  How could I choose anyone else?”

Community: Tell us who is your favorite U.S. President of all time and why. Join the discussion