Ed Wentzlaff, a 24-year-old sailor from Minnesota, stood on the deck of the USS Arizona in Hawaii's Pearl Harbor, waiting for church services to begin. It was the morning of Dec. 7, 1941.

"This was a day of days. This day was like the Garden of Eden. It was beautiful, about 87 out, and water temperature about 80, and there wasn't a cloud in the sky," Wentzlaff, now 94, recalled in a telephone interview with the AARP Bulletin from his home in Milaca, Minn. "As I looked up in the forward part towards the naval hospital where the channel goes out to sea, this airplane made a big turn and it had a big red ball on the side. I didn't say anything at the time, I just looked and the next thing you know … the guy's machine gunning us." 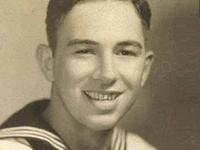 Ed Wentzlaff was aboard the USS Arizona on the Dec. 7, 1941, attack on Pearl Harbor.

Hundreds of Japanese planes howled out of the sky, so thick they blocked out the sun over Oahu. That day, 70 years ago, bombs and torpedoes rained down on Battleship Row and the nearby airfields. The Arizona, hit shortly after 8 a.m. by a 1,760-pound bomb, exploded, instantly killing 1,177 crewmen, including 25 sets of brothers. Debris and body parts fell from the sky.

Wentzlaff, one of just 335 aboard the ship to survive, was spared because he ran to his battle station instead of fleeing below. Aside from singed eyebrows and hair from the fires that raged on board, he wasn't injured.

Ordered to abandon ship, he was too terrified to jump overboard, where flames 3 feet high leapt on the surface of the water from fuel pouring out of the ship.

Instead, with another sailor, he ran down a gangway to an admiral's barge, which was tied up to the ship. As the Arizona rapidly sank — the ship went down in just nine minutes — it began to drag the barge down with it. Wentzlaff frantically cut it loose, while the other crew member started the engine. While waves of Japanese planes continued to strafe the harbor, the two rescued any survivors from the Arizona and plucked others from the burning waters. "Some of them were coming apart, they were that badly burned," he said.

When the attack ended two hours later, 2,403 Americans had died, more than half aboard the Arizona. The next day, President Franklin Roosevelt declared Dec. 7 "a date which will live in infamy" and called upon Congress to declare war on Japan. The Arizona's death toll is the greatest loss of life on any U.S. warship in American history.

Wentzlaff, one day away from the end of his enlistment period on the day of the attack, had plans to go into the resort business in Wisconsin with a Navy buddy, but he wasn't permitted to leave the Navy as World War II began. He served in a variety of roles throughout the war, and was on the USS Yorktown, which was sunk at the Battle of Midway.

Wentzlaff left the Navy in 1946 as a chief warrant officer and returned to his hometown of Nicollet, southwest of Minneapolis. Now, in retrospect, he realizes he was suffering from post-traumatic stress disorder, although he had no name for what he was feeling at that time. "I thought I could drink all the whiskey they made," he recalled. "I didn't do a thing for a year."

He wanted to be a lawyer, but large class sizes — boosted by returning vets on the GI Bill — at the University of Minnesota proved overwhelming. After leaving the university, he married and farmed corn and soybeans for 40 years. He was mayor of Butterfield, Minn., for four years, and served as a county commissioner and head of the local post of the Veterans of Foreign Wars. He and his wife divorced in the mid-1980s; she died this year. He has five children, seven grandchildren, 15 great-grandchildren and two great-great-grandchildren.

Next: 'I don't know whether there's any kind of a spirit down there or not, but I'll find out.' >>

Tomorrow at Pearl Harbor, when a moment of silence is observed at 7:55 a.m. to commemorate the start of the attack, Wentzlaff will be there. He will watch as a group of military jets flies above the Arizona Memorial in the traditional "missing man" formation to honor the dead. The Memorial, dedicated in 1962, sits atop the middle portion of the sunken battleship, which is the final resting place for most of the sailors killed in the attack. It will be his ninth trip to the site. He will be accompanied by family members, including his only grandson. 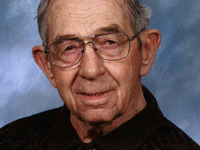 "In the chapel, they've got a big wall there with all the names of the ones that got killed. I look at that and, boy, it kind of shakes you up. Of course, I'm an old man and I don't have any emotion left," he said, his voice breaking for a moment.

The number of Pearl Harbor survivors is rapidly dwindling. Twenty years ago, there were more than 13,000 members of the Pearl Harbor Survivors Association, an organization of veterans who were at Pearl Harbor on the day of the attack. Today there are fewer than 3,000, said Mal Middlesworth, editor of the organization's newsletter, the "Pearl Harbor Gram." Middlesworth estimates that there are up to an additional 1,000 survivors who are not members. This year, the association announced it would shut down on Dec. 31, because of the advanced age and declining health of its members, as well as the difficulty in filling leadership roles.

At last year's commemoration, more than 100 veterans attended, many using walkers and wheelchairs to get around, Middlesworth said. Commemoration organizers expect about the same number this year, including seven survivors from the Arizona. The USS Arizona Reunion Association estimates that there are 18 survivors still living.

Wentzlaff, who is battling cancer, said this will be his last trip to the Arizona while he's still alive. "The tenth time I won't know it because I'm going to be buried down there," he said. He plans to have his ashes interred in a gun turret on the sunken ship. So far 33 Arizona crewmen have been buried there. The 34th will be interred there with full military honors tomorrow by National Park Service divers.

"I had great friendships over there with a lot of these guys and I kind of feel bad about the fact that I was with them in the last hour when they got killed, and just by pure luck I wasn't there with them," Wentzlaff said. "I'd rather be there than in some cemetery where you've got to go out and pick the dandelions and stuff off. I don't know whether there's any kind of a spirit down there or not, but I'll find out."

Despite his health setbacks, he still lives independently and enjoys playing the occasional game of poker at a local casino. He devours his newspaper, the Star Tribune of Minneapolis, every day, his daughter, Mary Flock, said. He also speaks to school and veterans groups about Pearl Harbor, although not as often as he used to.

"I kind of feel I'm obligated to go back over there. In a way I kind of feel guilty that I made it and they didn't make it," he said. "A lot of people said, 'Well, you're a big hero.' Well, you're not a hero. You're there, you have to do your job. And that's about what it amounted to."