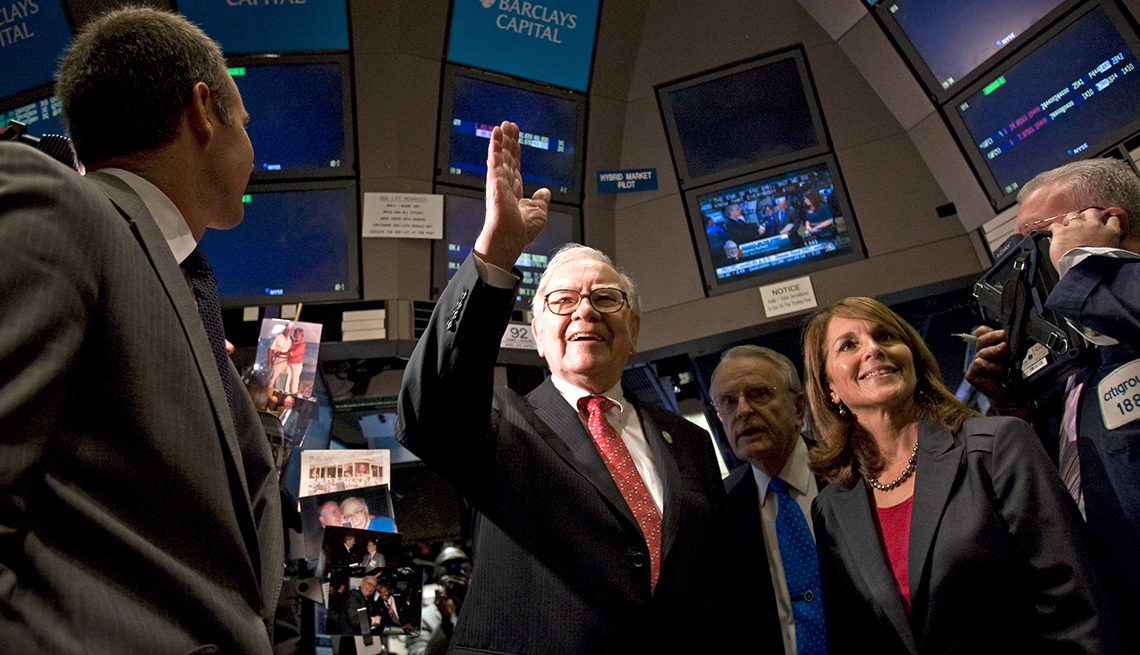 En español | Warren Buffett, already a famed investor and philanthropist and the sixth-richest person in the world, has something else to celebrate: turning 90. With an estimated $80.5 billion fortune, Buffett could hire 300 brass bands to march down the streets of his hometown of Omaha, Nebraska, to celebrate his birthday. That's unlikely. He still lives in the home he bought for $31,500 in 1958, eats at McDonald's every morning and, until this year, used a flip phone instead of a smartphone.

Buffett didn't get his fortune just by pinching pennies on living expenses, though he once drove a car with a license plate that said “THRIFTY.” He is CEO of Berkshire Hathaway and the world's preeminent value investor, meaning he invests in good businesses when they are down and rides them back to the top. Buffett isn't afraid to stick with a company for years, even decades, as long as it remains well run and profitable. 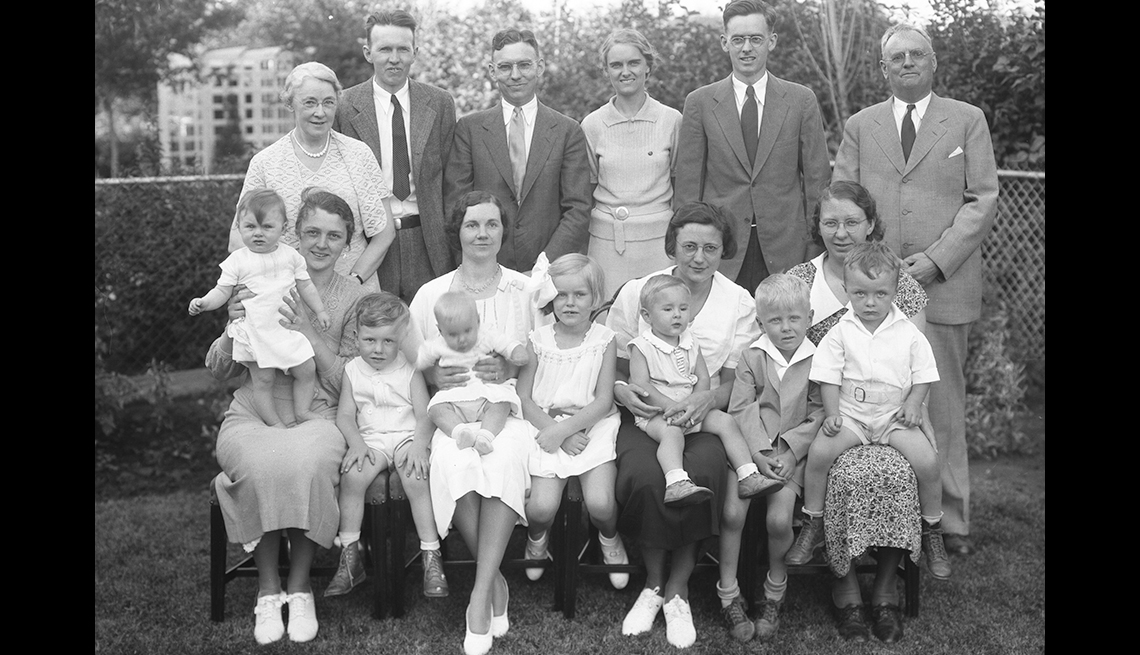 An interest in finance

Buffett was born in Omaha on Aug. 30, 1930, to Howard and Leila Stahl Buffett. “I like numbers, it started before I can remember,” Buffett once said. At 11, he bought his first stock: six shares of Cities Service Preferred.

His father, a congressman, brought the family to Washington, D.C., and Buffett earned cash delivering the Washington Post. At 14, he invested $1,200 of his savings into farmland. When he finished up at Woodrow Wilson High School, the caption on his yearbook picture read: “Likes math: a future stock broker."

After graduating from the University of Nebraska, Buffett was rejected by Harvard Business School and instead attended Columbia Business School, where he studied under Benjamin Graham, a renowned investor and economist.

In 1951, Buffett returned to Omaha, where he married Susan Thompson, his first wife, who died in 2004, and later bought his home. Buffett also formed several business partnerships and, in 1959, met Charlie Munger, now 96, who would become his right-hand man at a textile firm called Berkshire Hathaway. After taking control of the company in 1965, Buffett gradually abandoned the textile business and instead used Berkshire as a vehicle to invest in other companies. 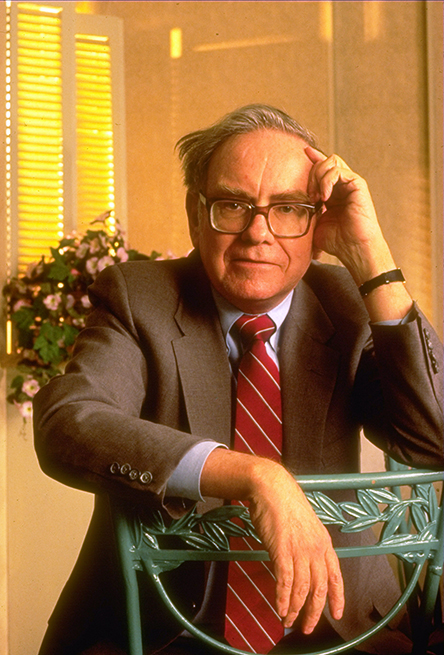 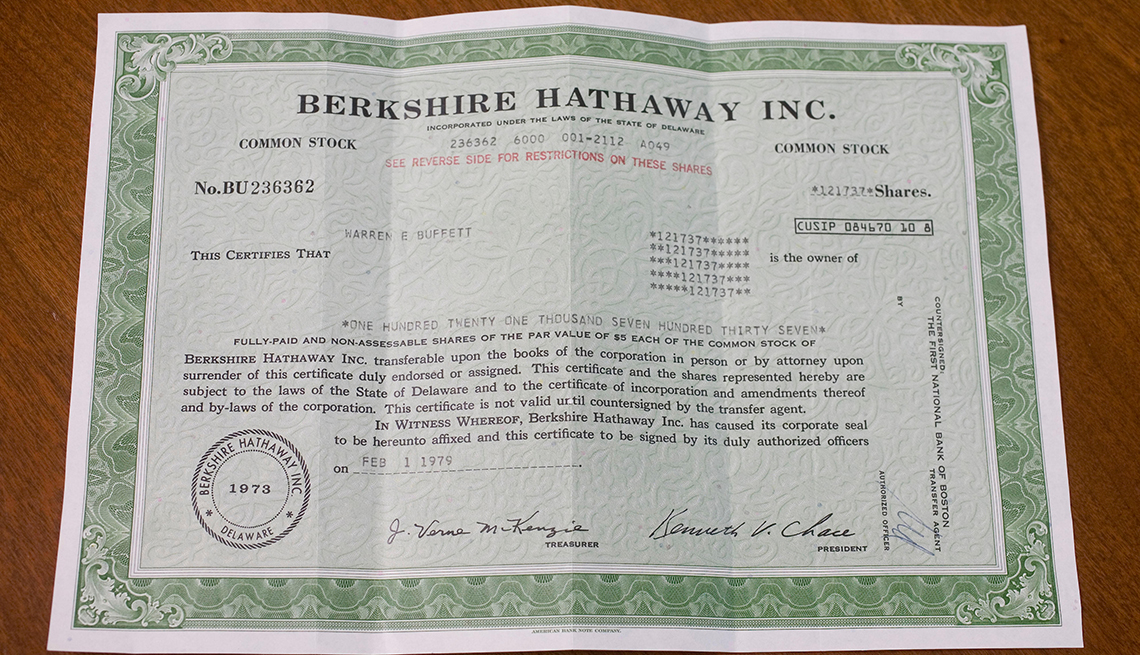 A stock certificate representing 121,737 shares of Class A stock in Berkshire-Hathaway Inc.

An eye for a bargain

Buffett is renowned for bagging some of the great bargains that Wall Street has offered over time. In 1988, Berkshire Hathaway bought shares of Coca-Cola. “We expect to hold these securities for a long time,” Buffett wrote in his 1988 Chairman's Letter to shareholders. Coca-Cola stock is now 9.3 percent of Berkshire Hathaway's holdings, and the shares are worth over $19 billion, according to CNBC's Berkshire Hathaway Portfolio Tracker.

Buffett bought American Express stock in 1963, when the company was wracked by a lending scandal. Berkshire owns 151.6 million shares of the credit-card company, now worth $14.9 billion. In 2016, Berkshire Hathaway added $35 billion of Apple stock to its portfolio; the company's stake in Apple is now worth $124 billion.

Value investing is harder than it sounds, and even a savvy investor like Buffett gets caught buying a business that's cheap because it's not very good. Using Berkshire stock, Buffett paid $443 million in 1993 to buy the Dexter Shoe Company. The Maine-based company stopped producing shoes in the U.S. and Puerto Rico in 2001, and Berkshire tossed the remains of the company into the H.H. Brown Shoe Company.

"What I had assessed as durable competitive advantage vanished within a few years,” Buffett wrote in his 2007 Berkshire annual report. “By using Berkshire stock, I compounded this error hugely.” The Berkshire stock that Buffett used would have been worth $3.5 billion at the time he wrote his Chairman's Letter. “In essence, I gave away 1.6 percent of a wonderful business — one now valued at $220 billion — to buy a worthless business." 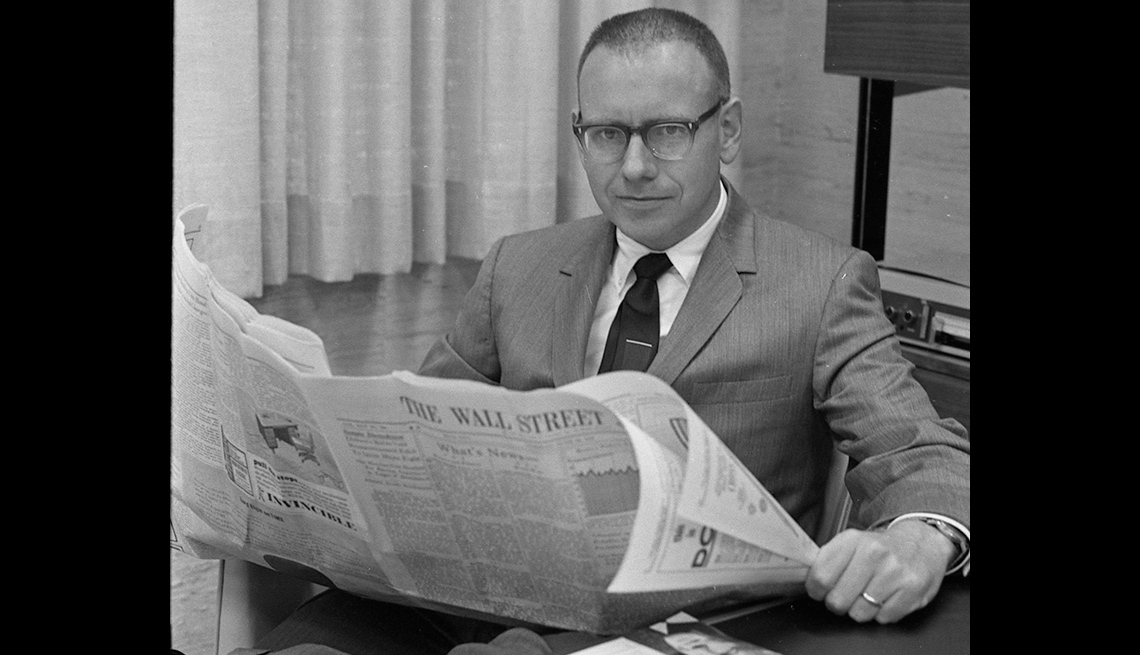 Warren Buffett reading the "Wall St. Journal" newspaper in his office in 1965.

What makes Buffett a super investor?

Start with hard work. When Buffett was a boy, he delivered newspapers, sold golf balls and stamps, and washed cars for extra cash. During his working life, he typically spent 12 hours a day reading, says David Kass, clinical professor of finance at the University of Maryland Robert H. Smith School of Business. “I imagine by now he's down to eight hours a day,” Kass says, “but he's constantly reading financial reports and statements."

Another is training. Buffett's studies with Graham, who is widely known as the “father of value investing,” left a lasting impression. “The basic ideas of investing are to look at stocks as business, use the market's fluctuations to your advantage, and seek a margin of safety,” Buffett said. “That's what Ben Graham taught us. A hundred years from now they will still be the cornerstones of investing."

And finally, there's patience — or what Buffett calls temperament. “Buffett would say, half jokingly, ‘If you have an IQ above 125, sell the extra points,'” says Kass. “That's all you need. After that, it's all temperament.” The patience to hold stocks for the long term is part of what Buffett calls temperament. The other part is to be in control of your emotions. If you're terrified when the stock market is falling, you won't be able to take advantage of stocks selling at bargain prices. If you're euphoric when the market is soaring, you'll pay too much. And in either event, you won't be able to hold stocks for the long term.

The sage of Omaha

Can a man with more than $80 billion in the bank really have the modest, folksy persona that Buffett is known for? Kass, who has followed Buffett since 1980 and brought students to meet him, says yes. “That's who he is,” Kass says. “He's a naturally friendly, warm individual, and has always been that way. He has a great sense of humor and loves to teach — he has said that if he hadn't been a portfolio manager, he'd have been a professor." 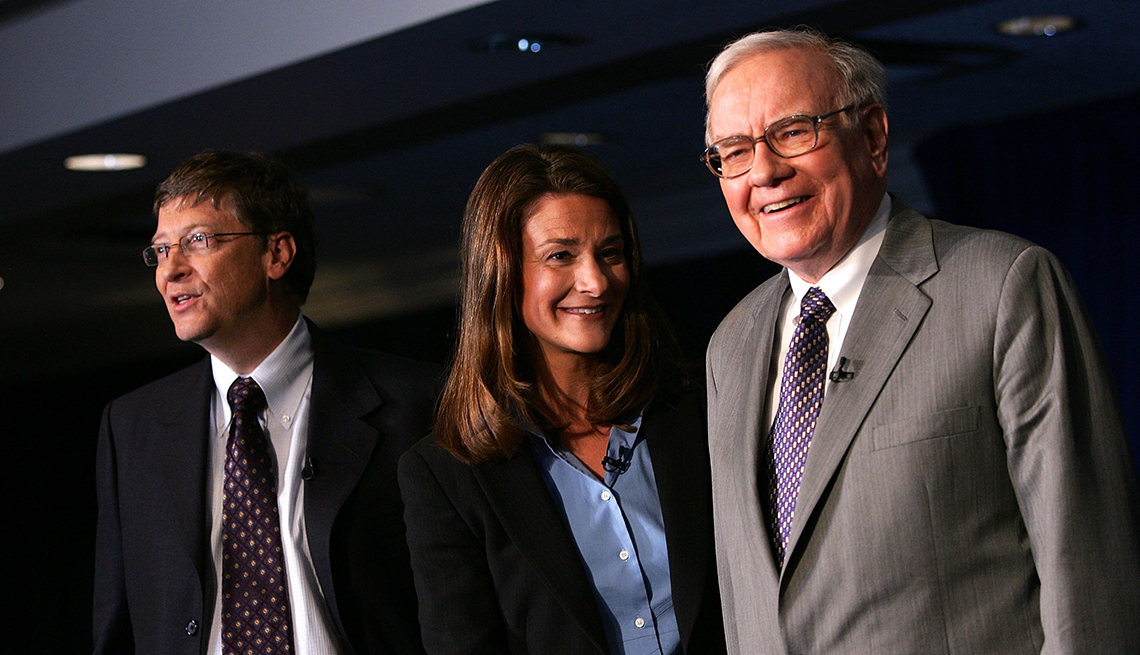 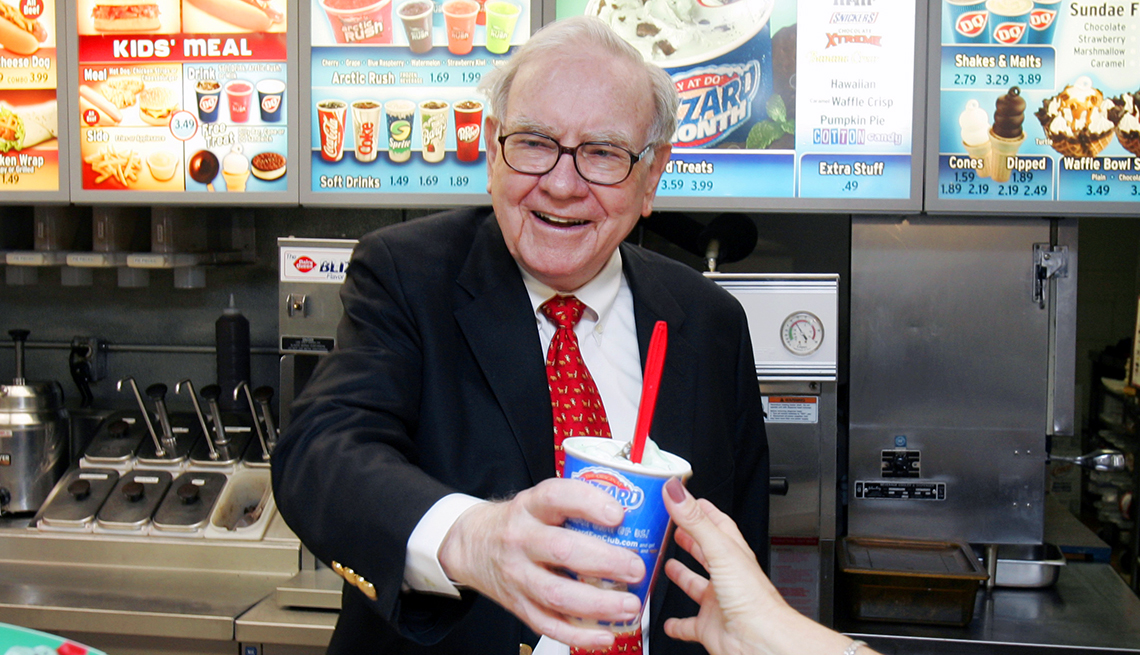 Since 2006, Buffett has given $37 billion worth of Berkshire Hathaway stock to charity, and he plans to give all but 1 percent away, either in life or at his death. He has cofounded (with Bill and Melinda Gates) the Giving Pledge, which has 210 signatories, including such notables as Michael Bloomberg, Carl Ichan and Mark Zuckerberg. Those who sign the Giving Pledge promise to give away at least half their fortune, either in life or at death. “Measured by dollars, this commitment is large,” Buffett wrote in his challenge to other billionaires. “In a comparative sense, though, many individuals give more to others every day.”

He remains modest about his achievements. “I've worked in an economy that rewards someone who saves the lives of others on a battlefield with a medal, rewards a great teacher with thank-you notes from parents, but rewards those who can detect the mispricing of securities with sums reaching into the billions,” he says. “In short, fate's distribution of long straws is wildly capricious. The reaction of my family and me to our extraordinary good fortune is not guilt, but rather gratitude."

Words of wisdom from Warren Buffett

Warren Buffett has always had a way with words, a talent that was sharpened by his years of investing — and completion of a Dale Carnegie course in public speaking. Whether he's giving media interviews or talking to Berkshire Hathaway investors in his annual Chairman's Letter, Buffett's words are always worth heeding. Here are 10 of Buffett's most famous bits of investment advice.