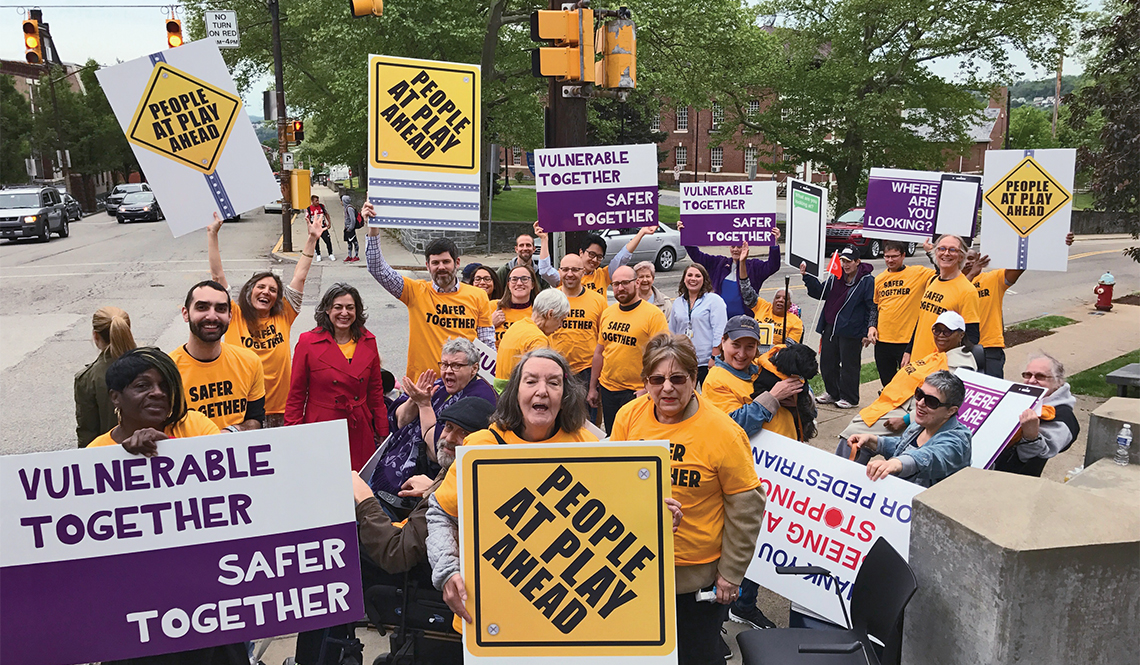 Volunteers with The Crossings, an effort of the grassroots organization Lively Pittsburgh, use creativity and humor to advocate for pedestrian safety.

ACTIVITIES AS OF MARCH 2020

Allegheny County, Pennsylvania, is home to the city of Pittsburgh and 1.2 million people, 16.8 percent of whom are age 65 or older. Nearly half of the county’s residents age 75 or older live alone. The number of residents age 65-plus is expected to increase by 40 percent by 2040.

Reason(s) for Joining: The Southwestern Pennsylvania Partnership for Aging (SWPPA), a three-decade old coalition of people who work in aging, saw the AARP age-friendly network as a way to involve local leaders beyond those already working on aging issues. “Livability and being age-friendly is a community-wide issue,” says Laura Poskin, the director of Age-Friendly Greater Pittsburgh. “We need champions in all of these different sectors.”

The Financials: Age-Friendly Greater Pittsburgh's anchor (or primary) funding comes from the Henry L. Hillman Foundation, a charitable nonprofit with a mission to "inspire, invest in, and leverage great ideas and initiatives for outcomes that improve the quality of life in Pittsburgh and southwestern Pennsylvania."

Greater Pittsburgh developed its three-year, age-friendly action plan in 2017. The steps taken thus far include the following efforts in the transporation, housing and social inclusion domains. 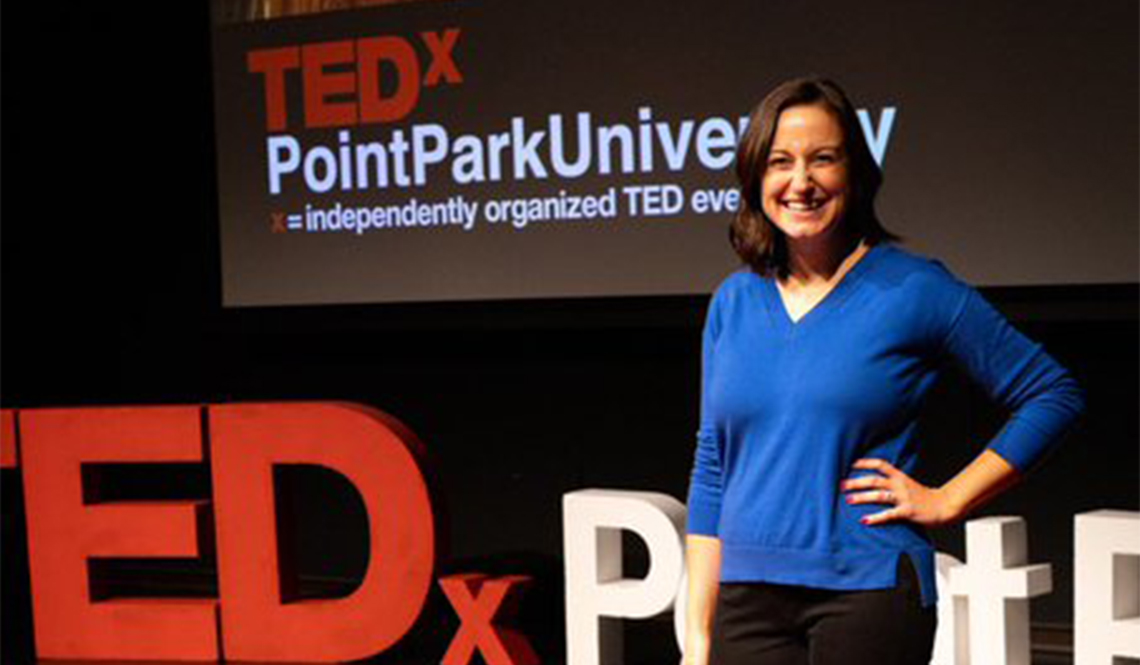 A video of Laura Poskin's TEDx talk, "Reimagining Communities for All Ages," appears at the end of this article.

“To be an age-friendly advocate, you don't have to be a gerontologist. Get to know your neighbors. Bonus points if they’re a different generation. You grow up sitting at the kids’ table. And we tend to move through life with those people. Imagine the richness if we mix that up.”

Taking It to the Streets

Volunteers with The Crossings (pictured above) — a project of Age-Friendly Greater Pittsburgh and the grassroots advocacy group Lively Pittsburgh — use creativity and humor to advocate for pedestrian safety by calling attention to the hazards of crossing streets.

The quick-paced, “pop-up” performances literally take place in the streets. Participants of many ages and abilities gather at a location and, when a traffic signal turns red, rush into the roadway — often using wheelchairs and walkers, or pushing baby strollers — to dance or parade back and forth to show that streets are used by pedestrians and not only people in cars. When the light changes to green, the performers retreat to the sidewalk until a red light prompts a return to their “stage.”

During one performance of The Crossings, a 72-year-old resident named Rose, who uses a motorized wheelchair, pointed at a nearby park and told the gathering: “I’ve lived in this building for five-and-a-half years and I’ve never once attempted to cross the street.” A fellow participant enthusiastically replied, “You are crossing today!”

The demonstration led to conversations with Rose and her neighbors, some of whom had been injured in hit and runs at the intersection. Inspired and assisted by The Crossing troupe, the residents came up with a list of recommendations for the city. And the city listened! The intersection is now equipped with pedestrian signage and curb bulbouts that shorten the crossing distances for pedestrians.

“The Crossings was a success for the physical environment,” says Poskin. “It was also a success because people felt heard. Age-friendly initiatives can end up involving only the people who work in aging or livability, the professionals. But the real professionals are our residents. Lively Pittsburgh is such an important partner because it rallies local residents to come up with grassroots solutions.” (Visit the Lively Pittsburgh website to see The Crossings in action.)

Reaching Out to Bus Drivers and Riders

Age-Friendly Greater Pittsburgh’s transportation work group visited senior centers and asked residents what the county’s bus drivers could do to improve their experiences as passengers.

The team then wrote those comments on posters and, with the approval of the Port Authority of Allegheny County, placed them in the driver break rooms. Among the comments they shared: “I would like drivers to lower the bus without my having to ask.” “I really like when the driver learns my name.”

The Port Authority invited Age-Friendly Greater Pittsburgh to provide training to all new bus drivers. One of the instructors, a health care provider, leads empathy and sensory training. For instance, in order to show the drivers how an older person’s vision might be impacted by age, she has the drivers try on eyeglasses that mimic how an older adult might see.

The team also spent time with the established drivers, including one who shared that some older adults ride the bus without having anywhere to go. They ride to talk to the driver and have a social interaction as part of their day.

A to B Transportation Planning

After answering a set of questions (e.g. "Can you ride in a vehicle that would require you to climb a few steps to get in?" “Do you need assistance beyond the lobby of a public building or into a home?”) a list is generated with recommendations. If someone in need of a ride can’t access the website or needs help using it, the service has a call-in number.

Learn about the AARP Network of Age-Friendly States and Communities

“The planner includes about 30 different transportation providers in Allegheny County and Pittsburgh,” Poskin explains. “There are options, but people don’t know about them.” She adds that ACCESS, the paratransit access program in Allegheny County, had wanted to create such a resource for years. “Turns out, a lot of people — including from the health department and various volunteer ride services — had something similar on their To-Do lists," says Poskin. "By working together, they made it happen.”

“In one of our legislative briefings we featured a cohousing project that's moving forward at the Eden Hall Campus of Chatham University," says Poskin. "It's an intergenerational housing model. Each resident has his or her own home but there are shared spaces, like a dining room where neighbors can intentionally connect with one another. It’s the first of its kind in our region. “

That's both the hashtag and name of an Age-Friendly Greater Pittsburgh initiative that encourages neighbors to meet one another and make new friends over coffee.

“We’re saying, ‘Your coffee shop can be one of those places to meet new people and learn something —look up from your device and connect,'" explains Poskin. "We have table signs that say, 'Join me, I’m open for conversation,' or 'Sorry, I can’t talk, maybe another time.' The point is to combat social isolation and loneliness, which we know impacts people of all ages.”

The reaction, says Poskin, has been that "people are delighted by it. We’ve been able to partner with different organizations and elected officials to put these on. We partnered with a legislator to the Pennsylvania House. She used the gathering as a way to connect with her constituents. She signed some older residents up for free bus passes.”

At a coffee shop gathering in the Pittsburgh neighborhood of Lawrenceville, a spokesman for Lawrenceville United told a local TV station, “We have a lot of legacy residents in the neighborhood, mixed with the new influx of young professionals and people who are returning to the city. So this program is the perfect opportunity to collide worlds.” (Watch a video about the coffee talks and check it out on Facebook page at #CoffeeConnectPGH.)

Starting in March 2020, in response to social distancing measures during the global coronavirus pandemic, Age-Friendly Greater Pittsburgh teamed up with the Jewish Healthcare Foundation, a partner organizaiton, to offer online #CoffeeConnectPGH sessions on Thursday mornings through Virtual Senior Academy

Lessons Learned (and Advice for Others)

"In developing our action plan, we gathered leaders, people who were working in all of the 8 Domains of Livability," explains Poskin. "

“Our biggest challenge is communicating the urgency of this work. There are a lot of competing priorities, but we’re living in a new demographic reality. If we address this now, it’s only going to help us in the future." — Laura Poskin

“We also hosted ‘Aging Your Way’ workshops, led by Lively Pittsburgh, for residents across the county," notes. "We’d ask questions like, ‘What would you need in your community to be able to live there for as long as possible?

"The biggest lesson learned is the more partners, the merrier," Poskin adds. "We’re always welcoming new partners into the mix. We started out engaged with more than 100 organizations and 800 people. The number has exponentially increased since then. As we move forward, we want to be even more intentional in regards to racial inclusion. We’ve had a lot of accolades about Pittsburgh being one of the most livable cities. It is, for some people. We need to accept the challenge that Pittsburgh needs to be livable for everyone, and we’re not right now.

“Our biggest challenge is communicating the urgency of this work. There are a lot of competing priorities, but we’re living in a new demographic reality. If we address this now, it’s only going to help us in the future. If we make the sidewalks better for an 86-year-old, they’re going to be better for a six-year-old. It’s a worthy investment. And it’s not just for older people.”

“Our action plan resonates with a broad group of people," Poskin points out. "A lot of younger people have been interested and see themselves in the plan. There are people I wouldn’t have expected. We have a core group bringing the action plan to life. One member is the founder of a local startup called pathVu. He’s interested in mapping sidewalks and routes for accessibility. Essentially a Google maps for accessible routes. He’s a superstar. That’s someone we wanted to be attracted to our work and he is.”

To both inform and engage the area’s numerous elected leaders (Allegheny County has 130 municipalities), the age-friendly team conducted four legislative briefings during the action plan’s debut year. During one session, the team brought an older bus rider and the driver who told the story about older people riding the bus for social interactions, not to go somewhere. “That story isn’t something you typically hear about in the city council chambers, but we thought it was important for them to hear," says Poskin. "It was a really powerful session.”