Are you over 50 and making a difference? Apply for the AARP Purpose Prize by March 31. 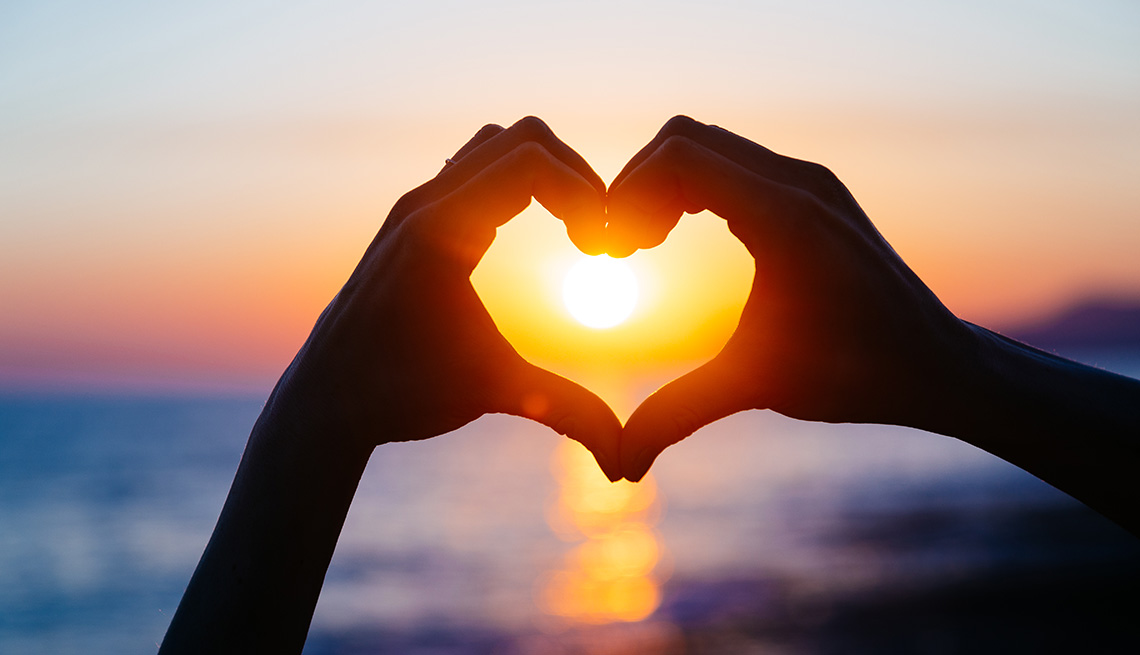 For Sandy Skwirut Hart and Jim Hart, true love began with a dare.

Sandy, now 71, had been dared by friends to join the dating website Match.com. That's where she laid eyes on Jim, whose online profile made clear he was someone she could fall for: devoted to his grandkids, an avid boater, and — crucially — tall enough for her liking.

After communicating through emails and phone calls in early 2018, the couple decided to meet in person. It was clear to both they shared something special. By that October, they were married, and Jim, now 76, moved into Sandy's home in Frankfort, Illinois, where she has lived since 1974.

But the process wasn't seamless. Both had lost spouses to cancer in recent years, so working through grief was part of the package. There have also been some hiccups when it comes to how their grown children reacted to the news.

But overall, they say, their relationship is a new beginning — and one that probably wouldn't have worked out if they had met 25 years ago.

That insight is key to what biological anthropologist and self-help author Helen Fisher, a senior research fellow at the Kinsey Institute, says is one of the central upsides of finding love later in life: Not only do older adults know what they want, they're also less likely than younger counterparts to compromise on what's most important to them.

And with millions of older adults entering the dating scene, experts say that more older adults than ever before are experiencing their own happily-ever-afters, decades beyond the median age of first marriage (30 for men and 28 for women in 2018, according to the U.S. Census Bureau).

That was certainly the case for Diane Julien, 72, and Ron Stainer, 81, of Minnesota.

They aren't married yet, but the pair are set to tie the knot with a private ceremony in Costa Rica in the coming weeks. The exact date is a secret, Julien says, to deter would-be wedding crashers from showing up on their special day. Between them, the couple have five children, 12 grandchildren and five great-grandkids, with another on the way.

Later-in-life romance, let alone destination weddings, weren't the norm even a few decades ago, says Fisher. In generations past, she says, older adults who were widowed were expected not to pursue a romantic relationship at all, but rather jump right into the role of grandparenting.

Things today couldn't be more different. And later love isn't just celebrated, it's also biological reality, says Fisher, who emphasizes that the brain pathways responsible for feelings of intense romantic love are exactly the same “whether you are 2-and-a-half or 92-and-a-half.”

Fisher herself is in her 70s and preparing to get married for the first time. She and her beau split their time in a way known as “living apart together,” or LAT: They maintain separate households in New York City, where they alternate spending time together at each residence, and also some alone. It's a setup she says won't change, even after they say “I do.”

"The beauty of older people is that they can build the kind of partnerships that they want,” Fisher says. “It's not this cookie-cutter thing.”

Helen Fisher, researcher, says the brain pathways responsible for feelings of love are the same “whether you are 2 1/2 or 92 1/2."

Introduce the 'stranger' into your tribe

Starting a new relationship in middle age or beyond, however, also can come with a unique set of challenges, says psychoanalyst Polly Young-Eisendrath, who, along with her late husband, Ed Epstein, created a method of couples therapy that emphasizes close, active listening as a way to help partners communicate and reconnect.

"The difficult, or bad news side, is that you already have a tribe, you have a family, you have children,” she says. “Bringing a new person into the context of your life is sometimes really difficult."

Young-Eisendrath has firsthand experience with later-in-life love. She met her long-term partner after her husband, to whom she was married for 25 years, died in 2014 following a battle with early-onset Alzheimer's (an experience she describes in her memoir The Present Heart: A Memoir of Love, Loss, and Discovery).

Her advice for older adults entering into new partnerships? “Be aware that you need to cultivate this relationship freshly,” she says. “Show up with each other's tribe, get to know each other's history and children."

Relationship expert Andrea Syrtash, author of He's Just Not Your Type (and That's a Good Thing): How to Find Love Where You Least Expect It, also emphasizes the role that past relationships can have on later-in-life love. Her take on the adage about loving and losing? “It's better to have loved and learned,” she says, than to have never loved at all. “What's the point of losing if you're not learning?”

For Emeline Pickands, 78, loss itself was the circumstance that brought her and husband, Ron, 84, together. The couple, who live outside Chicago, came to know each other through a group for widows and widowers (both had lost a spouse to cancer), and their romance bloomed from there.

Still, Pickands had to overcome her initial hesitation about the prospect of getting married again. That is, she says, until she realized life was “way too short” to let her doubts keep her from saying “I do,” which the couple did on Valentine's Day in 2002. (Naturally, the bride wore red.)

Now approaching their 18th wedding anniversary, Pickands looks back to their 10th anniversary in 2012 as the source of the best gift she ever received: not a fancy gift or trip, but her husband's safe recovery after a harrowing heart valve replacement surgery.

"I call him my sunshine guy,” Pickands says. “I love him very much."

Editor's note: This article was originally published on Feb. 11, 2020. It has been updated with correct last names for the couple Sandy and Jim.

Look who found new love at 50 and older

More on Friends and Family