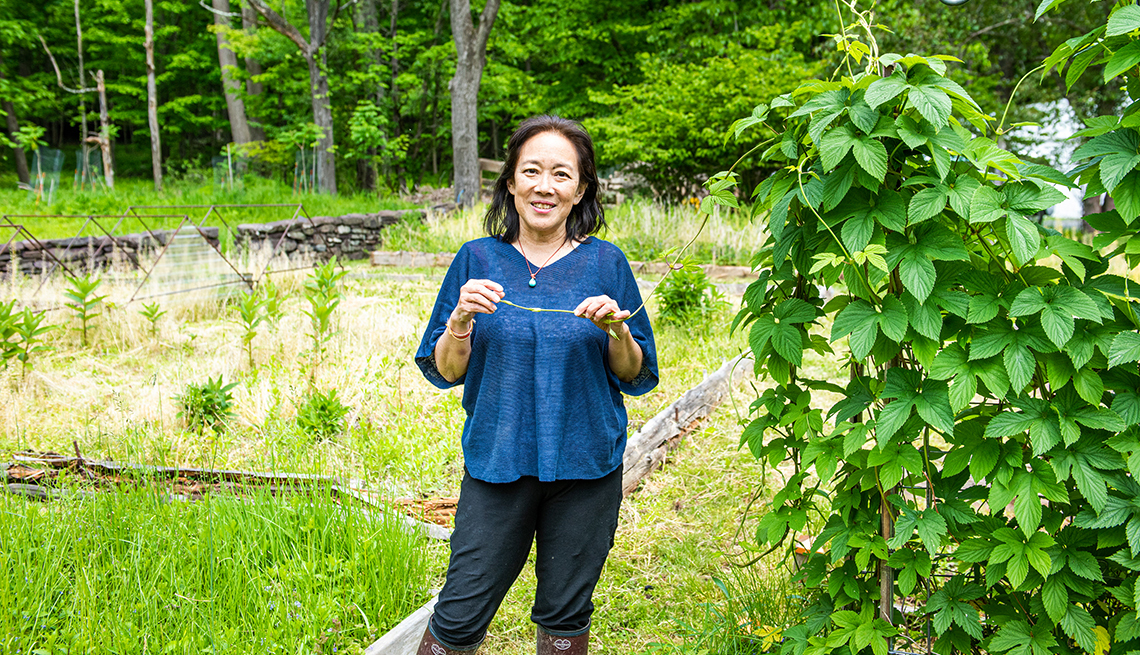 None of this would have happened if I weren't such a bad gardener. Nearly 20 years ago, after years of living abroad, my husband and I moved our three daughters to New Jersey and bought a fixer-upper on 28 acres. As soon as we moved in, I started a vegetable garden, but everything I planted died. I'm not the sort of person who pays attention all the time, you know? I'd plant something, and the next time I'd check on it, I'd find it all shriveled up. So I started getting interested in the plants growing wild on the property. I really geeked out on it — I ended up working with top local ecologists and the state government to map the plants of New Jersey. This was in addition to the banking job I had then.

At first I wanted to get rid of the non-native species on our land. But then my father had some Japanese professors over to visit, and when I told them we had invasive Japanese knotweed, one of them said, “In Japan we eat this. It's really good.” A light bulb turned on for me. I realized I was trying to battle these plants that can be eaten, that other people see value in. It turns out that some of the most healthful plants to eat are the ones that grow wild. Purslane, which has a lemony flavor, and lamb's-quarter, which tastes sort of nutty, are both loaded with omega-3 fatty acids.

The problem was that I couldn't find good recipes. I got some cookbooks for foraged foods, but the recipes were awful. They had instructions like, “Boil three times to reduce bitterness.” My family wouldn't eat the dishes I made.

Through friends I ended up meeting Eddy Leroux, the chef at Restaurant Daniel in New York City, and he was really interested in the edible plants I was finding. He said, “Bring me everything. I'll pay you.” And I replied, “I don't want you to pay me. I want recipes.” He thought I was really weird: She doesn't want money; she just wants some dumb recipes. Meanwhile, I was thinking, This guy's going to give me free recipes just for bringing in my weeds! I had 220-plus edible plants in my meadow, and he wanted to try all of them, so I started bringing him different ones every week, on my way to work. By the end of the year, we had a huge dossier of recipes. Eventually, we were invited to write a cookbook, and I was the one who tested every recipe. If it was too hard for my middle daughter to make, it didn't go into the book. 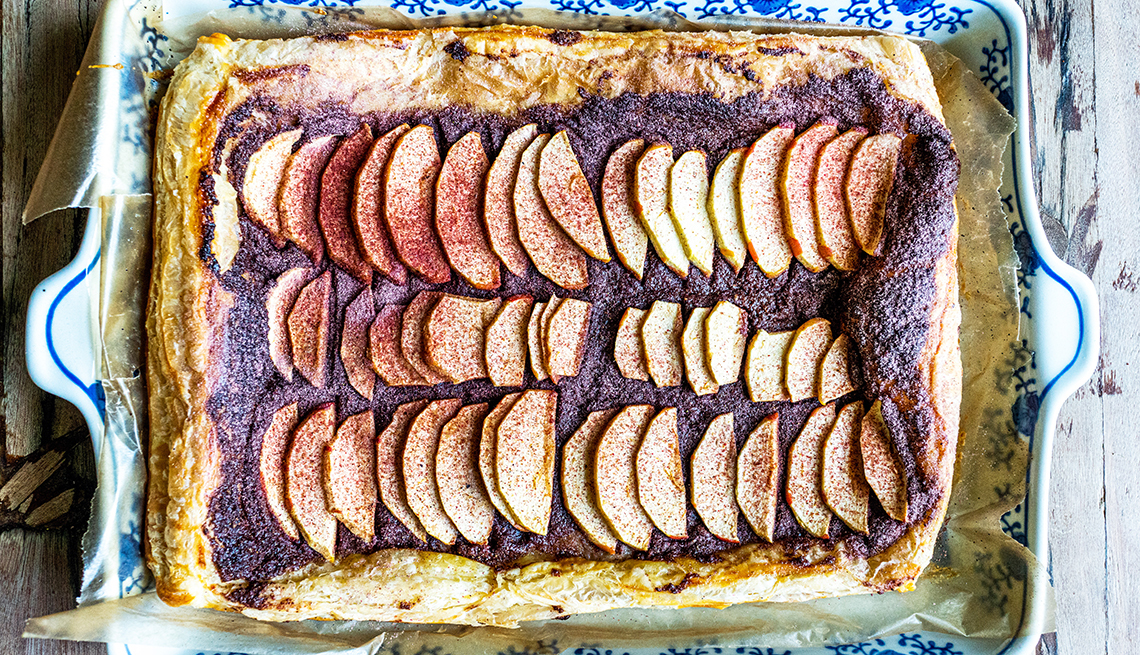 1. Heat oven to 375° F. Roll out dough on parchment paper to fit inside 13-by-18-inch baking sheet. Pinch edges so they are slightly raised. Brush entire surface with beaten egg.

3. Bake for 10 minutes. Decrease oven temperature to 325° F; bake for 20 to 25 minutes, until tart is puffed and golden on top and apples are cooked. Remove from oven; let cool for 30 minutes.

* To substitute store-bought Middle Eastern or Turkish sumac spice, reduce the amount by half and add sugar to taste, so the spice mixture is tart but not sour. 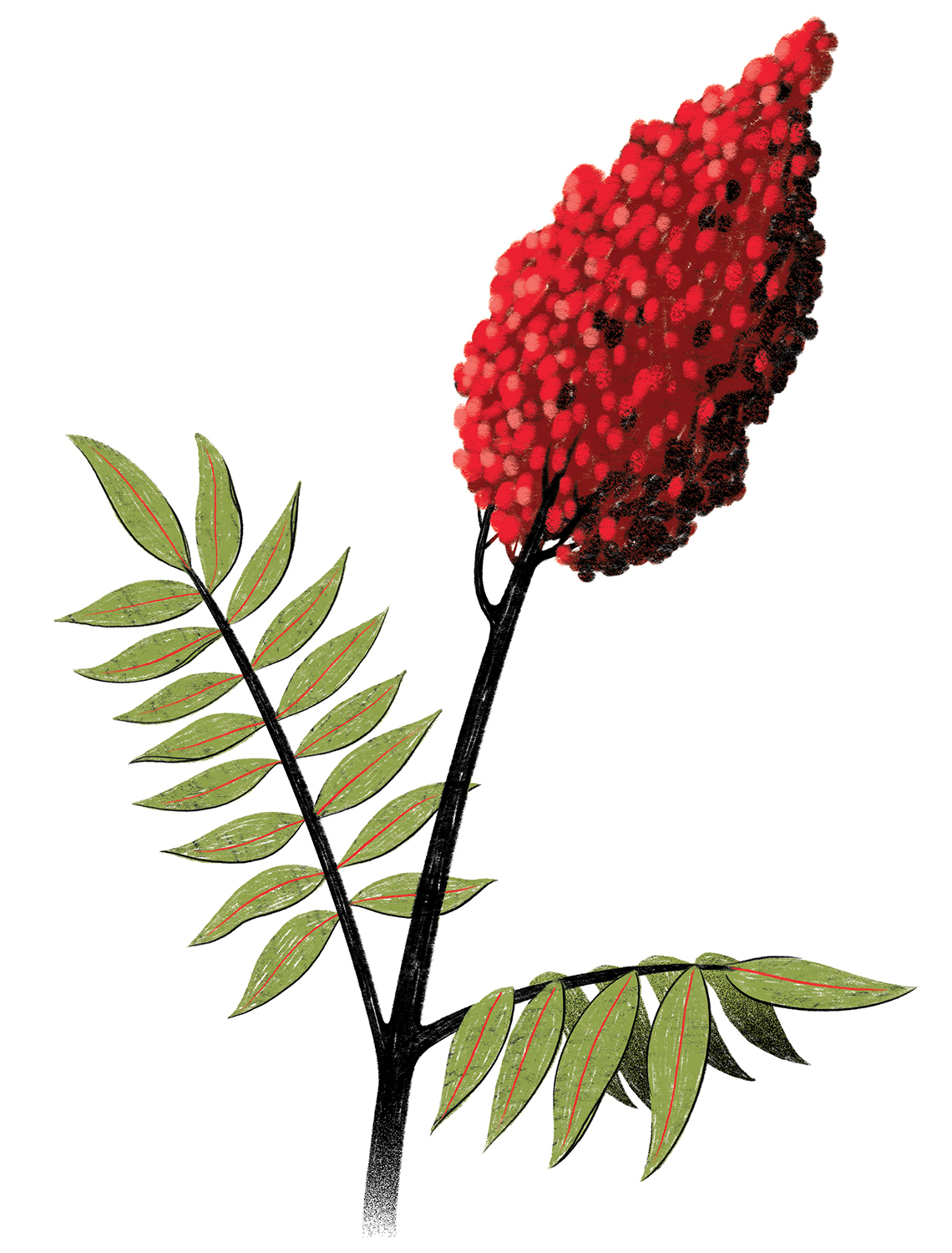 How to Make the Spice

To make American sumac spice, remove the center stems of the red sumac cluster, so the berries are generally loose. Put them into a dehydrator or oven at the lowest setting for at least 3 hours or until dry. Grind the dried berries in a coffee or spice grinder, and push them through a mesh sieve to remove the larger seeds. Store in an airtight container.

This apple tart is made with the dark-red fruit of the staghorn sumac tree, which has a citrusy zing. Sumac is a common flavoring in Middle Eastern food, but sometimes people are afraid to forage for it because it shares a name with poison sumac. You can't really get the two plants confused, though. Poison sumac is a bush or tree with white berries that grows in wetlands. The staghorn sumac is a fast-growing weed tree that prefers dry land. Its fruit is milder than the Middle Eastern sumac that you can find on the spice rack or purchase from specialty stores or online.

Foraging is different from harvesting from a garden. You're out there for hours, and you get to know that plant so well — its behavior, how it functions, every little aspect. We've lost that intimacy with the plants that are around us because we're always rushing. For me, foraging helps reconnect you to the rhythm of things, to the planet. Once you get that in you, you can't go back to being in an office. I couldn't, anyway. I ended up leaving my job and becoming a full-time forager for restaurants and grocers. People are becoming more aware of these foods now — they're sort of trendy. So my daughters were impressed with my new career. They were, like, “Mom, you actually became cool.” —As told to Shayla Martin

Tama Matsuoka Wong, 60, is the coauthor, with Eddy Leroux, of the cookbook Foraged Flavor, from which this recipe is adapted.