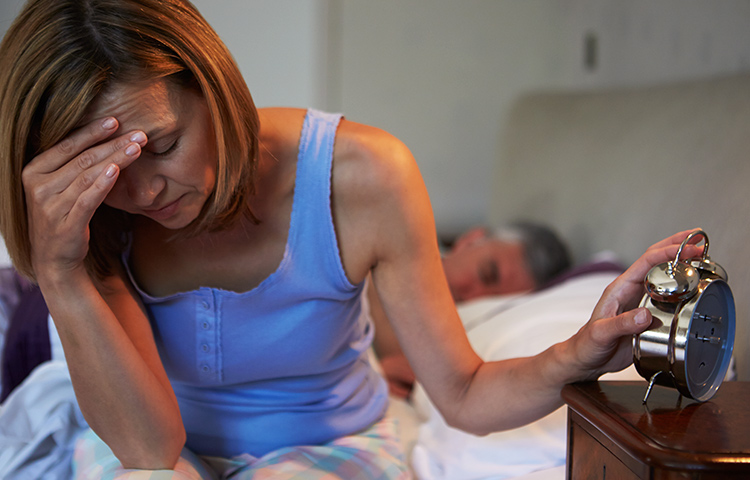 Menopause can cause sleep challenges such as hot flashes and night sweats.

Do you climb into bed exhausted at night, count sheep until the cows come home and still find yourself unable to sleep? If you’re a middle-aged woman, you certainly aren’t alone.

A new government analysis has discovered that more than 1 in 4 women in their 40s and 50s have a tough time falling and staying asleep four or more times during the week. More than a third of these women say that, on average, they are getting less than seven hours of sleep per night. Perimenopausal women — or those no longer menstruating and entering menopause — reported the most difficulties with sleep, following by postmenopausal women.

“I was surprised to learn that nearly 1 in 2 women (in the report) did not wake up feeling well rested four times or more in the past week,” Anjel Vahratian, author of the report and chief of data analysis for the National Center for Health Statistics, told CNN.

The report noted that “women may be particularly vulnerable to sleep problems during times of reproductive hormonal change, such as after [menopause].”

The report was derived from data on 2,852 nonpregnant women between ages 40 and 59 who participated in the 2015 National Health Interview Survey.

Experts recommend that middle-aged women get between seven and nine hours of sleep every night.

When it comes to menopause, sleep challenges are often associated with hot flashes and night sweats. To improve your chances of falling and staying asleep, try working aerobic exercise into your weekly routine on a regular basis. Avoid caffeine, which can take eight hours to leave your system, and keep your bedroom cool enough to ward off hot flashes. Also steer clear of foods high in fat and fried foods that take longer to digest and can lead to discomfort that interferes with sleep.

Generally speaking, poor sleep can result in a whole host of health problems. Indeed another new but separate study out of the University of Oxford in Britain has found that people who get inadequate sleep are at a higher risk of paranoia, anxiety and depression.

“Sleep problems are very common in people with mental health disorders, but for too long insomnia has been trivialized as merely a symptom, rather than a cause, of psychological difficulties,” lead author Daniel Freeman wrote. “This study turns that old idea on its head, showing that insomnia may actually be a contributory cause of mental health problems.”