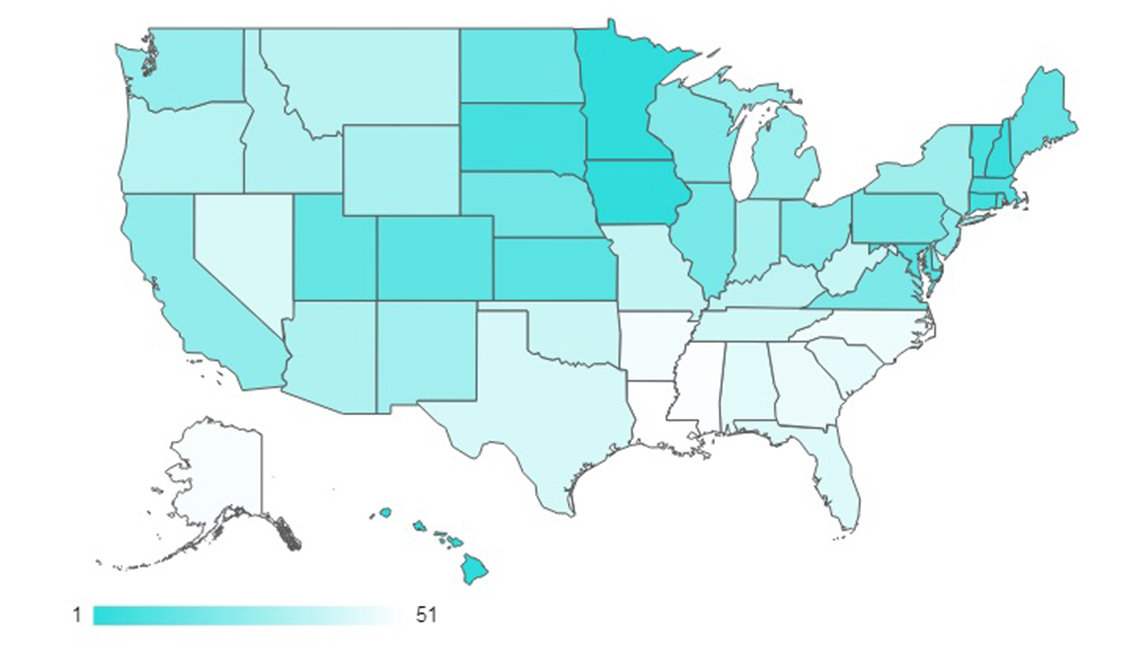 Hawaii, Iowa and Minnesota rank among the top states for overall health care, according to a new study.

To determine where Americans are receiving the best health care, WalletHub analyzed all 50 states and the District of Columbia, using 35 measures of cost, accessibility and outcome. The measures included monthly insurance premiums, cost of visiting a medical professional, quality of hospitals, life expectancy and rates of cancer and heart disease.

While WalletHub did not focus specifically on health care for people 50 and older, analysts at the Washington, D.C.-based personal finance website discovered that some states offer more services and lower costs for older Americans.

"When looking at retirees' health care needs, South Dakota has the highest number of health care facilities and New Hampshire has the highest percentage of senior citizens in good health at 83 percent," WalletHub analyst Jill Gonzalez told AARP. "We found that Alabama is the best state when it comes to adult day care, clocking in cost-wise at around $7,000 per year. Louisiana has the lowest cost for in-home services, at almost $35,000 per year."

She also noted that "Hawaii has the highest life expectancy at over 81 years and the lowest death rate among senior citizens. Minnesota has the second-lowest percentage of retirees with disabilities at 32 percent, and the third-best public hospital system."

For the general population, a number of states ranked high in specific categories — including Arizona, which was at the top for lowest average monthly insurance premiums. The lowest cancer rate is in New Mexico, and Hawaii has the lowest heart disease rate. South Dakota shines when it comes to its number of nurses, almost 1,700 per 100,000 residents, and its number of dentists, over 40 per 100,000 residents.

Check out WalletHub's interactive map to see where your state ranks.