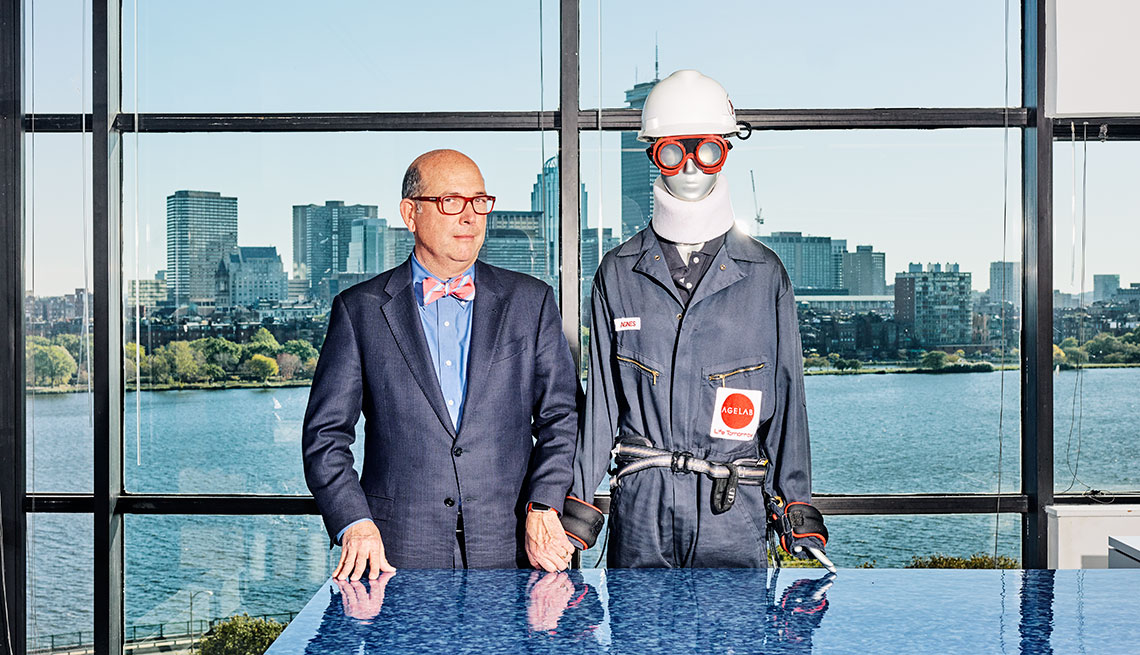 Joseph Coughlin created AGNES, a suit that attempts to convey some of the physical issues faced by many people in their late 70s and older.

Joseph Coughlin is a man you want on your side. He is one of the world’s foremost experts on aging and the founder and director of the Massachusetts Institute of Technology’s AgeLab. Up in Cambridge, Massachusetts, “Dr. Joe” directs teams of brilliant young designers, engineers, social scientists, doctors and researchers who study this complex subject with intellectual ferocity. Lucky for you — and for us — Joe, who is 56, also serves as a member of the board of directors of AARP.

A tireless researcher himself, Joe has written more than 100 scholarly papers, as well as a book on aging and transportation. Through his lab, he has created groundbreaking tools to teach the young the challenges of life as an older person. One of his most notable advances is AGNES, the student-named suit that attempts to convey some of the physical issues faced by many people in their late 70s and older, the better for the brainiacs to study them. When you step into AGNES’ shoes — and gloves and goggles — it’s a little harder to see, hear, bend and manipulate tiny cellphone buttons. She’s an instant compassion machine for millennial whiz kids.

But what I particularly want to tell you about is Joe’s important new book — The Longevity Economy: Unlocking the World’s Fastest-Growing, Most Misunderstood Market — which he described to me as “a call to arms and instruction manual for how to redefine old age as an opportunity.” We’re living longer than ever, he says, and these bonus years are opening up vast new possibilities for products, services and experiences. “But most businesses are stuck in an outdated mind-set,” he adds, “and can conceive of the ‘older market’ solely in terms of health care and senior housing.”

"With astonishing speed, a new, better story will replace our current narrative of aging.”

“Old age is a myth,” Joe says. “While there are certainly physical and existential realities to aging, we have been taught the false narrative that to be old is to be a taker, never a giver.” That’s despite the fact that we, the people over age 50, are working, playing, volunteering, donating, buying stuff and contributing to a better world to the tune of $7.6 trillion in 2015, well over half of all U.S. consumer spending. Boomers alone control 70 percent of the disposable income in this country.

In fact, we are frequently cast as a modern society’s burden. We, the walking, talking proof of humankind’s greatest success — longer lives! — will crash the health care system, drain Social Security and wreck the economy itself, critics warn. It’s a set of pernicious stereotypes about aging that needs to be challenged now, Joe says, and that’s what he set out to do in this book.

Sad, too, that the f-word never gets much of a workout when talking about getting older. The f-word as in F-U-N, Joe notes. “Building the future of fun in a society where 100 years old is the new normal is perhaps the longevity economy’s largest growth opportunity.”

As Joe says, this is not just about the old — it’s about all of us. With Joe on our side, it’s not a bad time to be getting old.