En español | Like millions of American men, Brian Hines, 64, has a yearly ritual. Every fall, the Salem, Ore., resident has his blood checked for PSA (prostate-specific antigen), a protein that can be an early warning sign of prostate cancer. So far his numbers have always been low, generally a sign that his prostate is healthy and cancer-free. 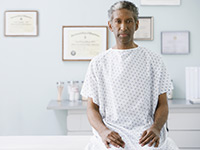 But now, Hines says he might skip the test because it may do nothing more than "buy you a ticket for the treatment merry-go-round."

Many general practitioners and urologists still recommend regular PSA testing for all men, starting at about age 50 until age 70 to 75. But other physicians — including many prominent experts on the front lines against cancer — see the PSA as a highly flawed test that saves few lives while turning many men into cancer patients, with all the chemotherapy, radiation and surgery that can come with the territory.

On the whole, the tide is turning against the PSA. The American Cancer Society and other groups currently recommend that men discuss the test with their doctors, which is far from an enthusiastic endorsement. "No credible organization in the U.S. actually recommends that men get screened for prostate cancer" without a thorough discussion of the pros and cons, says Otis Brawley, M.D., chief medical officer of the American Cancer Society.

In May the U.S. Preventive Services Task Force, an independent panel of experts, concluded in a report that doctors shouldn't offer the test to healthy men. Some in the public accused the task force of trying to save money at the expense of men's lives. But Timothy Wilt, M.D., lead author of the report and a professor of medicine at the University of Minnesota, says that, by congressional mandate, the task force considered only the evidence, not costs.

"Patients believe that detecting cancers is always good for them," Wilt says. "But in the case of prostate cancer, there is good scientific evidence that the benefits don't outweigh the harms."

To clarify, doctors agree that the PSA helps monitor men who are being treated for prostate cancer. And if a man has symptoms of possible prostate cancer, a PSA test can help determine the next step. The controversy comes when doctors give the test to men with no symptoms.

Many apparently healthy men do, in fact, have hidden prostate cancer. Autopsy studies have found signs of the disease in about 45 percent of American men in their 50s. And as men get older, their risk soars. "Just about every man will have some evidence of prostate cancer if he lives long enough," says H. Gilbert Welch, M.D., professor of medicine at Dartmouth's Geisel School of Medicine. He adds that about 97 percent of American men die from something other than prostate cancer, which means any given man is far more likely to die with the disease than from it.

The PSA test is notoriously unreliable. Doctors often recommend biopsies for men who have a PSA count over 4. But many other things besides prostate cancer can lead to a high PSA, including an enlarged prostate, inflammation of the prostate, some medications and even riding a bicycle. The National Cancer Institute reports most men with an elevated PSA level turn out not to have prostate cancer; only about 25 percent of men who have a biopsy due to an elevated PSA level actually have prostate cancer. At the same time, a small percentage of men with "normal" PSAs actually have aggressive, high-grade cancer.

The lifesaving power of the PSA test is far from certain. One study that followed more than 76,000 American men for over 10 years found no evidence that PSA tests saved lives. A larger European study concluded that only a single life could potentially be saved by regularly screening more than 1,000 men for many years.

Next: What are the risks for the PSA test? »

But Ian Thompson, M.D., director of the Cancer Therapy & Research Center at the University of Texas Health Science Center at San Antonio, still believes screening can save lives. He says that both major studies had significant flaws, and he notes that the death rate from prostate cancer has dropped steadily since the PSA test was popularized in the early '90s.

Brawley, however, points out that prostate cancer deaths have been dropping all over the world — even in countries where the PSA test is rarely used, such as Great Britain. He credits the progress to better treatments and, perhaps, a change in the way doctors record cause of death.

The benefits of PSA tests may be murky, but the risks are undeniable. Brian Hines is right: A positive PSA test can be a ticket for treatment. It often starts with a needle biopsy, a procedure in which a doctor inserts a needle — usually through the wall of the rectum — to remove tissue samples from the prostate. The procedure is uncomfortable and can cause bleeding and infection. If the biopsy confirms cancer, the next step is often radiation or surgical removal of the prostate, a serious operation that can leave a man facing impotence, incontinence or both.

It seems obvious that catching a cancer early gives patients the best chance to beat their disease. But prostate cancer isn't like a lot of other cancers. It is often very small and slow-growing, with no intention of spreading. And some prostate cancers grow extremely fast — so fast that it's hard to catch them before it's too late.

"Many men deeply believe the PSA test saved their lives. But for many men, that's almost certainly not the case," says Barnett Kramer, M.D., director of the National Cancer Institute's Division of Cancer Prevention.

Unfortunately, there's no way to know for sure whether any particular cancer is harmless or dangerous while it's still in the prostate, so many men end up getting treated just to stay on the safe side. But many experts now argue that even if cancer is detected, men still need to weigh the risks and benefits of treatment. They advocate a period of "watchful waiting" to see whether symptoms arise, or "active surveillance," which involves exams, tests and biopsies that monitor the cancer.

So what to do? Brawley urges men to watch for signs of prostate problems. And men can still get the PSA test if they want it. "You need to go with how you feel about prostate cancer," he says. Some doctors strongly encourage PSA testing for people at high risk for the disease, including African Americans and men with a family history of the disease.

Brawley is a PSA skeptic, but he's a firm believer in a prostate-friendly lifestyle. While there's no firm proof yet that a man can do much to prevent this cancer, Brawley says, "I believe that eating a diet high in fruits and vegetables, exercising three to five times a week, and keeping a BMI [body mass index] around 25 are all good for prostate health." He adds, "I wish I could know it. But I believe it."

Chris Woolston is a health writer whose work has frequently appeared in the Los Angeles Times.

Experts say many men ignore these signs because they fear prostate cancer. But a common cause of some of these symptoms is an enlarged prostate, often an easily treated condition. If it's something more serious, that's worth knowing, too.