En español | Start into Michael Moss's new book, Salt Sugar Fat, and you may start roaming your grocery store aisles with a carefully drawn map. The book is a thorough investigation of how the food industry creates addictive products with those three ingredients, and how they are marketed to consumers who gulp them up faster than a 16-ounce Slurpee. Here, Moss, a Pulitzer Prize-winning reporter, talks about what he found. 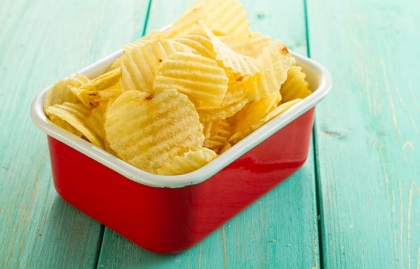 Addicted to potato chips? That's because they're loaded with salt, saturated fat and sugar.

Q: What surprised you most as you researched the book?
A: How top officials at the food giants don't eat their own products. Or they stop eating them when they face their own personal health crisis. I came across this early in my reporting, so I started to ask everyone I met and interviewed about their own diets. Frito-Lay's top scientist abstained from chips, kind of willing himself to resist the great salty taste. And the former president of Coca-Cola deployed a whole health regime for his own personal life, from yoga to fresh carrots as snacks — which he also began marketing to make up for all the years he spent pushing sodas on kids.

Q: What should readers do with all this evidence that the food industry manipulates us into unhealthy eating?
A: Good ideas include spending more time on the outer aisles of the grocery store, where the fruits and vegetables are placed, and being on red alert in the middle aisles — especially [products] at eye level because that's where they put the items with the biggest levels of salt, sugar and fat. As powerful as the food giants are, ultimately it's we who choose what to buy, and how often, and that's a really powerful thing.

Q: How did we end up with so much salt in our processed foods?
A: I was surprised to learn that we aren't born liking salt — that comes when we're maybe 6 months old. And our liking for salt appears to be hugely influenced by the food industry, which is totally hooked on it as a cheap, sort of miracle additive that lets them avoid more costly ingredients like fresh herbs and spices. That's why three-quarters of our salt comes from processed foods, not the salt shaker, and why the industry has refused to cut back on it.

Q: What do you say to people who don't want to give up the convenience of processed foods, where you find the most salt, sugar and fat?
A: There have been some studies that show that "convenience" foods are not the time savers that people think they are. You can make food a slightly bigger part of your life and it will have a huge effect on your health. So instead of trying to save five minutes of your cooking time, cut five minutes out of another activity and I think the results could be remarkable.

Q: What product did you find to be the most egregious example of a bad-for-you processed food?
A: I have to say that the perfectly addictive food is the potato chip. They're salty, which hits your tongue immediately with this great rush to the brain, and they're loaded with saturated fat — or many of them are — which your brain also craves for energy. But the surprising thing about chips is that they're also loaded with sugar, not because of anything added but because of the kind of carbohydrate that they have that instantly turns to sugar in your body. You're getting all three of those [ingredients] with each chip — which is certainly why I love potato chips, and why Frito-Lay coined the [slogan] "Bet you can't eat just one." That may not be the most evil food, but it's certainly the most seductive.

Q: Do you find that you've stopped eating potato chips since working on the book?
A: No! [Laughs.] Not at all! I mean, I'm not anti-junk food. It's about being careful, and knowing all that the food giants do that could compel you to overindulge and overeat. A handful of chips — if you can keep it to that — is not going to hurt anybody. The key is, of course, if you can keep it to that.