Marlo Thomas grew up laughing. That's the title of her 2010 book and it's the story of her life. She's an actress (now getting great reviews for her stage work in Broadway's Relatively Speaking), an activist, a writer and, for the last year, a growing online presence with her website MarloThomas.com. In all her roles — including that of wife to former talk-show host Phil Donahue — humor is at play. How could it not be when your father was stand-up comedian and TV star Danny Thomas (Make Room for Daddy), or when, as a girl, you might come home to find Milton Berle or George Burns at the family dining table? 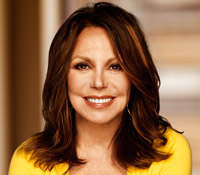 Laughter enriched Thomas' life and now she wants it to enrich ours. Her new AARP.org page, Marlo Thomas' Good Laugh, is a place for her to do just that. Every week on Mondays and Thursdays she will share cartoons, jokes — anything that elicits a chuckle, and many of them laughs she got from famous friends, such as comedian Robin Williams. She talks about what humor means to her and why it is important.

Q: Please talk about how humor enriched your life.

A: It did two things. It made me an optimist because when you can see the humor in life, you don't see only the bad side of a situation; you see the funny side, too. I don't wallow in the dark side of something.

Second, humor is a cushion for life. I remember vividly [when] I was a little girl and I fell down and scraped my knee — I was about 6 years old — and I was on the ground crying and my father said, "Oh, honey, don't cry, it could've been a lot worse." And I said, "How could it have been worse?" and he said, "It could have happened to me."

Q: I can only imagine what your dining room table was like. Was there competition among the old comedians telling jokes?

A: One of the things I loved about them was when one guy had "the floor", as they called it, whether it was at the table or at a nightclub, the rest of them listened. It's something I learned from them. When someone's telling a story I never interrupt them. They enjoyed the pleasure of the story, they wanted to hear how this person told the story. There was no "I've heard that before" or "I know how that ends." It was a craft and enjoying the craft of storytelling was as much fun as what the punchline was.

Q. Storytelling is something you do. You tell stories on your website, marlothomas.com.

A: It's what I love about my website. I'm telling stories from my life and encouraging other people to tell like stories from their lives. That's the feature I'm having the most fun with. Even if I post on men behaving badly or bullying — serious subjects — I'm fascinated with the engagement.

Q: Your voice is very distinct and the topics varied. All this Web writing must take time.

A: Way more time than I expected! But something else has happened. Once I found that I could write about anything I wanted to write about … what you're seeing is me unbridled, just writing about whatever I want — that's excited me. You'll notice most of my pieces have some humor in them. The format allows me to be who I really am.

Q. Do you think a sense of humor is something we are just born with or can it be developed?

A: I think most everybody has an innate sense of humor. I've never met someone who never laughs. It's just that most people don't seek humor out. I really do. I go to comedy clubs. I go to comedy movies. I read joke books. I like comedy. I read Jerry Seinfeld's book, Billy Crystal's book, Chris Rock's book, all those comedians, Steve Martin, Tina Fey. ... One of the secrets about a sense of humor is to unleash it, to open it up, to make room for it in your life

Q. You certainly do that.

A: My book Growing Up Laughing is loaded with jokes because I think it's great to tell a joke to somebody; there's nothing better in the world than hearing laughter. If you are in a theater and you hear other people laugh, it makes you laugh — it's why they put laugh tracks on television shows.

It makes me happy to hear other people laugh. That's why I'm so excited about this new feature we're doing; Marlo Thomas' Good Laugh. And it's not just all jokes. Laughing can come from situations. It could be from something that's real, like a sign on the highway that's really inappropriate and makes you laugh. A joke is something constructed specially to make you laugh, but laughing also comes from the surprise. Comedians always say the biggest compliment they can give if you tell them a joke is, "Oh, I didn't see that coming." Or if it wasn't a good joke, they say, "Oh, I saw that coming right away." It's the surprise that makes somebody laugh.