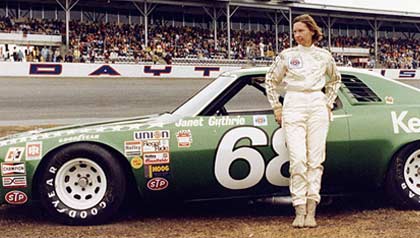 At the Daytona International Speedway on Feb. 20, 1977, Janet Guthrie was just months away from breaking the Indianapolis 500 gender barrier and driving into history.

"Gentlemen, start your engines" was an ironclad tradition at the Indianapolis 500 — until Janet Guthrie drove her way into the 33-car grid 34 year ago.

There had been women in long-distance racing as far back as 1888 and in European open-wheel Formula One racing in 1958.

And by Sunday, May 29, 1977, Guthrie already had raced sports cars, had driven in an IndyCar race in Trenton, N.J., and had raced on a stock car super-speedway.

But when she challenged the all-male fraternity at the Indianapolis Motor Speedway that year, drivers and fans chose up sides over whether a woman belonged in the cockpit of an Indy car.

Track owner Tony Hulman figured out a way to maintain tradition, yet modernize it. "In company with the first lady ever to qualify at Indianapolis," he intoned, "gentlemen, start your engines."

It was the best finish by a woman until 2005, when rookie Danica Patrick started and finished fourth. Seven women now have competed in the Indy 500. Since 2007 the call has been, "Ladies and gentlemen, start your engines."

Guthrie, now 73, "knew at the very beginning that I was not allowed to make any mistakes," she told the AARP Bulletin from her home in Aspen, Colo. "If I'd done in my first Indianapolis 500 what Danica did in hers — spinning out, taking one or two other drivers with her, stalling on a pit stop — if I'd done those things, there wouldn't be a woman at Indy to this day."

Her father managed an airport in Iowa when she was born in 1938. Within three years he was a pilot for Eastern Air Lines and the family was living on the outskirts of a small, tourist-driven Miami, Fla.

"We were far out in the country, surrounded by piney woods," she said. "My only playmates were my little brothers and sisters. I was born adventurous and grew up insufficiently socialized."

She piloted a plane at 13, made her first parachute jump at 16, had a pilot's license at 17 and, by the time she earned a degree in physics at the University of Michigan in 1960, she had a commercial pilot's license and was a qualified flight instructor.

Guthrie became a research and development engineer at Republic Aviation on Long Island, N.Y. In 1964 she applied to join the scientist astronaut program and made it through the first elimination round.

By then she had bought a used Jaguar XK140 and was competing in Sports Car Club of America events. Racing gradually became a priority; by 1972 she was at it full time.

Next: Male drivers greet Guthrie with resentment and disdain. >>

"There was the experience of handling high-powered machinery in an environment that posed certain hazards just to keep things interesting," Guthrie said, "and there was the direct person-to-person competition. That was really what made racing so very compelling."

Guthrie had planned to race at Indianapolis a year earlier, but her car was so lacking in power that she didn't even try to qualify. Even so, she was greeted that year with resentment, anger and disdain.

"A lot of that was through ignorance," former Indy 500 winner Mario Andretti said from his office in Nazareth, Pa. "Some of it perhaps came from male drivers that were quicker than she was but thought they weren't getting a ride while she was because she was a woman."

Bobby Unser, part of a revered racing family, told a New York Times reporter he "could take a hitch-hiker, give him a Corvette off a showroom floor, and turn him into a faster driver" than Guthrie.

A.J. Foyt, another racing legend, laughed at the recollection. "Bobby Unser's a little narrow between the eyes anyway," Foyt told the Bulletin in an interview from his racing headquarters in Waller, Texas. "He could not see things like this happening."

Longtime car builder Rolla Vollstedt signed Guthrie to drive at Indy in 1976. "I had participated at Indianapolis for over 10 years," he said from his home in Portland, Ore., "and I got this crazy idea — I don't know why — that I would like to take a woman to [race at] Indianapolis.

"I thought it would get me some sponsorships. Besides, it hadn't been done before. So I started calling my friends as to who was a capable woman driver, and the name that always came up was Janet's. I knew that if she qualified and ran in the race it would be a historic event."

Although Guthrie didn't try to qualify for the May 30, 1976, Indy 500, Howard "Humpy" Wheeler, general manager of the Charlotte Motor Speedway, saw an opportunity to promote his World 600 (now Coca-Cola 600) NASCAR race run on the same day.

He quickly helped Guthrie secure a car and engine and flew her to the track, where she qualified 27th among 40 drivers. "When she made the field," Wheeler said, "we sold more tickets the next day than we'd ever sold." She was 15th and still running at the end.

Guthrie and Vollstedt were back at Indy with a faster car in 1977. She qualified 26th.

"Janet was always very professional," Andretti said. "If anything, I thought she was probably the safest one to be around because she struck me as a very intelligent individual. She was not going to do anything stupid or foolish."

Next: Guthrie ends her racing career. >>

After just 27 of the 200 laps, a gear in Guthrie's engine broke; she finished 29th. A year later she finished ninth. But after starting 14th in 1979, a burned piston ended her race after three laps. She failed to qualify the following year.

The 1980 Daytona 500, where she finished in 11th place, was her last major race. "I didn't retire," she said. "I ran out of money. For the next three years I tried to find sponsorships and get back in the game. Finally I decided if I didn't cut it out I was going to jump through a window."

She moved to Aspen in 1985 and began writing her autobiography: Janet Guthrie, A Life at Full Throttle. She married American Airlines pilot Warren Levine in 1989. He was a charter jets pilot when he died of a heart attack in 2006.

"I was giving speeches before I stopped racing," she said. "Once in a while I still do. I like gardening. I go hiking in the summer. I lead a pretty ordinary life.

"I think I made a huge difference in how the men drivers felt about having a woman in the field. As time went on, that changed. I believe the men, with one or two exceptions, came to recognize that what I did on the track was just like what they did on the track."