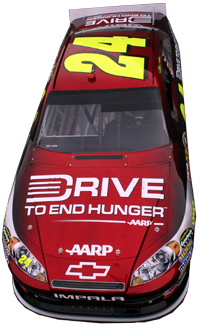 Four-time NASCAR champ Jeff Gordon unveiled the paint scheme for his Drive to End Hunger No. 24 car. Fans will recognize the black base color of Gordon's No. 24 Chevrolet Impala designs of recent years. Candy-apple red streams from the hood and across the roof and rear. A silver swoosh derived from AARP's logo branches along each side.

"I think we are really making gains," Gordon says. For a moment, it sounds as if he's talking about his Sprint Cup standings. But the much-decorated champion is addressing his decade-long engagement in social issues.

"I wouldn't be doing the work if I didn't think we were moving ahead," says Gordon, 39. "I am really excited about how far we have come."

Those gains have largely been achieved through the Jeff Gordon Foundation, his 11-year-old philanthropic operation devoted to wellness, treatment and research for kids. The foundation has awarded more than $10 million to health organizations nationwide. Jeff Gordon Children's Hospital in Concord, N.C., is the most prominent testament to his generosity.

The adrenaline junkie Gordon is jazzed by the Drive to End Hunger, the new three-year food and nutrition program of his Hendrick Motorsports team, AARP and the AARP Foundation. "It just amazes me — millions of Americans are forced to make a choice between going hungry and medicine," Gordon says. "And 6 million of those are 60 or over."

Jo Ann Jenkins, AARP Foundation president, calls Gordon "one of the most generous drivers on the NASCAR circuit. The respect he earns on and off the track makes him the perfect fit for the Drive to End Hunger. With the support of Jeff, his team and his millions of fans, we will solve the problem of hunger for older Americans."

For millions of NASCAR followers, the partnership will be conspicuous. Long familiar with corporate tie-ins that turn drivers' fire suits into logo jungles, fans will see Gordon and his Hendrick teammates wearing a compassion patch for the first time.

"We have never in the history of this sport had a sponsor that is cause-driven," Gordon says. "We have had races where we support one foundation or another, but a full sponsorship! This is the launch of a very big program." Gordon will be behind the wheel of the Drive to End Hunger No. 24 car in 22 races during the 2011 NASCAR season.

And one, he predicts, that will benefit greatly from the generosity and shared values of what he calls the NASCAR family. "We have such a loyal fan base, and they are a very giving community, no doubt about it," he says. "We are so surrounded by our fans, and we are made aware of their issues — maybe more than other athletes."

A close connectedness between spectator and spectacle has long been considered unique to NASCAR, considering the love-hate relationship other professional sports organizations often develop with their fan bases. Given the special bond, compassion fuels the thrill-seeking drama of every NASCAR crash. It may be uncomfortable for Gordon to address it, but he recognizes that the life-and-death game he plays every weekend may serve to heighten his passion for kindness.

Jeff Gordon will drive his No. 24 Chevy Impala to fight hunger. — Gerry Broome/AP 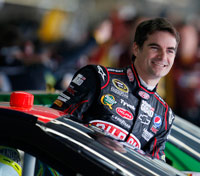 Donate to the Drive to End Hunger. Do

Help Fight Hunger With AARP Create the Good. Do

More on Hunger in America. Read

Jeff Gordon will drive his No. 24 Chevy Impala to fight hunger. — Rusty Jarrett/Getty Images for NASCAR 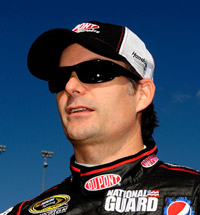 More on Hunger in America. Read

"I know of other drivers and crew members who have always given back," he says. "Is that because of the dangers that we face? I think there is a real sense of how short your life could be when you are a racecar driver. It can be dangerous. I have seen deaths and major accidents."

Gordon, whose collision with Kurt Busch on Oct. 16 in Martinsville, Va., thrust him into 20th place for the day, quickly shifts from the existential to the experiential. "I make a great living … more than I ever thought I could driving a racecar. I feel so blessed and so fortunate. I have to balance out the good with giving back."

He seems to have achieved that through empathy with the less fortunate. "I remember a kid, when I was in fourth or fifth grade, had open-heart surgery, and he came to school and showed us a big scar down his chest." That and the leukemia diagnosis of a close colleague's 1-year-old were the only real encounters with juvenile illnesses for this father of two (Ella Sofia, 3, and Leo Benjamin, 3 months old).

Gordon is quick to admit that his new commitment to the Drive to End Hunger is obviously not based on personal deprivation. In fact, it is good fortune that heightens his awareness of how crucial its mission is to others. And by promoting the program to NASCAR Nation, where three-day tailgate parties are a fixture, he hopes his well-fed fans may be also moved to action.

"They'll say, 'Wait a minute. I know Chuck or Sally has a grandmother who is dealing with this.' A lot of times you don't necessarily have to be going through it yourself to realize you could be helping."

Gordon's thoughts return to his profession, racing cars. "I know we have a shot at winning," he says.

He's talking about the Sprint Cup and an upcoming race at Talladega.


Jack Curry, a former editor at USA Today, is a freelance writer and editor and serves on the editorial board of the U.S. Chamber of Commerce, specializing in corporate philanthropy and the media.