A new report shatters the myth that older Americans largely escaped harm in the foreclosure crisis by having large amounts of equity or owning their homes outright. In fact, more than 1.5 million people age 50-plus have lost their homes since 2007 and at least 3.5 million more remain at risk at this most vulnerable stage of their lives.

Have you experienced a foreclosure? Tell us your story.

Perhaps most disturbing, homeowners age 75 and older showed the fastest rise in this kind of debt, which can crumple fixed-income retirement budgets. Likewise, they had a higher foreclosure rate (3.2 percent) than younger members of the 50-plus group, the study found.

“More older Americans are carrying mortgage debt than in the past, and the amount of that debt is also increasing … leading to their worsening situation,” said Debra Whitman, AARP executive vice president for policy. “It’s one thing if your housing value goes down in your 50s. It’s another thing if you’re 75. For some people, it’s not like you can go back to work.”

It’s not clear whether the increasing debt is because of refinancing, taking out new mortgages or grappling with rises in adjustable rate loans. However, higher living costs and fixed incomes appeared to contribute significantly to older Americans’ plight. The study found that as of December 2011:

If there was any good news for older people in the report, it was that in 2011 they had a slightly lower overall foreclosure rate, 2.9 percent, than the 3.5 percent figure of people less than 50 years old. Yet even that was conditional: The older group’s rate had grown at a faster clip than younger people’s.

The AARP analysis, using facts and figures from the data tracking firm CoreLogic and other sources, was the first to measure the effects of the foreclosure crisis and plunging property values on older homeowners. The findings exposed the deep financial vulnerability of boomers and other older adults who got caught up in the mortgage mess at a time when they had few working years, if any, left to rebuild a savings cushion for retirement. 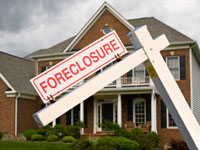 More older Americans carry mortgage debt than in the past, and that debt is increasing.

In their older years, people often tap their home equity — the biggest asset that many have — to pay for long-term care, home maintenance, medical bills and other expenses. What happens when that money no longer exists?

"You may have been working for years toward paying your mortgage, and the security you thought you’d have isn’t there," Whitman says. "Not only that, the downturn in the market meant savings fell flat. Pensions are going away. It's really this huge storm of things hitting people right now."

The recession left few people unscathed, but some groups felt the pain more than others, the study found.

Among older mortgage holders, minorities were hit the hardest. Foreclosure rates on prime mortgage loans with fixed rates reached 3.9 percent for Hispanics in 2011 and 3.5 percent for African Americans, about double the rate of 1.9 percent for white borrowers.

Have You Experienced a Foreclosure?
Share your personal story to help inform and inspire others.

Risky subprime loans, which helped to ignite the foreclosure crisis with their high interest rates and treacherous terms that were often peddled to unsuspecting borrowers, predictably fueled more foreclosures than prime mortgages.

Other findings involving subprime loans given to borrowers 50-plus:

The study recommends steps to improve housing policy, including:

Carole Fleck is a senior editor at AARP Media.