Q. I'm considering buying a home with a five-year adjustable-rate mortgage because fixed rates are going back up. Is this a good idea?

See also: 10 things you should know about reverse mortgages.

A. Adjustable-rate mortgages (ARMs) are becoming more popular again after they nearly vanished from the marketplace during the real estate meltdown. Many borrowers couldn’t afford the higher interest payments when their ARMs reset and ultimately lost their homes. But as fixed rates creep up, borrowers are turning their attention once again to these enticing loans.

ARMs typically offer lower interest rates, or teaser rates, for an initial period such as three, five or seven years. After that, the interest rate adjusts annually, based on prevailing rates. Caps limit how much the rate can increase at each adjustment. But over time, the rate can climb significantly, making your payments much harder to afford. Some ARMs can rise as much as 6 percentage points during a 30-year term.

By comparison, interest on a fixed-rate mortgage stays the same for the life of the loan, so you’ll always know how much to pay each month. If you lock in a low rate, you’re likely to be paying much less over time because ARMs tend to go up repeatedly over the course of a loan term. 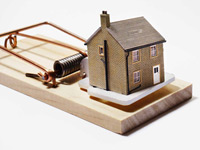 Ultimately, whether ARMs are a good deal for you depends on several factors, including how long you plan to be in the home you buy. If you intend to sell it within five years, before the adjustable rate changes, for example, an ARM may be right for you. But if the housing market in five years is anything like today’s market, you could have a very difficult time selling. And that means you’d be stuck with an ARM that resets to a higher rate and a higher monthly payment.

Before you decide, talk with your loan officer about how ARMs adjust. Be sure you understand the risks. The Federal Reserve website also offers consumers information on how ARMs work and the risks associated with them.

Carole Fleck is a senior editor of the AARP Bulletin.