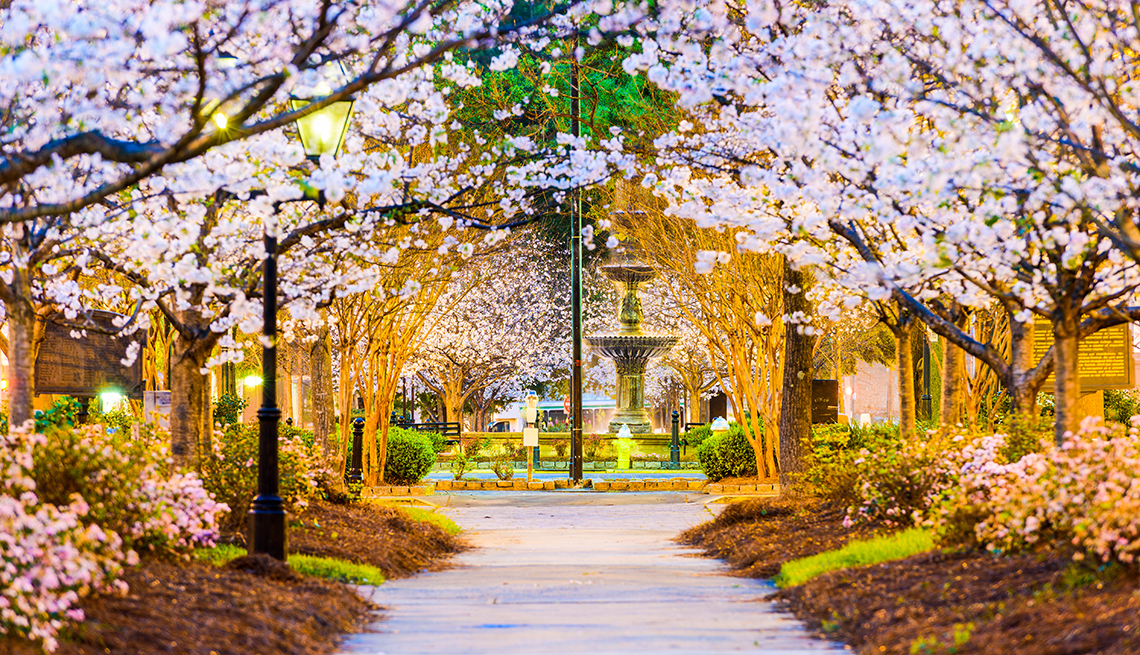 Springtime in Tattnall Square Park, Macon, Georgia, in this undated photo. Tattnall Square Park is an example of how to make a park come alive for an entire city in just three years. Hundreds of supporters and partners helped to make the park a beautiful and age- and culturally-diverse public space and display of community pride.

In 2011, the grassroots non-profit commu­nity organization Friends of Tattnall Square Park began thinking about ways to improve the park and, more specifically, how to create an engag­ing landscape that would be safe and welcoming for all users. The revitalized park now serves as a beautiful public place that’s visited and enjoyed by people of all ages.

In 2012 the Friends of Tattnall Square Park received a Knight Neighborhood Challenge Grant, which enabled the purchase of 200 new trees. At the same time, residents of the City of Macon and the County of Bibb voted to consolidate their governments in order to both save money and avoid a replication of services. The new community, called Macon-Bibb, enrolled in the AARP Network of Age-Friendly Communities.

As part of that effort, AARP Georgia and the Walkable and Livable Communities Institute assessed the walkability, livability and age-friendly features of the community surrounding the park.

The resulting report helped engage key players (including the local government) and provided recommendations for how to improve the park and the roads adjacent to it.

Among the enhancements thus far:

Other efforts involve replacing or upgrading the park’s lighting, re-installing a park fountain (the 1915 original was removed in the late 1960s), converting surfaces from asphalt to greenery and building spaces for outdoor gathering, ceremonies and performances.

In addition to inspiring thousands of hours of volunteer labor, about $2.5 million has been spent on the park so far (from 2012 to 2015). Most of the funds have come from community grants and donations.

Tattnall Square Park is an example of how to make a park come alive for an entire city in just three years. Hundreds of supporters and partners helped to make the park a beautiful and age- and culturally-diverse public space and display of community pride.

In 2014 the City Parks Alliance recognized Tattnall Square as a Frontline Park, a designation that promotes "inspiring examples of urban park experience, innovation and stewardship." Several annual events — including children's programs and the Sidewalk Chalk Festival — attract visitors to the park.

As Andrew Silver, chair of Friends of Tattnall Square Park, explains: “People of all ages can enjoy nature, without being a consumer, without purchasing anything. It’s free. Up to 1,000 people visit the park every week to enjoy the open space and trees.”

Learn how to check the "livability score" of any address in the U.S.