Sign up for The Daily newsletter covering COVID-19 and more — sent Monday through Friday. 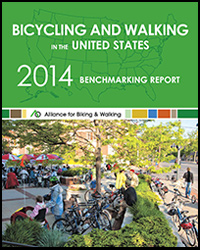 Download Bicycling and Walking in the United States: 2014 Benchmarking Report

Commissioned every other year by the Centers for Disease Control and Prevention’s Healthy Community Design Initiative, the Alliance for Biking & Walking report Bicycling and Walking in the United States is a 268 page collection and analysis of data about bicycling and walkability from all 50 states, 52 of the most populous cities and 17 midsized cities.

Benchmarking is a particularly helpful approach to active transportation issues because it allows comparison among states and cities while also measuring national trends. To gather information the Alliance compiles data from numerous national sources — including the American Public Transportation Association (APTA), the American Community Survey (ACS) and U.S. Bureau of Labor Statistics (BLS) — and conducts surveys with the help of advocates and state and local government officials. (See page 226 for a useful chart about all the data sources.)

The easy-to-use, image-filled report (which was made possible with support from AARP and the American Public Transportation Association) examines both bicycling and walking levels as well as a suite of related factors and variables, including crash fatalities, weekly physical activity, transportation costs, climate influences, gender differences and economic growth.

Says the Alliance: “The ultimate goal of the Benchmarking Project is to provide a resource for advocates and professionals who influence the accessibility and safety of bicycling and walking.” This report, the authors add, is made available in “an effort to accomplish the following primary objectives: promote data collection and availability; measure progress and evaluate results; support efforts to increase bicycling and walking.

The report is divided into sections that focus on the following results: Levels of Bicycling and Walking (page 34), Health and Safety (page 68), Economic Benefits (page 91), Policies and Funding (page 104), Infrastructure and Design (the section starts on page 148 but don’t miss the images on page 159), Connecting to Transit (page 168), Education and Encouragement (page 182), and People Powered Movement (page 200). Some highlights:

Bicycling and Walking in the United States: 2014 Benchmarking Report provides a way for cities and states to see how they measure up, set new goals, learn about successes and identify areas in need of improvement. (While the report is about the U.S., it does contain brief essays about biking and walking behaviors and successes abroad, such as in Sierra Leone, Denmark and Germany, among other locations.)

A useful resource for policy makers, pedestrians and bicyclists, the report also includes a helpful sample survey (page 230), a list of advocacy organizations and study area matches by state and city (page 234) and a worksheet for comparing your community’s data to the national highs, averages and lows (page 258). The report is so thorough it even features a list of corrections to the 2012 benchmarking report (see appendix 7, page 245).

The efforts of bike-walk advocates and supporters appear to be working. “When the first Bicycling and Walking in the U.S.: Benchmarking Report was released in 2007, only 16 states had a published goal to increase bicycling and walking mode share,” writes the Alliance. “Today, city and state leaders are competing for bicycle- and pedestrian-friendly status, prioritizing more of their transportation dollars to non-motorized transportation infrastructure.”