En español | We all look forward to summer: sultry afternoons in the backyard, long weekends in the woods, vacations at the beach.

But summer can also be fraught with dangers that do more than ruin your day. As we get older, we're more susceptible to heatstroke, not to mention the sprains and strains that come with increased activity.

The best way to enjoy summer activities with friends, kids and grandkids? Be prepared. Whether you are headed out to the beach, relaxing in the backyard or taking a trek, our four-part series of tips will help keep you safe all summer long.

Action plan: Older feet are less sensitive to heat, so you may not realize how hot the sand is until it has already done its damage — and hot sand can give you second- or third-degree burns. The risk is even greater if you're diabetic and have numbness in your feet. To avoid burns — not to mention cuts — wear surf shoes or sandals, says David Greenhalgh, M.D., chief of burn surgery at Shriners Hospitals for Children–Northern California.

Danger: Sand in your eye

Action plan: Rinse your eye with saline solution if you have it, plain water if you don't, says Jerry Sebag, an ophthalmologist in Huntington Beach, Calif. Rinse for three minutes, then apply eyedrops. Close your eyes and cover them with a cool compress for 10 minutes to reduce inflammation. Warning: Don't rub — doing so could scratch your cornea, a painful condition indeed. 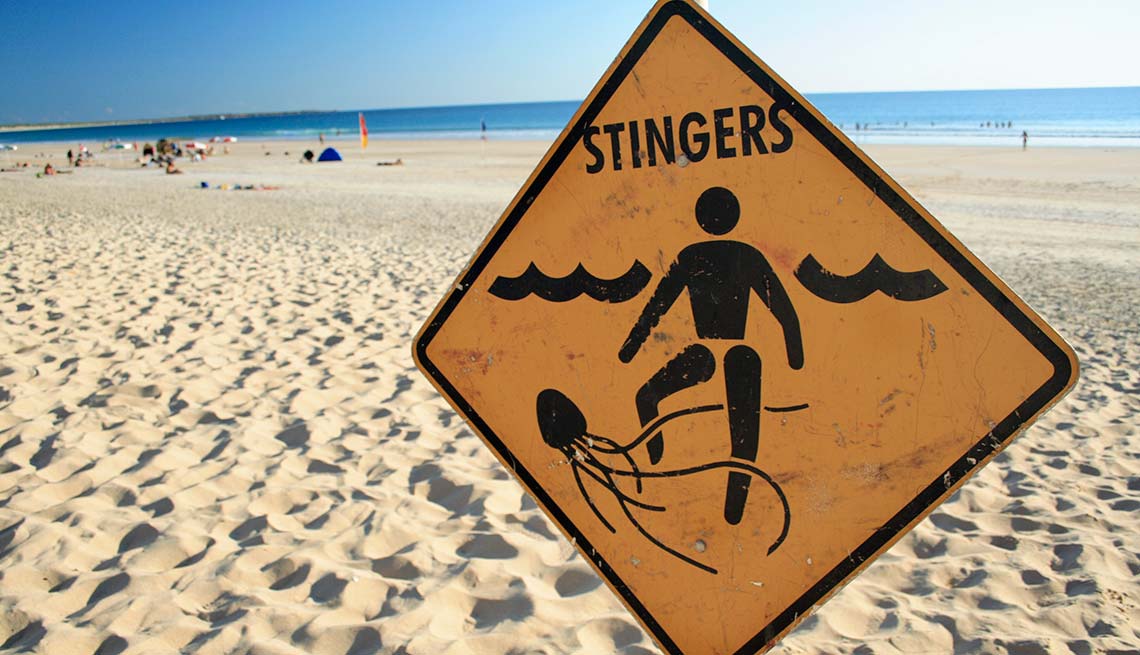 Action plan: If tentacles are sticking to the skin, rinse with salt water and scrape off barbs with a Popsicle stick or credit card. Depending on the type of jellyfish, vinegar can stop the stingers from continuing to fire, says Joseph Burnett, professor emeritus at the University of Maryland School of Medicine. Don't believe the old wives' tale that urine can relieve the pain of a jellyfish sting. It won't help.

Action plan: Rip currents do not pull you under the water or take you across the ocean. "They're just taking you for a ride," says Robert Brander, a coastal geomorphologist at the University of New South Wales in Sydney. Try not to panic. (Easier said than done, we know.) The rip may not pull you under, but if you use your energy thrashing about, you could end up in trouble. Instead, signal for help by waving one arm. To escape, swim parallel to the shore until the current releases its grip. If you're not a strong swimmer or have health concerns, scan the ocean first: Rip currents look like dark paths of calm water. Avoid them. 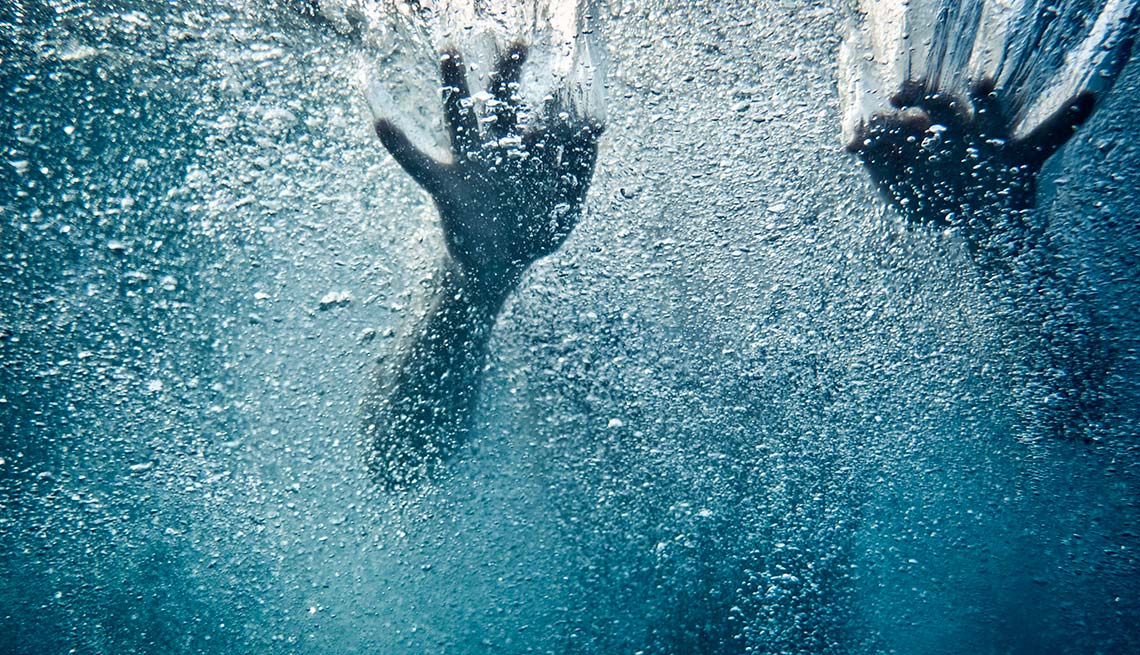 Help protect your grandkids from drowning by keeping a close eye on them at the beach.

Danger: Kid trouble — in the water

Action plan: Always keep an eye on your grandkids and their friends when they're in the water; drowning kids often don't thrash around or shout. Instead, they will press their arms down to keep their mouths above water. A child who goes under but seems OK afterward should be checked out anyway and watched the rest of the day; water in the lungs can linger long after the incident — and can drown the person even hours after the scary episode.

Action plan: Read the news and you may think sharks are climbing onto the beach and dragging people into the surf. Truth is, attacks are rare — an average of 45 a year in the U.S. To reduce your odds, swim in groups, avoid murky water, and stay on your beach towel after twilight. If you are attacked, punch the shark in his tender spots — his nose and gills.

Danger: A splinter in your thumb

Action plan: First, cut a square from a banana peel and put it white-side down on the splinter. Then cover it with a bandage. The enzymes in the peel will draw out the splinter.

No banana? Spread Elmer's glue on the splinter, let it dry, and peel it off. 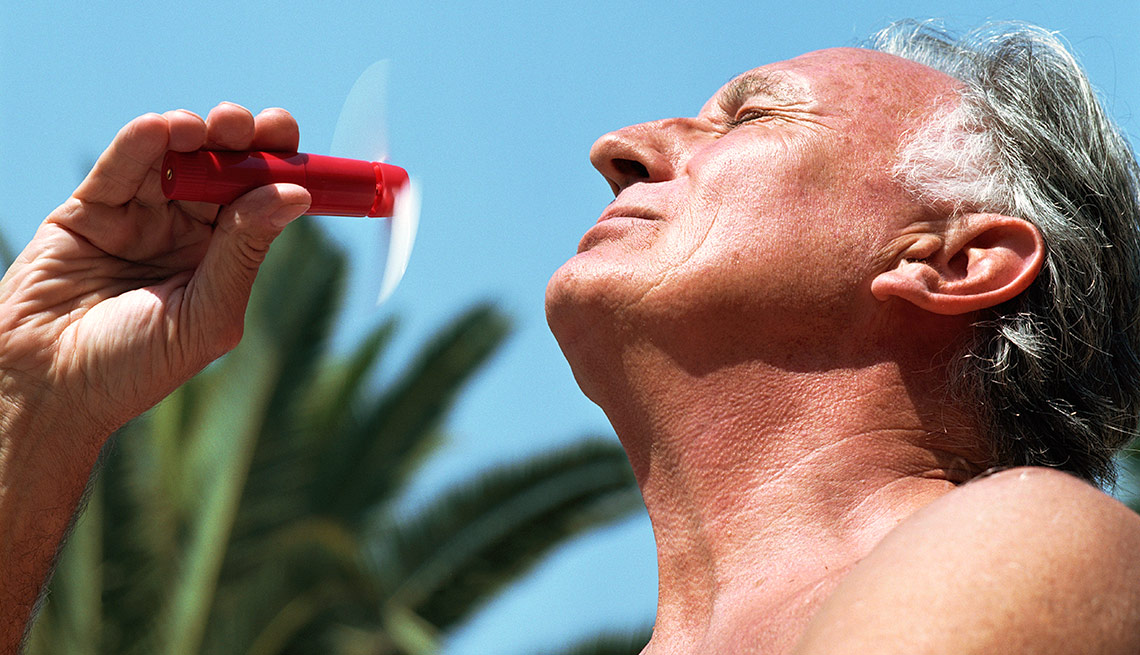 Feeling light-headed? You may be getting heat stroke.

Action plan: Your internal cooling system doesn't work as well as you age, so if you're feeling dizzy or light-headed and your skin is clammy, those are sure signs you're becoming overheated. Immediately find shade and elevate your feet, then rehydrate with cool water. (Avoid ice water, which is not as easily absorbed.) Pouring cool water on your wrists and feet can also help lower your body temp more quickly.

Action plan: When a queasy tummy strikes, lie down, be still, and stare at the horizon line. An empty stomach can make you feel sicker, so sipping water and eating some saltines — an old sailor's trick — can help, says Thomas Stoffregen, professor of kinesiology at the University of Minnesota. If you have inner-ear or balance issues, you may want to avoid fishing trips.

Action plan: Don't waste precious minutes looking. Instead, go straight to the lifeguard on duty and give a description that can be relayed to other lifeguards. "If you last saw the child digging in the sand with his pail, he's probably still on the beach somewhere," says B. Chris Brewster, president of the United States Lifesaving Association, who in 22 years as a lifeguard does not recall a case of drowning when the child was last seen on the beach. Still, always designate one adult in your party to be a "water watcher." Brewster advises telling children that "lifeguards are like police officers. If you need something, if you get lost, they will help you."

Next: In Your Backyard