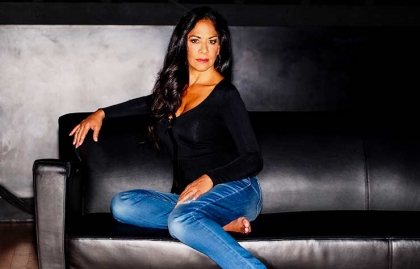 It's hard to believe that percussionist Sheila E. is 57. Within the last year, she released her seventh album, had her autobiography published and is currently on a worldwide tour promoting both projects, all while prepping for what's next on her career plate.

How does she do it? Taking a break from her tour, the California native told us that having a regular health and fitness routine plays a part. It certainly helps that she's been in the music industry most of her life.

Born Sheila Escovedo, daughter of legendary Latin jazz percussionist Peter Escovedo, she was groomed for a life in music starting at age 5. By her early 20s, she'd already shared stages with such heavyweights as Stevie Wonder and Marvin Gaye, collecting the kind of music credits most new artists only dream of.

Technically, her first album was with her father, 1977's Solo Two. But it was 1984's Grammy-nominated hit song (and album), "Glamorous Life," written by pop icon Prince, that made her a household name to R&B and percussion fans around the world. She was — and remains — a beast on the drums but has also proven to be a gifted singer, songwriter and musical director. In the spring of 2014, she released the album Icon, and shortly afterward published her autobiography, The Beat of My Own Drum.

She slowed down for a moment to share some of her stamina-boosting health tips with us.

Between touring and appearances, how do you slip in exercise with your busy schedule?

I meet with my trainer as much as possible, but honestly, my schedule doesn't leave as much time as I would like. I try to fit in two or three days during the week, and I make sure to keep to as much of my workout routine as I can, even when I'm on the road.

I don't like the gym much. I'd rather exercise outside. It's more fun. I start with a short stretch and relaxation routine. It's important to get my body, and my mind, in a good, relaxed state before I head into more of the pulse-raising parts of my workout. After that, I like to run with wrist and ankle weights. Then, I finish up with push-ups, strength training and core moves.

What kind of music gets you motivated?

My trainer brings a boom box to the park, and we pick different music every day. But if I want to push myself, it's definitely salsa or dance music. I like spa or slow music for core [work] and stretching.

It must be tough to eat well on the road. What kinds of things do you try to eat — or try to avoid?

I love starting my day with a good breakfast. It's often a protein or green drink made with eggs or veggies. I try to eat five to six small meals during the day. I'm cutting back on bread, sweets and coffee drinks. I'm eating more greens, either blended in my drinks or steamed, and fish and fruits.

What is your favorite food indulgence?

Ooh, a glass of red wine with chocolate.

How have you embraced your 50s? You look like you're enjoying every moment.

Yes, but it's not easy. I have to work smarter, not harder. I believe it's important, no matter what your age, to direct your energy in a focused, positive way. Many times we can overwork ourselves and spend so much of our time, energy and efforts carelessly, that we just end up tired. By really sitting down with our decisions and making informed choices, we can save ourselves a lot of needless work and stress.