En español |The world's longest-running TV variety show is calling it a wrap. After more than 53 years, 30 of them in the United States, and more than 2,800 episodes of Sábado Gigante (Gigantic Saturday in English), host Don Francisco will bid farewell to millions of viewers Sept. 19. The Chilean's 74-year-old offstage self, Mario Kreutzberger, talked to AARP En Espanol about guests on the show, his long-postponed hobbies and what's next for him.

Did you ever imagine that this show, launched from a garage at the Universidad Católica in Chile, would end up being the longest-running program on TV?

Never in my life did I imagine that. But my desire to get ahead never wavered. I never woke up angry, never upset that I had to go to work. Even today, I'm always happy heading to tape Sábado Gigante's next show. I think we've created a program that speaks highly of our community.

Of current Hispanic television hosts, who do you think has what it takes to become the next Don Francisco?

It would be unfair to name anyone, because there's never going to be a new Don Francisco or a new Johnny Carson or a new David Letterman. Everyone is an individual, with individual abilities that they develop. No two people are identical.

Your show launched artists such as Enrique Iglesias, Ricky Martin, Selena, Chayanne, Gloria Trevi and Jenni Rivera. Do you remember some more than others?

Yes, several. When Shakira first appeared, [I remember] a young woman with a very distinctive personality, her hair, even her figure was distinctive. I also remember Enrique Iglesias' nerves the first time he was on. I remember Juanes' debut. I remember so many more I could name.

Does any less well-known figure stand out?

Let me tell you about an interview that probably didn't mean much to most viewers, but it did to me. Thirty-three years ago, it showed me the path I was meant to follow, a new path in the United States. I interviewed a young man who I was going to reunite with his mother after 28 years. She had abandoned him when he was 1. The problem was that he only spoke English and she only spoke Spanish. I brought them together and they hugged, but I was most moved by the one word he kept saying to her and that she didn't understand: "Why? Why?" That's the moment I became aware of my calling: To unite a community through language and to bring up issues in this community that I wasn't even aware existed. 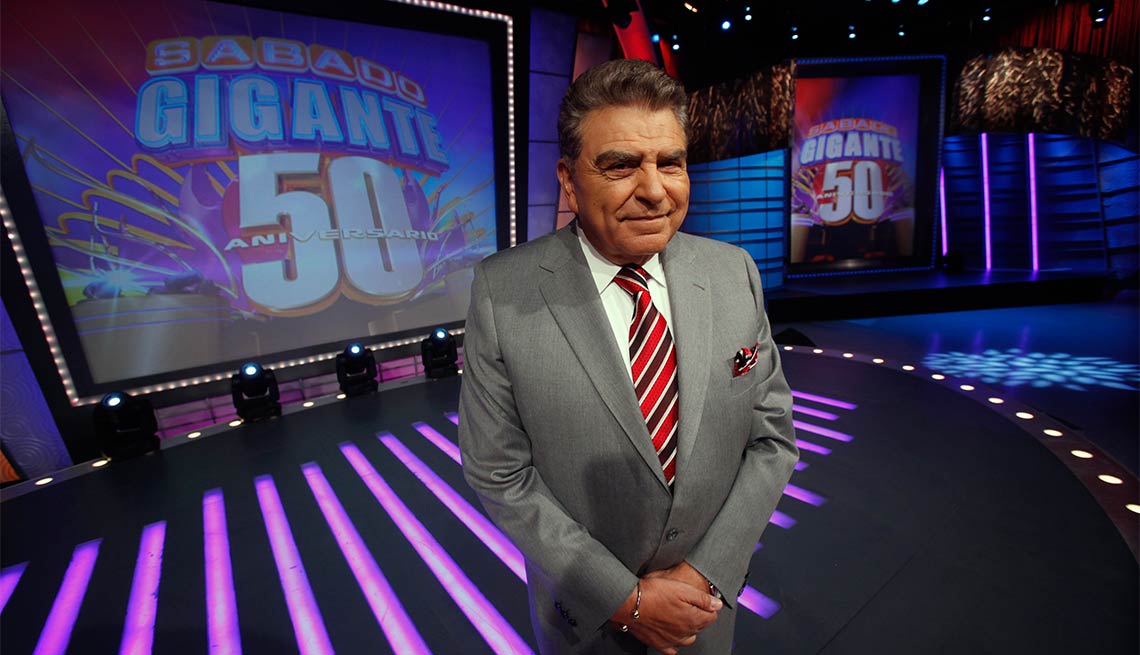 Don Francisco, host of the variety show "Sabado Gigante," poses on the set of his show in Miami

What major figure have you been unable to interview?

I have unfinished business, but I will do whatever it takes to make it happen: I want to interview Pope Francis. That has been one of my major goals and I hope I will achieve it.

You never enter and leave through the same door, you always carry a sliver of wood in your wedding ring, and there are colors that you will never wear. Why are you so superstitious?

Honestly, I don't know how I became so superstitious. There's a fine line between success and failure in front of an audience. Often you think a little piece of wood, a color or entering from a specific side produced some success. You tell yourself, "I want to keep having this success." Maybe you come in through the other side and the success isn't as big. You never admit that you might have failed for other reasons. It's difficult to explain failure to yourself.

You've said that your biggest professional achievement has been the Teletón, the fundraiser for disabled children that now takes place in 14 countries. How does it feel to have helped so many people?

It gives me, and all of us who have worked to provide an opportunity for rehabilitation, great satisfaction. The Teletón gave me a way to climb out of my depression. [Until then], I felt like I hadn't given back to the audience what they had given to me.

Where does Don Francisco end and Mario Kreutzberger begin?

What is the first thing you plan to do on Sept. 19, after you turn off the studio lights?

I've actually asked myself that many times. I have no idea what I'm going to do when that light goes out. I don't know if I'll be able to turn on many other lights. To stop working would be like losing my soul, and I don't plan to do that.

Do you have any hobbies?

I used to fish as a hobby, and I'll probably go back to it. I'd given it up because I didn't have time for it. [So], mainly that and traveling. I don't have a boat right now, but I might get a small one. I really like sailing, but also going on road trips in the U.S., in Latin America, anywhere.

What are your dreams for the next 10 years?

I've had a big dream for the last 15 years that I've never been able to accomplish. I've always thought that television and all media are directed mostly to audiences between the ages of 18 and 34, or 18 and 49. Today, people live longer, much longer. And I've thought about developing some type of programming, supported by all the digital media that exist, on a channel directed to people 50 and older. I haven't achieved it yet, but you can never let yourself give up. Maybe this is my opportunity.