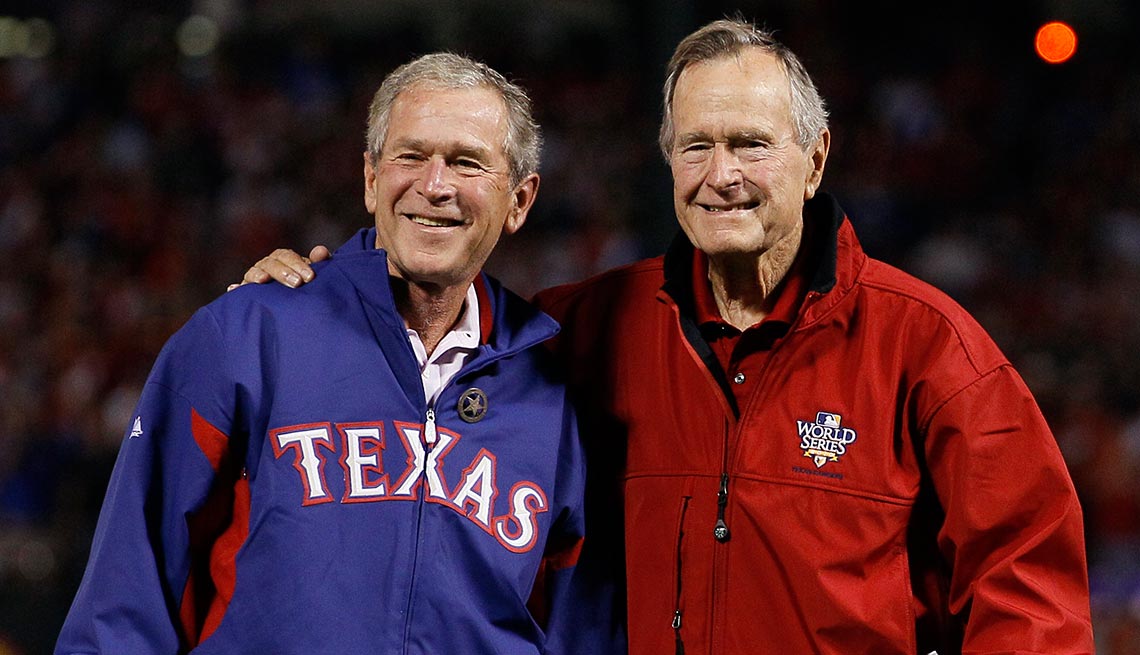 Among the lessons George W. learned from his father, George H.W. Bush: Life is to be lived to the fullest.

En español | The former president talks about his new book, 41: A Portrait of My Father, and the lessons he learned from George H.W. Bush, the 41st president.

Q: Congratulations on your new book. How is your father doing?

A: He is aging joyfully. He is of sharp mind and sharp wit. Physically, he is not where he would like to be because he's confined to a wheelchair, but he is a content man.

Q: The book opens with the scene of your father skydiving on his 90th birthday last May.

A: I wanted people to grasp a sense of this man's character early on. He was nearly dead, and then he jumps out of an airplane at age 90. He said he would do so, and he did.

Q: You compare your father's parachuting after he left office with you taking up painting.

A: There is no comparison between the physical nature of jumping out of an airplane and painting, but Dad's example reminded me there is much to be seen and done, particularly after you've ended one chapter of your life.

Q: What are the most important lessons you've learned from your father?

A: That unconditional love is liberating. That life is to be lived to the fullest. That defeat does not prevent victory.

Q: While president, you didn't often seek your father's advice.

A: Well, first of all, the best balm to the job is love, to hear his voice say, "Son, I love you. I know what you're going through. Hang in there. You're doing a fine job." Secondly, he would have said, "Send your briefers to Houston or Maine; I will get up to speed on the issue, and then I'll give you advice."

Q: In the book, you describe a poignant moment visiting him in the hospital with Laura and your daughters when he was near death with pneumonia.

A: I told the girls we were going to stop by, but I don't want Dad to see us weeping. We weep a lot in our family. And so we go in the ICU and Jenna and Barbara are rubbing his head, and he leans over and rubs Jenna's stomach and says something along the lines of, "There is death and then there is the beauty of life."

And Jenna was pregnant at the time, noticeably pregnant, and we wept. It was a very sweet moment, but it also basically said this could be the last time we see him.

Q: Coping with death and learning from setbacks are recurring themes in the book.

A: You're going to have setbacks. The question is, how do they affect you? In Dad's case, it seemed to me that they made him stronger, more sympathetic, kinder. I find it incredibly insightful that after the '92 election, which stunned Dad a lot, he became very close to the man who beat him. He was gracious and willing to reach out to Bill Clinton. It's an inspiring example of humility.

Q: You didn't expect them to become as close as they did.

A: No, I really didn't. George H.W. Bush has been underestimated a lot, and I underestimated him. And Bill Clinton, by the way, was very gracious to Dad.

Q: Your dad once set you up on a blind date with Tricia Nixon. I gather it didn't go too well.

A: I'm sure from her perspective, it didn't go very well. I drove up to the White House in a purple Gremlin with Levi-jean seats.

Q: You had it all going back then, didn't you?

A: Yeah, boy, I was a dude and coming out of pilot training. I was a pretty heavy drinker in those days. We went over to the Alibi Club, and I still remember knocking over a glass and the stain of red wine creeping across the oak table. I fired up a cigarette and she said, "I'd rather you not smoke." And shortly thereafter she said, "Take me home," and I did. When I went back to the party, one of Dad's buddies leaned in and said, "Did you get any?" Not even close!

Q: "41" is a nickname you've given your father. Do you think John Quincy Adams referred to his father as "2"?