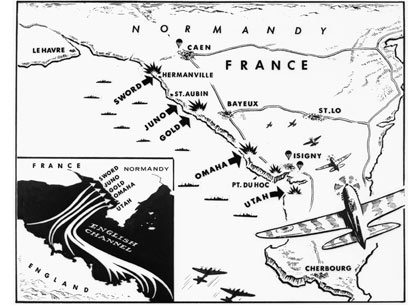 An assortment of travel companies offer World War II-oriented guided tours of the Normandy coast, site of the Allied invasion on D-Day — June 6, 1944.

But if you're up to renting a car and heading out on your own (the French drive on the same side of the road as we do, just faster), you can pass on the tour bus option and explore the French countryside and coastline at your own pace.

The Land and History

The Normandy region features rugged English Channel beaches beneath towering cliffs, expansive stretches of farmland dotted with small villages, and the remains of both medieval and 20th-century warfare.

Although the distance from Paris or Charles de Gaulle airport is suitable for a long day trip (the drive takes about three hours each way), you should spend at least a night or two at one of the area's many historic inns and small hotels.

From Paris, you approach the Normandy coastline from the east through the city of Caen or town of Bayeux. They lie just south of the 50-mile stretch of D-Day landing sites that Allied forces dubbed — from east to west — Sword, Juno, Gold, Omaha and Utah beaches. (Note: On the map above, north is at the bottom.)

By the spring of 1944, Nazi Germany had controlled France and its northern coast for four years. As supreme commander of the Allied Expeditionary Force, U.S. Gen. Dwight D. Eisenhower planned and supervised the invasion, called Operation Overlord. British and Canadian airborne and infantry forces were responsible for the eastern portion of the invasion, hitting Sword (British), Juno (Canadian) and Gold (British) beaches. American forces handled the western half of the assault, covering the region running from Bayeux to Carentan.

Most American visitors gravitate toward Omaha and Utah beaches, behind which paratroopers from the 82nd and 101st Airborne landed in support of the seaborne assaults by U.S. infantry divisions. Omaha, considered the bloodiest of the invasion beaches with more than 2,000 casualties, was a fearsome place to come ashore; the Germans had fortified the beach with barricades and obstacles to ward off invaders, and high cliffs provided a perch for them to fire down upon arriving Allied forces.

Things to See and Places to Go

Caen: An 11th-century city that was almost entirely destroyed during the war, Caen is home to a visitor center and museum, the Caen War Memorial, which is used by many as a starting point for touring the Normandy beaches. The Pegasus Bridge across the Caen Canal, in nearby Ranville-Benouville, was the first bridge to be liberated by the Allies after the invasion. (The original bridge is on display at the Pegasus Memorial Museum.)

Bayeux: The first town liberated by the Allies, Bayeux Medieval Downtown, attracts tourists with its shops, restaurants, hotels and famous Bayeux Tapestry, a 230-foot-long wall hanging that depicts the history of William the Conqueror's Norman invasion of England in 1066.

Arromanches: At the center of the invasion beaches, this British-run area housed the "Mulberry B," the huge artificial harbor the Allies brought from England to offload men, vehicles and cargo onto the beaches. Ruins of the harbor can be seen today and a museum display explains how the structure was built, transported and operated.

Omaha Beach/St. Laurent: The 172-acre American Military Cemetery in Colleville-Sur-Mere sits on a bluff high above Omaha Beach and contains more than 9,000 graves marked by white crosses and stars of David. The cemetery and its informative visitor displays are somber, worshipful memorials set against spectacular water views. The Normandy region contains nearly 30 cemeteries that hold the remains of some 100,000 American, British, Canadian, French, Polish and German soldiers.

Pointe du Hoc: U.S. Rangers scaled this strategically located, 100-foot-high cliff on D-Day to capture a German stronghold on a promontory near Grandcamp-Masey. The Pointe du Hoc Ranger Monument (currently under construction) and the ruins of bomb craters and German bunkers are present on the site.

Utah Beach: Paratroopers landing in and near the villages surrounding Carentan and Sainte-Marie-Du-Mont helped protect the arriving forces on Utah Beach. Now home to the U.S. Navy Monument at Normandy. Prior to the statue's dedication in 2008, U.S. sailors were the only service among the Allied forces without a D-Day beach memorial.

Sainte-Mère-Église: The Airborne Museum tells how U.S. paratroopers from the 82nd and 101st airborne divisions landed in this town and secured the western flank of the invasion. The roof of the town's church features a replica of paratrooper John Steele, who became entangled in its spires during the battle (yet survived).

Melissa Stanton is an editor at AARP.org.