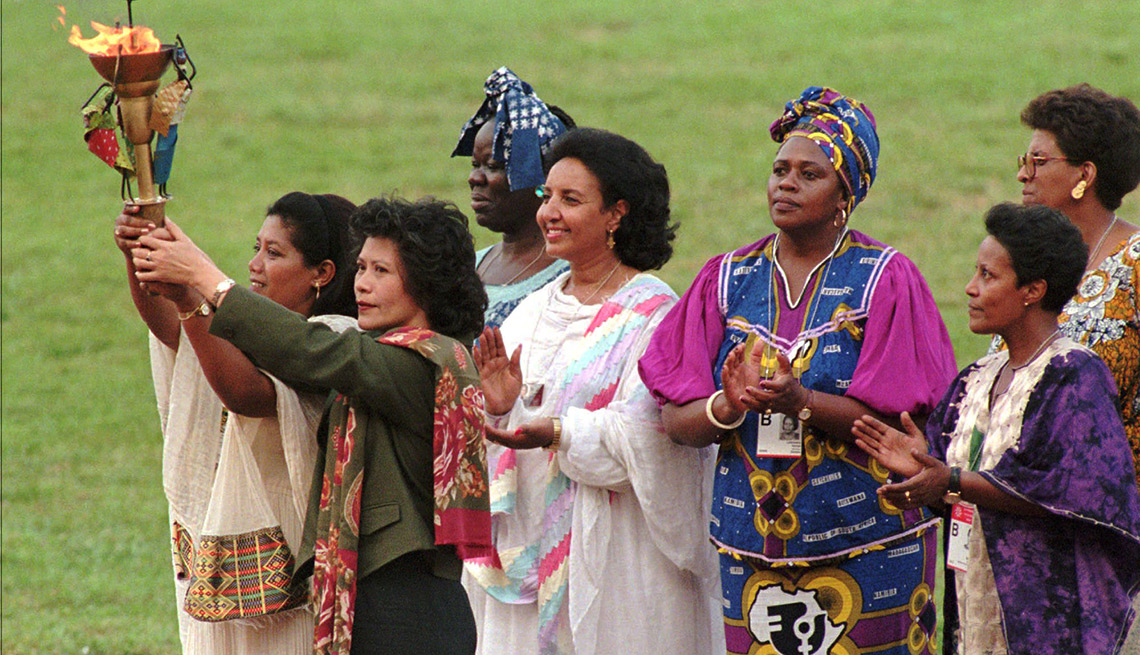 Women representing the different cultures of the world hold the "peace torch" during the opening ceremony for the U.N. Fourth World Conference on Women in Beijing in 1995.

En español | It was exhilarating. It was exhausting. It was glorious. It was grueling. I am recalling the U.N. Fourth World Conference on Women held 20 years ago this September in Beijing. It was the largest conference the U.N. had ever organized, attended by 17,000 delegates.

The World Conference was supplemented by a parallel NGO Forum on Women in Huairou, a small town 35 miles northeast of Beijing that hosted over 30,000 attendees. The forum's carnival-like tent city was at the end of a long and usually dusty road that had turned to mud, since it rained almost non-stop during the days of the meetings. In Chinese culture the feminine spirit is associated with water. It is usually very dry in Beijing in September. According to the Chinese, the constant rain was due to the feminine energy emanating from the more than 40,000 women who were there.

I was an American delegate to the U.N. Conference, one of some 70 soggy women, usually wrapped in plastic ponchos, who attended the official meeting and breakaway sessions. China was the only nation that had bid on the opportunity to host the conference, perhaps to polish its international image after the suppression of protests in Tiananmen Square. They seemed unprepared for the hordes of opinionated women — and a few men — that arrived. They were especially perplexed and irritated by the very vocal anti-Chinese Tibetan activists.

Being with very different women from 189 countries was fascinating. Madeleine Kunin, then assistant secretary of Education, says, "Visually it was extraordinary — the colors, the attire, the women's faces. There were women who were totally veiled so that you could only see their eyes. But they were there."

Veronica Biggins, a member of the delegation's leadership, remembers, "Sitting and talking to women and hearing how they got to China was fascinating. … I remember being with a group of women from Africa talking about female circumcision and about girls being married when they are age 6 or 7. You realize things that you take for granted a huge percentage of women in the world never have."

Still, Marjorie Margolies, the deputy chair of the delegation, explains, "I think we accomplished a lot in breakaway sessions, especially about violence against women. I remember in one session a woman talked about how in her village there was a man who beat his wife every night. All the other women in the village surrounded his hut and said to him, 'give her a break, beat one of us.' It shamed him. It was a starting point."

For many the high point of the whole event was first lady Hillary Clinton's speech. Melanne Verveer, who was Clinton's chief of staff, recalls, "We were backstage to the right of the podium, and as we listened we began to hear how her words were having an astounding impact on the men and women in the audience, especially during her renditions of the abuses that women experience, like domestic violence, rape, trafficking of women and children, and girls not being educated and not being valued."

How much was really accomplished? Linda Tarr-Whelan, who became the U.S. representative to the Commission on the Status of Women, feels that it was extremely significant that there was an acknowledgment that women are important to a nation's economy and future. The Beijing Platform for Action, signed by all 189 countries, created benchmarks for achieving women's empowerment and advancement. Donna Shalala, then secretary of Health and Human Services and now CEO of the Clinton Foundation, agrees that much of significance has happened because of the conference. Primary education for girls is now almost universal, and there have been considerable improvements in maternal health care. Most national constitutions written since 1995 now guarantee gender equality.

I know I left the conference feeling sisterhood was powerful among women from many nations, but I also felt very lucky to be an American. My most sustaining memory is a very personal one. Each delegate had the chance to be the official representative of the United States during one session of the conference. I remember sitting between the representative of the United Kingdom, an aristocrat, Lady something or other, and the representative from Uruguay, the wife of a government official. And there I was, the granddaughter of very poor Hungarian immigrants. I know how amazed my grandparents would have been. I know how proud my mother, who was born in England, and my father, who went to work when he was only 13, would have been. Yes, I was representing the United States at a world conference through my own accomplishments, and that was true for every woman on our delegation. And all I could think was, only in America!

Myrna Blyth is the editorial director for AARP.