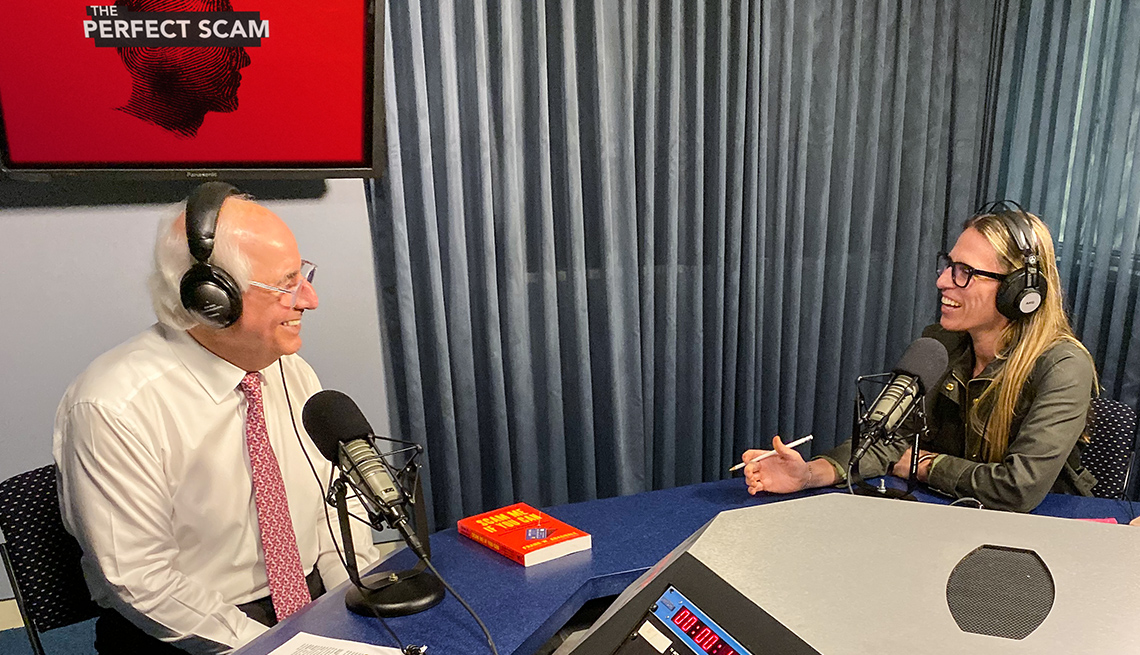 Frank Abagnale, left, and Julie Getz will bring you the latest information on fraud with expert interviews and an insiders look at popular scams.

Julie’s career in media has taken her from a busy newsroom in Washington, D.C., to following scientists on expedition in Africa to directing a feature film about an L.A.-based comic.

Julie is director of development at AARP Studios, producing original content for television, film, podcasts and the organization’s digital platforms. She was instrumental in the creation of the podcast The Perfect Scam and has worked on the show as executive producer since its inception.

She traces her love of storytelling and interest in crime to a childhood of watching Murder She Wrote with her mother in the family kitchen.

Frank W. Abagnale is one of the world's most respected authorities on forgery, embezzlement and secure documents. For over 40 years he has worked with, advised and consulted with hundreds of financial institutions, corporations and government agencies around the world.

Mr. Abagnale's rare blend of knowledge and expertise began more than 45 years ago when he was known as one of the world's most famous confidence men. This was depicted most graphically in his best-selling book, Catch Me If You Can, a film of which was also made, directed by Steven Spielberg with Leonardo DiCaprio and Tom Hanks. A Broadway musical of the same title was also created and in April 2011 opened on Broadway and won a Tony Award.

Apprehended by the French police when he was 21 years old, he served time in the French, Swedish and U. S. prison systems. After five years he was released on the condition that he would help the federal government, without remuneration, by teaching and assisting federal law enforcement agencies.

Mr. Abagnale has now been associated with the FBI for over four decades. More than 14,000 financial institutions, corporations and law enforcement agencies use his fraud prevention programs. In 1998 he was selected as a distinguished member of "Pinnacle 400" by CNN Financial News - a select group of 400 people chosen on the basis of great accomplishment and success in their fields. In 2004 Mr. Abagnale was selected as the spokesperson for the National Association of Insurance Commissioners (NAIC) and the National Cyber Security Alliance (NCSA). He has also written numerous articles and books including The Art of the Steal, The Real U Guide to Identity Theft, Stealing Your Life and his latest book Scam Me if You Can.

Editor's note: This article was updated on November 13, 2019, to reflect a new co-host for the podcast series, Julie Getz.

Are you new to podcasts? Learn how to subscribe to AARP Podcasts on any device.

Join the Fraud Watch Network for free and learn how to shop and bank safely, create strong passwords, protect yourself from identity theft and scams, use social media risk-free, and more.