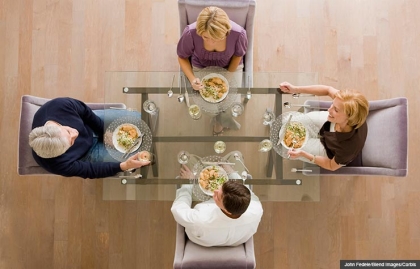 "Death Dinners" are getting adults talking about end-of-life decisions in a relaxed atmosphere.

En español | So you've gotten an invitation to a dinner party. Should you bring a hearty California cabernet, a decadent dessert or a fresh copy of your living will, complete with step-by-step instructions?

In an odd trend, boomers are hosting so-called death dinners to talk with friends and relatives about the issues no one wants to talk about — death, dying and end-of-life decisions. The objective is to head off family conflicts over medical care and to share concerns about quality-of-life issues.

Among the conversation starters: Would you want a feeding tube or ventilator to keep you alive if you slipped into a permanent coma? Is palliative care an option? When is it time to call it quits?

And can you pass the potatoes, please?

"Increasingly, we've heard of efforts just like this. Conversations are happening nationwide through a variety of channels," says Ashley Carson Cottingham, director of policy and advocacy for the nonprofit Compassion & Choices, a Washington, D.C.-based consumer advocacy group.

"Boomers who are a part of the caregiving for their parents are identifying situations that they don't want at their end of life," she says. "They constitute a powerful wave of change that will make their end-of-life situation different and better."

Carole Fisher, 55, of Las Vegas, hosted one such dinner party. She invited 17 relatives and friends, passed around adhesive mustaches, and initiated the discussion of dying as everyone munched on pizza with a furry upper lip. "It lightened the mood," says Fisher, who's no stranger to these issues. She's president and CEO of Nathan Adelson Hospice in Nevada. And even she found the table talk awkward at times.

"Our society doesn't like to talk about death," she says. "But someone has to take a risk and start the conversation."

A growing number of online resources have popped up to get adults talking in a relaxed atmosphere centered on an inviting meal. One site, Death Over Dinner, offers directions on how to moderate these dinners and suggests conversational prompts to get the discussions flowing. They even provide language to use for dinner invitations.

The Death Cafe website helps people organize and set up gatherings at coffee shops throughout the United States. The website says the "social movement" is popular in other countries as well.

Perhaps more than any other generation, boomers have a particular aversion to growing older. The generation that fueled the sexual revolution has also transformed just about every stage of life, including reinventing retirement. Now, as boomers watch their parents, and in some cases their friends, pass away, they're turning their attention to redefining death.

"We want our dying experience to be personalized rather than rote," says Lynne Lancaster, coauthor of the book When Generations Collide. "Boomers want to feel like we're deciding these things. Before, doctors told us what to do and that's what we did. Now it's much more about discussion, options and choices."

Some of us may not want life-extending procedures if our quality of life is poor. Whatever the decision, experts say to put it in writing so that family members and medical personnel know how to respond in an emergency or end-of-life situation if we are unable to communicate.

Among the ways to make your preferences known:

Prepare a living will (also called an advance directive) to document your medical treatment preferences in certain situations. It typically includes whether you'd want a ventilator, feeding tube, resuscitation — interventions that could prolong your life — if you were not expected to return to a functional state.

Create a health care power of attorney (or health care proxy, as it's also known), so the advocate you appointed can make sure your treatment preferences are carried out. It's a supplemental document to a living will, to some extent, because it gives your medical provider a designated advocate to consult if your wishes are hard to interpret in your living will, for example.

Copies of each of these documents should be given to your health care providers. Otherwise, medical personnel don't always know about your wishes, or worse, ignore them, Cottingham says.

"People want to experience a peaceful death, generally at home surrounded by loved ones," she says. "Instead, we see more people dying in the [intensive care unit], the exact opposite of what they want. We need to do a better job in getting people to document their wishes ... and to make sure medical providers are adhering to those documents."

A FindLaw.com survey released in February found that only 1 in 3 adults had a living will. In 2007, a Harris Interactive study said 2 in 5 adults had advance directives. It was no better among severely or terminally ill patients: The majority had no advance directives in their medical records, researchers for the federal Agency for Healthcare Research and Quality reported a few years ago.

With Thanksgiving approaching, experts say it's an ideal time to gather around the dinner table with friends and family to discuss these issues.

"Making a living will at the bedside of someone who's in a crisis situation is probably the least appropriate but most frequent time when people start talking about end-of-life care," says Sally Hurme, a project adviser at AARP and author of The ABA Checklist for Family Heirs: A Guide to Family History, Financial Plans and Final Wishes. "The conversation has to happen long before there's a health care crisis."

"If you died in your 50s, can your spouse afford to keep the house with the mortgage you have? If you can't, do you take out insurance or plan on downsizing now? What about the kids' or grandkids' education? If there's only one income stream, one set of assets, these are things you really need to think seriously about," she says.

Fulton also recommends designating a place to store your will, bank account information, investment statements and other documents so that your spouse or heirs have easy access when the time comes.

"You want the process to go as smoothly as possible," she says.

The same holds true for a living will. Fisher, as the head of a hospice, says she witnesses all too often the fallout when family members don't have their end-of-life decisions spelled out.

"I see families at odds with each other because they haven't had these conversations," Fisher says, "and Mom's not able to communicate. They're arguing about treatment versus hospice when they should be focusing on their grief."