The Swampscott Senior Center on Boston's North Shore was ailing. Housed in an old Victorian house, the center had three flights of stairs and limited on-street parking. The only handicap accessible area was in the windowless basement, where the staff served lunch and offered bingo and exercise class twice a week.

Sometimes, only two people would show up for a meal. The senior center wanted to relocate, but municipal funds and land within Swampscott's 3.05 square miles were limited. A new, stand-alone senior center was not in the cards. Meanwhile, the town's public schools were overcrowded. A new high school was needed. 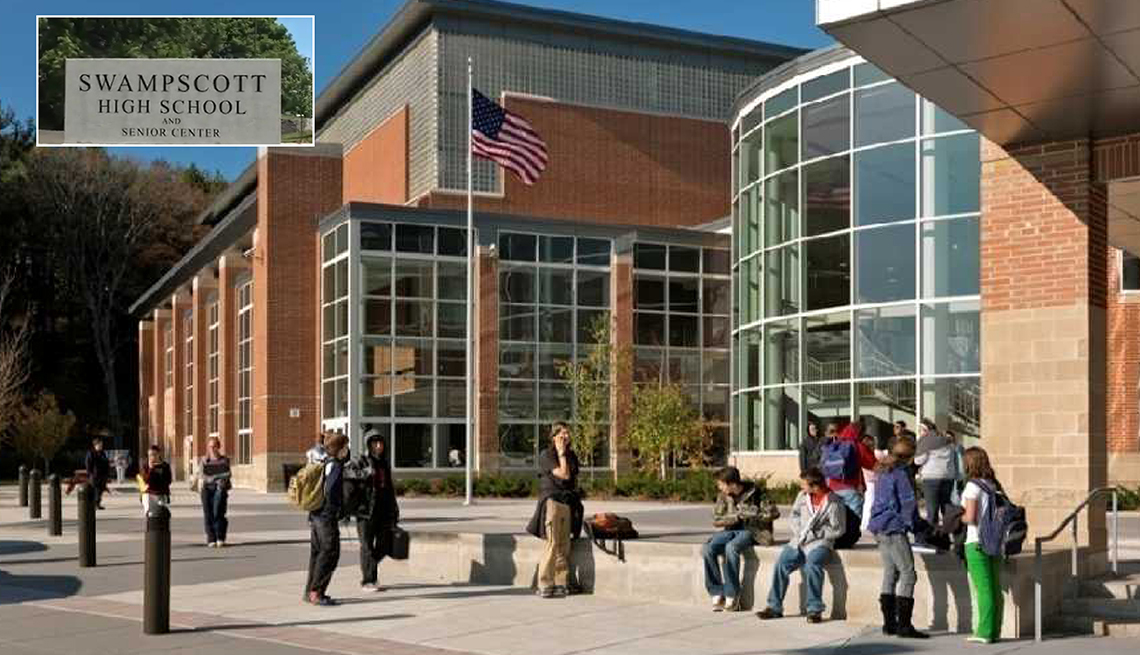 The exterior of Swampscott High School and (inset) the shared entrance sign.

Fast forward to today: Swampscott, Massachusetts — population 14,000 — now has both the senior center and the high school it long needed. In fact, the two facilities share a plot of land and are essentially one, with the ground-level senior center occupying a 7,500-square-foot space that's attached to the high school. Here's how it happened.

WHY: In Swampscott, the number of older adults is about equal to the number of homes with school-age children. Rather than compete for town funds, the high school and the senior center joined forces.

WHEN: A school building committee, made up of nine residents, was formed in 2003 and tasked with making decisions and overseeing the high school's design and construction. The committee and Philip Poinelli, the school's lead school architect from Symmes Maini & McKee Associates, approached the local Swampscott Council on Aging to see if they'd be interested in relocating the senior center to the school building. The representatives said yes. Students and the senior center moved in with the opening of the 2007 school year.

WHERE and HOW: Two proposals went out for bid: one to build a high school only, and the other for a combined high school/senior center. The town-owned property to be used had a park, baseball fields, a hockey rink and a forested area. The completed project retained some parkland and a forested area, upgraded a playground and added a soccer field and running track. 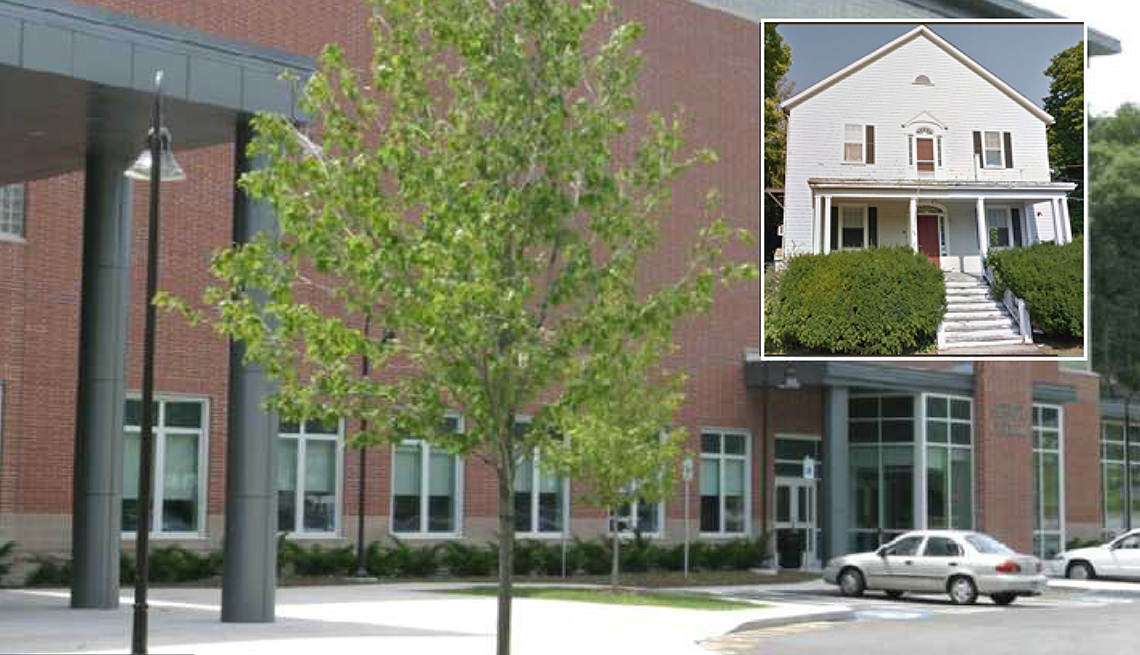 The Swampscott Senior Center at Swampscott High School. Until 2002, the senior center was located in an old Victorian house (inset).

THE APPROVAL PROCESS: The Massachusetts state legislature had to vote to allow the town to build on parkland and replace it by creating a park elsewhere in town. The local government had to vote on the project, and residents needed to pass a proposition to raise taxes to help finance the effort. The combined project required special zoning permits from the town. Neighbors, concerned about traffic and fearing a decline in property values, challenged the granted permits in state court. The building committee and architect held monthly, often contentious, public meetings with neighbors during the lawsuit. Mediation led to an agreement, which included adding a new playground to the high school/senior center property.

THE COSTS: The 193,500-square-foot school cost $54.5 million to design, construct and equip. (The price tag included three new tennis courts and two ball fields on the old site of the high school.) The senior center tab was $1.5 million. Combining the two projects saved the town between $300,000 and $400,000 by having the senior center tap into the high school infrastructure (mechanical, electrical, water systems) already in place. The state provided a capital reimbursement grant of approximately $19 million to build the school. The town paid the full-cost of the senior center. While the shared building was the most expensive project the town will ever have, says Joe Markarian, chair of the school building committee, "In hindsight, it was a bargain. It's a civic asset and encourages other uses."

SPECIAL REQUESTS: The senior center did not want to be part of the school budget, and it asked for its own utility meters to control its own costs and overhead. (For natural gas, the bill is divided by the square footage of each facility.) Worried that they would be "bowled over in the halls by students," as Marilyn Hurwitz, the senior center's director, put it, and wanting autonomy, the senior center's representatives asked for and received a separate entrance from the high school. Since many senior center participants drive, the town council requested ample parking. On some days, there's still not enough.

THE RESULTS: The Swampscott Senior Center features a living room with a fireplace and three activity rooms or classrooms that are busy from 8 a.m. to 4:30 p.m. The center can accommodate 90 for lunch. There's a health clinic and administrative offices. Many senior center members participate in a Friday tap class in the high school's dance studio. The students and the seniors occasionally interact, such as when World War II or Korean War vets visit high school history classes to share their experiences. Twice a year, students help the seniors with their cell phones, computers and tablets. Student athletes sometimes talk sports with the senior center's men's club. Students have come by to learn to knit or cook, and senior center members are provided free tickets to school performances. Says Hurwitz: "We have 10 times the opportunities here than we did before."

Sally Abrahms writes about caregiving, baby boomers, housing, retirement and aging-in-place topics. See "It's Smart to Share Spaces," her companion article to this one. | Article published in January 2017