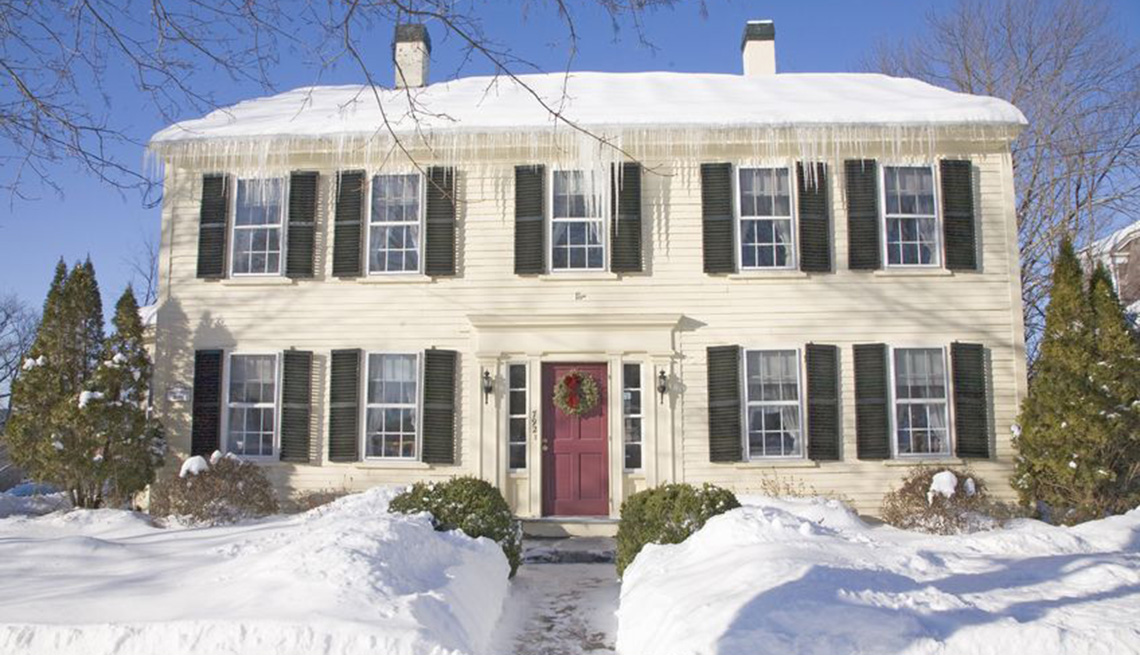 Eight out of 10 people over age 45 "strongly or somewhat agree" with the statement "What I’d really like to do is remain in my local community for as long as possible." And that includes people who live in places where snow typically blankets the ground from November through March.

To many people, anywhere in Minnesota would be among the worst imaginable places to retire. Winter is long, dark and icy with lots of snow to shovel.

Yet the vast majority of Minnesotans remain in the state after the age of 50, and some folks actually move there from other states.

Overall, Minnesota's net population loss of people ages 60 to 69 through migration is a scant 2,200 a year out of 5.5 million residents. Not only that, more people between the ages of 50 and 60, as well as those over age 70, move to Minnesota than move away, according to the state demographer's office.

Indeed, in 2017 Minnesota ranked 5th among all states as a good place to live for older adults, according to a study by Bankrate.com. In fact, eight states that experience full-blown winter weather rank among the study's "10 Best States to Retire." 1. New Hampshire; 2. Colorado; 3. Maine; 4. Iowa; 7. Massachusetts; 8. South Dakota; 9. Wisconsin; 10. Idaho. These are the results even though weather was one of the criteria researchers examined.

The desire to age in place is strong among older Americans. Eight out of 10 people over age 45 "strongly or somewhat agree" with the statement "What I’d really like to do is remain in my local community for as long as possible." (And that includes people in places where snow blankets the ground from November to March.)

The cold winter solution for many is not to escape it but to love it. Mark VanderSchaaf remembers how thrilled he and his wife Elizabeth were about moving to St. Paul 30 years ago.

But as they grew older, the Twin Cities began to feel less perfect. The idea of enduring subzero temperatures and icy sidewalks for the rest of their lives prompted the couple to look south or west for a new home. They eventually decided on Seattle, and started making plans to move there after Mark retired.

An exploratory trip convinced them to stay put in St. Paul and instead spend a few weeks each winter in Miami or San Diego.

House hunting 1,500 miles from home reminded the pair how much they would miss their friends, their neighborhood, their house, their church community, the local parks, the Minnesota Orchestra, the St. Paul Chamber Orchestra and the numerous social networks in which they take part. Indeed their neighborhood sports a corps of volunteers — St. Anthony Park Seniors — that over the past 35 years has helped 3,500 people stay comfortably in their homes.

What about the frigid air and slippery streets? Mark points out that a bus line a half-block from their house connects to both downtown Minneapolis and downtown St. Paul. If the icy sidewalks ever become too difficult, Mark and Elizabeth could join the ranks of people moving downtown, where many buildings are connected by second-story skyways (see the photo below) that allow residents to stroll around all winter in shirtsleeves and tennis shoes. 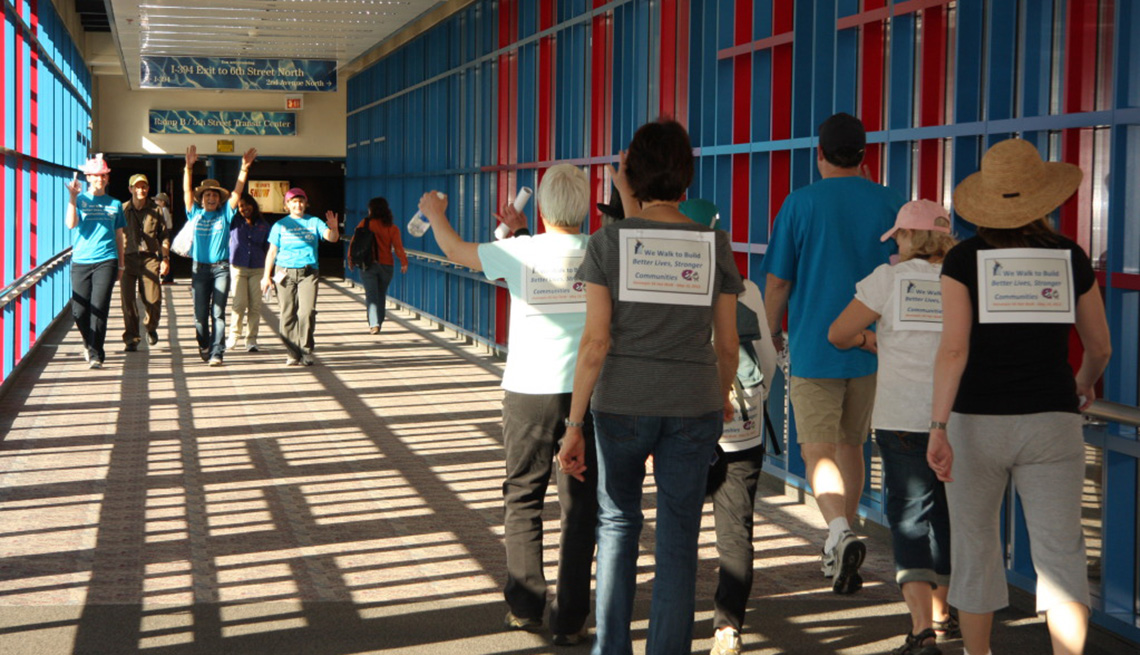 Photo from Alliance for Healthier Minnesota

Two walking groups in a 5K to promote wellness meet inside the Minneapolis skyway system.

Even rural Minnesota hangs on to many older residents and lures new ones. John and Christie Rasmussen moved to Park Rapids (population 3,700) from Omaha in 2009, after he retired from a law career that had taken them around the Midwest and south to Texas. They've spent summers in the area, which is nestled in the lakes and woods of Northern Minnesota, since buying a vacation home outside town in the 1970s.

"I get out everyday, even when it's 30 below to walk or cross-country ski on the lake," says John. "I can't stand to just stay around the house. And we go into town a lot. I'm at meetings or the Bella Caffe coffeeshop. My wife volunteers at the hospice."

The cold doesn't daunt Pat and Paul Dove, either. In fact, the couple started coming to Park Rapids to escape the summer heat of southern Indiana, where Paul was a professor of music at the University of Evansville and Pat taught culinary arts at the local high school. They moved to Minnesota in 2000 and stay at their home on a lake throughout the winter.

"We go downtown almost every day. It's the social hub," says Paul, who founded the summer stock Northern Light Opera Company in town. "They do a great job of clearing the sidewalks so it's easy to walk around." Main Street (known as Main Avenue) has been overhauled with wider sidewalks and narrower streets at intersections to make it easier for people on foot to cross.

"The number one problematic issue in winter for older adults is not the cold, because you can dress for the temperature, it's isolation."

"The answer is not moving south," says Gil Penalosa, founder of 8 80 Cities, which helps citizens improve communities for residents of all ages. The Colombian-born Penalosa notes that people can be just as isolated at home by hot weather. "In cold-weather places we just need to make it easier for people to get out. We need to plow the sidewalks. We need better upkeep and materials in crosswalks, so they are not crumbling or slippery, and we need better lighting, because it's dark a lot of the day."

Walkability expert Dan Burden has worked in more than 3,000 North American communities. He points to shining examples of cities that look out for older people in winter weather.

"Depending on individuals — whether they're homeowners or business owners — to clear sidewalks is not practical," Burden says. "It's hard for older people, and when even just one person on a block can't shovel, the entire sidewalk's not useful for anyone."

Walking can still be treacherous when everyone dutifully shovels the sidewalks because snowplows clearing the streets leave behind icy mounds that blockade sidewalk. "This happens in 95 percent of the snowy cities I work," Burden says. Golden, Colorado, tackles the problem by setting rules requiring snowplow operators to keep sidewalk entrances open.

"Schools should become community hubs after the kids go home in the afternoon. People of all ages can hang out, meet other people, walk the hallways for exercise, use the gym. It doesn't cost much and really enriches the place. Unfortunately, a lot of American cities don't allow schools to be used in such ways — even though the people wanting to use the school are the ones who paid for the school."

Just as critical for making communities great places to live year-round are lively spots for people to gather.

"A lot of cities plan all their festivals and events for the summer," notes Penalosa. "It's easy to have fun in the summer. It's helpful for a community to make something happen in the winter, when people really need it."

"Winter is really a question of mental attitude," Penalosa adds. "It's up to us how much fun everyone can have this time of year."

Jay Walljasper is a writer, speaker and consultant on how to make communities more successful, lively and fun. He is author of the "Great Neighborhood Book" and lives in Minneapolis year-round!