Americans over age 50 are transforming the economy — and conventional wisdom about aging — according to The Longevity Economy: Generating Economic Growth and New Opportunities for Business, a study published in October 2013 by Oxford Economics and commissioned by AARP. State-specific data was released in 2014. (See sidebar and below.) 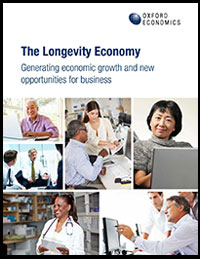 Links to downloads of state and local data and analysis can be found at the bottom of this page.

“It is difficult to draw any other conclusion than that the aging population of the United States is a significant net positive contributor to economic growth and prosperity,” observes Jody Holtzman, AARP Thought Leadership senior vice president, adding that such a conclusion “challenges the usual argument in Washington where serving the needs of over 100 million people is viewed as an unaffordable cost and financial burden.”

According to the report, “people over 50 outspend the average consumer across most categories, and the economic activity they generate affects all sectors of the U.S. economy.”

As a result, specific industries such as health care and technology are being pushed to innovate and expand in new directions. The overall economy gets a boost, too, as retirees and workers age 65 and older spend their Social Security and Medicare benefits. The economic gains cut across generations in part because people over 50 provide resources to both their parents and children.

The Longevity Economy’s far-reaching influence generates significant, though complex, business opportunities. For example, companies designing and developing products that anticipate the demands of this ever-growing demographic must also account for the population’s shifting wants and needs. More than ever before, people 50-plus are choosing to stay in the workforce longer, many of them launching second careers or starting new businesses. To keep up with this shift, employers must meet the needs of a multigenerational workforce.

The Longevity Economy by State