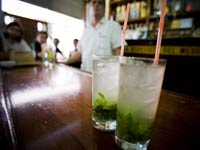 En español  Here's a spirited look at the story (or stories) behind four classic summer cocktails, along with recommendations on a few great places to drink them.

How it happened: This Cuban concoction became popular in the 1930s, but its history goes back to the 1800s. English pirate Richard Drake supposedly favored a similar drink named El Draque while he was pillaging the Caribbean and South America.

Where to drink it: With Cuba off-limits for most of us, try the Latin scene of  Miami's South Beach. Locals enjoy the cool comfort of Ola and the aptly named Mojitos Cuban Cuisine. For a Louisiana twist, go to Covington, north of New Orleans, where the signature mojito from Del Porto Ristorante features both ruby-red-grapefruit vodka and juice, fresh basil, and honey.

How it happened: This tropical favorite was first blended in California by saloon owner Victor "Trader Vic" Bergeron in 1944. A South Seas traveler, Bergeron eventually introduced his mai tai—Tahitian for  "the very best"—to the Hawaiian Islands.

Where to drink it: Try the original at Trader Vic's at least once, advises Atlanta master mixologist Darrell Autrey. The chain has 22 locations worldwide, including Los Angeles, Chicago, and even Dubai. If you prefer a Polynesian paradise, visit The Westin Moana Surfrider's Beach Bar in Waikiki. You can drink your expertly blended mai tai under one of the largest banyan trees in Hawaii, steps from the Pacific surf.

How it happened: So many cities want credit for this cocktail. It was likely invented in Mexico in the 1930s; our favorite story is that a Tijuana restaurateur created it for an aspiring actress who was allergic to hard liquors—except tequila.

Where to drink it: Visit Hotel Finisterra's Whale Watcher Bar in Cabo San Lucas, where you'll see humpback whales glide by. In Key West, locals love Morada Bay Beach Cafe, where you can sink your toes into the sand while sipping 'ritas in 32-ounce Mason jars rimmed with salt.

How it happened: The city of Martinez, California, claims to be the martini's boozy birthplace, saying the drink was mixed for a thirsty gold miner in 1874. Others say the martini was named for Martini & Rossi vermouth.