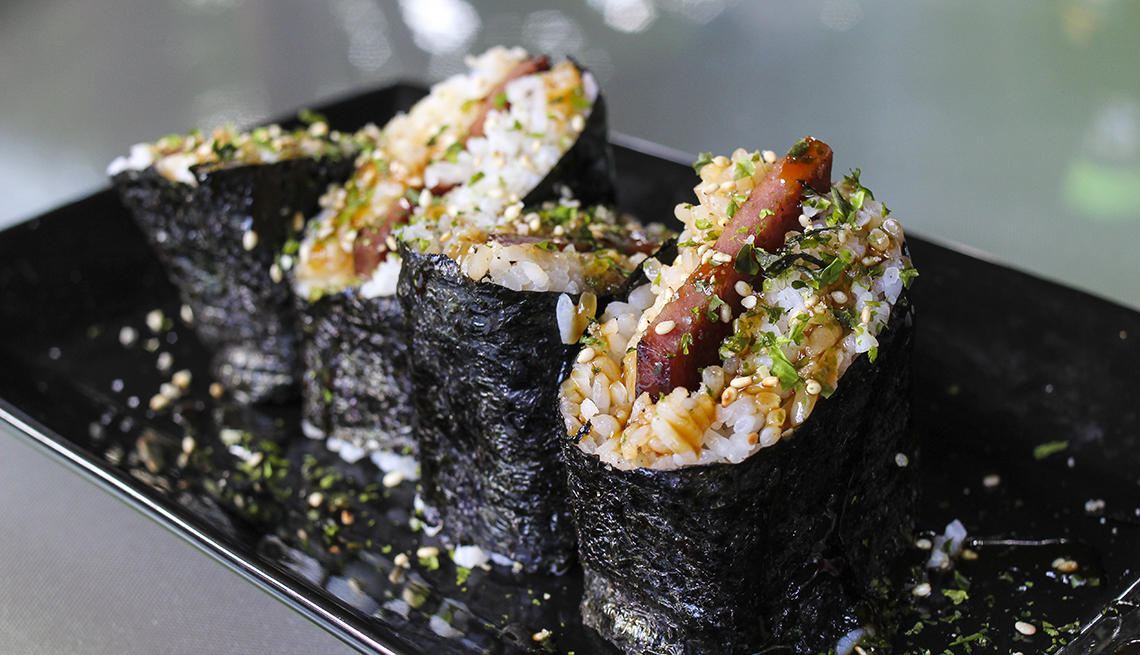 Having originated in Hawaii, Spam Musubi is a variant of sushi made with Spam instead of sashimi.

May is Asian American & Pacific Islander (AAPI) Heritage Month, and to honor the rich history and accomplishments of AAPIs throughout the history of the United States, AARP is proud to celebrate the month with articles that showcase their accomplishments and culture.

In our final article celebrating AAPI Heritage Month, here are examples of how Asian culture, through its varied cuisines, has spread and assimilated with other cultures to create new, exciting fusion dishes.

Korean American entrepreneur Roy Choi's Kogi BBQ food trucks in Los Angeles merged a new, mobile culinary trend (along with social media marketing to let followers know where to find his trucks) with an irresistible ethnic mash-up: a fusion of Korean and Mexican flavors. Korean Calbi short ribs served up from a taco truck? Well, all right! Kimchi Quesadillas? Cross-cultural heaven! In some ways, Choi opened the door to many fusion fads that have followed.

Epicurious published a Kimchi Quesadillas recipe straight from the fusion-meister himself.

Spam Musubi is the inevitable result of East meeting West. Born in Hawaii, where Spam is a basic food group, thanks to the U.S. military introducing the canned meat in the pre-World War II days, Spam Musubi is basically a variant of sushi made with Spam instead of sashimi. There are variations within Spam Musubi. Some can be tightly rolled with strips of Spam inside, like a tekka maki, or tuna roll. Or it can be a brick of rice topped with a slice of lightly grilled Spam (soy or teriyaki sauce and Tabasco or sriracha hot sauce optional) with a strip of nori seaweed around it, like a belt holding the musubi together. Or it can be fully wrapped inside a square of nori folded like edible origami. It's another culinary cross-cultural heaven!

Here’s a recipe for Spam Musubi from AllRecipes.com, perfect for your summer luau.

Some Chinese immigrant workers left the United States after the Chinese Exclusion Act of 1882 and found refuge in Baja, Mexico. As always, the wonder of ethnic cuisine is that it adapts to local ingredients wherever immigrants go. Not only were Chinese unable to emigrate to the United States after 1882, but Chinese in America before the ban were subject to miscegenation laws and couldn’t marry Caucasian women. With some Chinese men marrying Mexican women, a cross-cultural pollination occurred, which led to Mexican-Chinese cuisine in the Southwest — fried rice with spicy chorizo sausage, mango served with steak, or dishes heated up with jalapeños or chile peppers. For a variation, seek out New York City’s Cuban-Chinese diners.