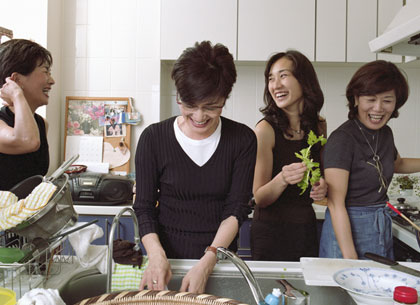 Dorothy Clements had never made café brûlot before, but with 40-plus years of cooking experience behind her, she didn't figure it could be that hard. Nevertheless, she enlisted the help of the five women friends who had gathered at her home for the evening. "As soon as we poured on the brandy, the wooden spoon we were stirring with burst into flames," Clements recalls with a laugh.

Amid shouts of "stir, stir" and "blow, blow," the flame finally went out. And so was born The Flaming Spoon Dinner Club.

"We're a crazy bunch of women," Clements says of the group of six widows from North Little Rock, Arkansas, who meet once a month for a home-cooked meal and some lighthearted banter. "They're wonderful friends and a great support group."

They're also part of a trend. Across the country, groups of friends (and sometimes strangers) are forming cooking clubs, not just to share a meal but to dish—about food, relationships, and life. While informal cooking clubs have been around for years, the recent publication of three cookbooks (The Flaming Spoons' own compilation of recipes and two books by New York City-based The Cooking Club) has revived interest in the idea.

"We didn't invent the cooking club, but we feel like we've helped define it a little more," says Sharon Cohen Fredman of The Cooking Club, whose members didn't actually know how to cook in the beginning. "We don't consider ourselves gourmet," she adds. "Our recipes are still on the easier side. But complicated recipes don't scare me anymore."

So what, exactly, are cooking clubs? Think potluck, with a little more panache. Generally speaking, these are groups of friends who meet once a month to share a meal in one another's homes. Dishes can be brought already prepared, or club members can prepare them together. The host generally picks a theme and prepares the entrée, with other members bringing (or preparing) the appetizer, salad, vegetable, dessert, and beverage.

"We just have so much fun," says Clements. "And we're amazed at the success of our cookbook." (Entertaining With The Flaming Spoons, Morris Press, 2003.) "Who knew six little old ladies from Little Rock would be able to pull this off?"

If you think you might want to whip up your own cooking club, here are a few tips for getting started.

1. Decide how many people to invite—and who. Cooking clubs work best, says Irene Wassell, a member of The Flaming Spoons and food editor at The Arkansas Democrat-Gazette, when there are "just enough people to visit without having to stand up to eat." The Flaming Spoon Dinner Club and The Cooking Club each have six members, though three or four couples would also work. Both clubs say their members weren't good friends at first but became so over time. "I didn't even know two of the people when we first started," Wassell says. "Now, we've become very good friends. We're even planning to take a trip to Canada together this fall."

2. Choose a (consistent) meeting time. The Cooking Club meets on a Sunday, while The Flaming Spoons usually pick a Saturday night. "We're flexible, and it's never really become an issue for us," Fredman says. "Nobody ever cancels."

4. Don't be afraid to fail. "Every one of us has made something that has flopped," Fredman says. "But I think if you try new recipes, you gain confidence. And you gain a new appreciation for food and cooking."

5. Stay regular. "We don't let a month go by without meeting," Wassell says. "If you start doing that, it's easy to just let it die out."