En español | "Latinos have been part and parcel of the American musical landscape, dating from even before Europeans arrived in many parts of this country," says Marisol Berríos-Miranda, curator of American Sabor: Latinos in U.S. Popular Music, the Smithsonian Institution's traveling display of pulsing sounds, sights and lyrics. "Hopefully, this exhibit will correct the impression that many Americans have of Latinos as immigrants and foreigners."

Also listen to: Our interview with curator Marisol Berríos-Miranda (in Spanish). 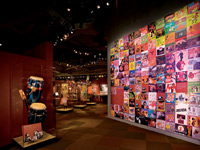 The exhibition portrays Latino music styles, all highly danceable: from mambo and salsa to the lesser-known huapango and charanga. "We've seen people on the dance floor in wheelchairs dancing with their little ones," says Berríos-Miranda.

Out in the west, Los Angeles gave rise to Linda Ronstadt, whose great aunt had a career in Mexican vaudeville. San Francisco claims Carlos Santana, a megastar of the psychedelic hippie scene who became a dazzling innovator on guitar.

The Latino influence shows up in examples like Herb Alpert's Tijuana Brass's Spanish Flea, which adorns an exhibit wall. In a video interview, Alpert, a Jewish trumpeter, describes how the rudiments of his smooth sound came to him while listening to pasodobles (Spanish marches doubling as dances) at a Tijuana bullfight.