En español  |  Robert Redford enthralled the crowd, Carl and Rob Reiner drew screams of laughter, and Colin Firth and the rest of The King's Speech retinue gave the evening a royal polish at AARP The Magazine's Movies for Grownups Awards gala Monday in Beverly Hills, Calif.

Behind the Scenes at the Gala. Watch

The King's Speech, which won Best Movie for Grownups and the magazine's Readers' Choice honor, clearly was a crowd favorite. Among those singing its praises was Sally Field, who said, "I have a lot of people who I really like who made really wonderful movies, so it's hard for me to say my favorite, but I personally liked The King's Speech a hell of a lot."

Best Supporting Actress winner Phylicia Rashad, honored for her performance in For Colored Girls, said, "I just took my mother to see The King's Speech and she absolutely loved it." Jacqueline Bisset also counted herself as a fan of The King's Speech and added, "I loved The Kids Are All Right. And I loved Biutiful. I liked The Fighter very much, too.  It's awful to give a prize to only one, you know. They all deserve prizes."

At a cocktail reception before the awards dinner, Larry Hagman showed that his Texas-sized personality is as colorful as ever at age 79. He posed for photos with fellow guests and talked about reprising his role as notorious J.R. Ewing in the new Dallas TV movie, which is beginning production in May. "I liked Black Swan. I thought it was a weird film. I mean, it's really different," Hagman said. "And I liked True Grit."

Lesley Manville, this year's Best Actress winner for her work in Mike Leigh's Another Year, made it clear she is delighted with her Movies for Grownups nod. "It means they've got it; somebody's got what I'm doing." Indeed.

Inside the elegant ballroom, the British contingent — and domestic admirers of The King's Speech as well — enjoyed more accolades being heaped upon the pitch-perfect winner.

Introduced by co-star Geoffrey Rush, Best Actor recipient Colin Firth got a standing ovation and cheers. "It's funny how much fun we have with the word 'grownup,' because we actors just don't make very convincing grownups," said the actor who is also considered an Oscar front-runner for his heartrending portrayal of the emotionally scarred King George VI. "We act in imaginary worlds and we find it very difficult to come to terms with the real one. When I told a senior member of my own family I was being acknowledged for something grown up, she said, 'Finally.' " Firth thanked the Movies for Grownups voters "for what, and I have yet to run this by my wife, but for what I hope is a rite of passage." 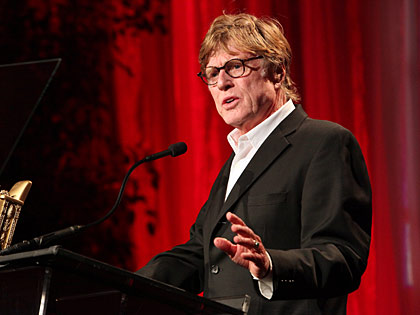 There was comedy royalty in the forefront of the evening in the form of father-and-son funnymen Carl and Rob Reiner. The senior Reiner introduced the younger, whose charming Flipped movie won as Best Intergenerational Film. He described baby Robbie as being so alert he never slept, and he memorized part of Hamlet's soliloquy by the age of 2 1/2 — which the elder Reiner imitated in a toddler voice, complete with "swings and arrows." When Rob's turn at the microphone came, he began by saying, "I want to thank my father for making love to my mother 64 years ago."

Throughout the evening, opened by AARP The Magazine Editor Nancy Perry Graham, winners paid tribute and thanks to Redford, who was seated at the front center table. Andy Garcia, for instance, took time from his acceptance speech for his City Island Best Comedy statuette to acknowledge Redford's enduring contribution to the independent filmmaking world with his Sundance Film Institute and Film Festival.

Introduced by Field, a friend and 15-year board member of his Sundance Institute, the movie titan and committed environmentalist gamely waited out a long, enthusiastic standing ovation before making his remarks.

He said, "I like to think that's what carries me forward — knowing that success and the accolades are fleeting, they come and they go, but the work remains. The only thing you can do is just keep trying, and you do the very best you can. T.S. Eliot said, 'There is only the trying, the rest is not our business.' " 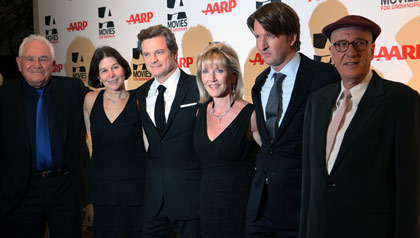