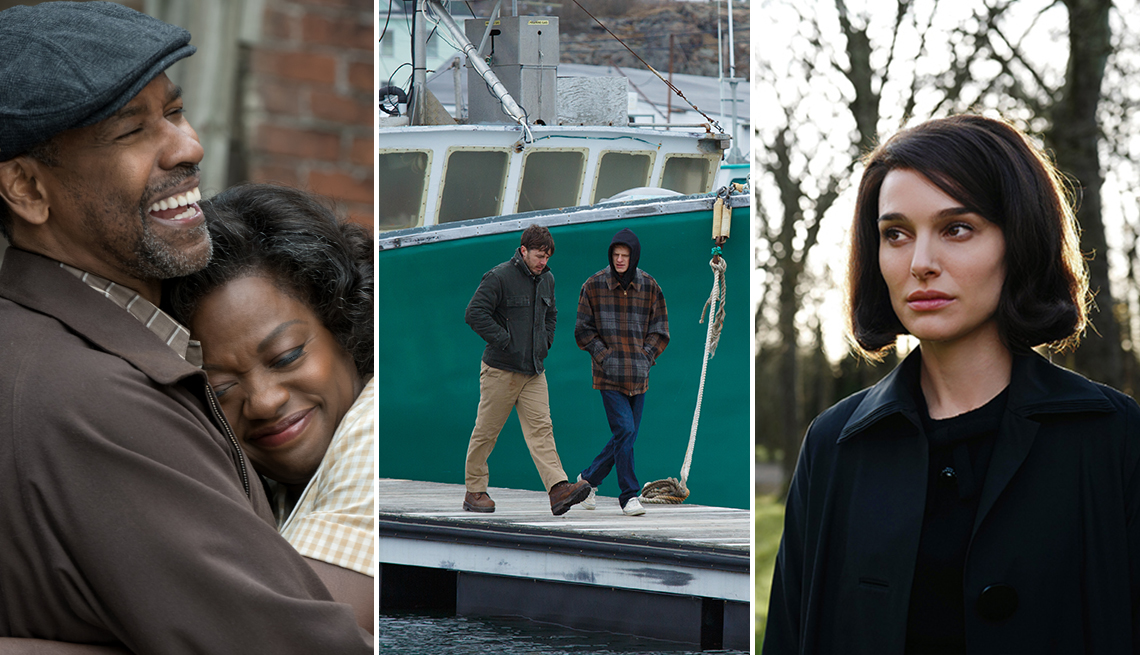 We have our favorites. Now tell us yours.

Jeff Nichols’ Loving, the true-life story of a Virginia couple’s fight to legitimize their interracial marriage in the mid-’60s won our 2016 Best Movie for Grownups award this year. That film along with the AARP editors selected picks will be honored at the 16th annual Movies for Grownups Awards on Feb. 6 in Los Angeles.

For our Readers’ Choice Award, though, we need to hear from you. Take this quick poll and tell us your favorite movie of 2016. Deadline for voting is Jan. 25, 2017.

Called a thinking person’s sci-fi film, Arrival is a subtle and thoughtful alien invasion movie that puts at its center the idea that any relationship worth having is one we enter knowing that it may end in heartbreak. Amy Adams’ performance as a linguist trying to communicate with the extraterrestrials is stellar.

Fierce performances by Denzel Washington and Viola Davis power this drama, exploring hard truths of family life and the American dream. The late August Wilson wrote the script, based on his Pulitzer Prize-winning 1983 stage play — and directing his first film, Washington makes a triumphant debut behind the camera. FULL REVIEW

Hello, My Name Is Doris

Sally Field is adorable, tragic and hilarious as Doris, an eccentric 60-something whose life has gone unchanged for too many years — until she falls for a hunky young art director at her office (Max Greenfield). In turns a love story, a rock concert and a social media tutorial, Doris proves it’s never too late to shake up your own life. Tyne Daly is an absolute hoot as Field’s brutally honest best friend. FULL REVIEW

Natalie Portman paints an unflinching portrait of Jacqueline Kennedy, whose poise, grace and vulnerability galvanized the nation in the dark days after JFK’s assassination. If you lived through that awful November, you’ll shiver with recognition as director Pablo Larraín re-creates, with chilling detail, the cold wind of grief that engulfed not only one man’s family, but also the entire nation. FULL REVIEW

Harking back to the golden age of movie musicals with its bright colors and dreamy sequences — yet decidedly contemporary in its view of modern life — La La Land reminds us that great filmmaking and catchy songs are timeless crowd-pleasers. Emma Stone and Ryan Gosling play struggling performers whose love affair is punctuated by one snappy song-and-dance scene after another. FULL REVIEW

Take note, any parent who has lost track of a kid in the grocery store: Nicole Kidman will choke you up more than once as an adoptive mother in Australia who must let her grown son (Dev Patel) return to India in search of the family he lost on a crowded train 25 years earlier. In a story that deals with life’s ever-mounting list of what-ifs, director Garth Davis delicately balances his characters’ scales of loss and gain.

Within the living memory of many Americans, interracial marriage was illegal in a huge swath across the U.S. In telling the true story of the interracial Virginia couple (Joel Edgerton and Ruth Negga) whose quiet insistence on their right to love each other went all the way to the U.S. Supreme Court, writer-director Jeff Nichols eschews dramatic speeches and over-the-top villains. From small-town America to the county jail and all the way to Washington, this inspiring story proves that love may yet conquer the world. FULL REVIEW

Manchester by the Sea

There are no easy Hollywood answers in this sometimes searing, often hilarious story of life’s unexpected turns. Casey Affleck gives a top-notch performance as a janitor whose world is forever changed when he suddenly becomes the guardian of his nephew (Lucas Hedges). Navigating the complicated world of loss, family and resilience, Manchester by the Sea taps into what it means to be human. FULL REVIEW

Leave your modern-day sensibilities behind as director Martin Scorsese plunges you into 17th-century Japan, where two Jesuit priests (Adam Driver and Andrew Garfield) risk their lives to locate their missing mentor (Liam Neeson). Based on the acclaimed novel by Shusaku Endo, it’s the kind of tale of brutality and beauty that only the veteran Scorsese could pull off.

Tom Hanks rocks a spectacular head of white hair as Capt. Chesley “Sully” Sullenberger, who safely landed US Airways Flight 1549 on the Hudson River in January 2009. Still Hollywood’s most efficient storyteller, director Clint Eastwood nails the landing with white-knuckle aplomb — then guides us through Sully’s ensuing post-traumatic stress disorder as an investigation into the flight unfolds. FULL REVIEW