Kathy Griffin, two-time Emmy winner and Grammy-winning comedian, will host AARP's 15th Annual Movies for Grownups Awards in Beverly Hills Feb. 8, presiding over an evening that will include honors for Spotlight as the best movie of 2015, and Bryan Cranston and Lily Tomlin as the best actors in starring roles.

"I'm so honored to be hosting the Movies for Grownups Awards again," says Griffin, who also did the honors in 2014. "For one thing, it's one of the few nights of the year anyone refers to me as a grownup."

The 2015 Movies for Grownups Awards — chosen by the editors of AARP The Magazine and announced today — go to an array of actors, films and filmmakers whose work has particular relevance to a 50-plus audience.

The best picture award goes to Spotlight — a thrilling story of how a team of Boston Globe reporters in 2001 uncovered systemic crimes by pedophile Catholic priests in the Boston archdiocese — for its sophisticated approach to telling what could have been a sensational account. Bryan Cranston is best actor, honored for his performance in the title role of Trumbo. Increasingly recognized as one of America's great actors in movies, on TV and on Broadway, Cranston immerses himself in the part, masterfully revealing his character's qualities, both good and bad.

In Grandma, Lily Tomlin's plainspoken central character — a caustic, rough-edged woman whose humanity is slowly revealed as the film unspools — is a crowning achievement in a career that has for 50 years delighted audiences of all ages. 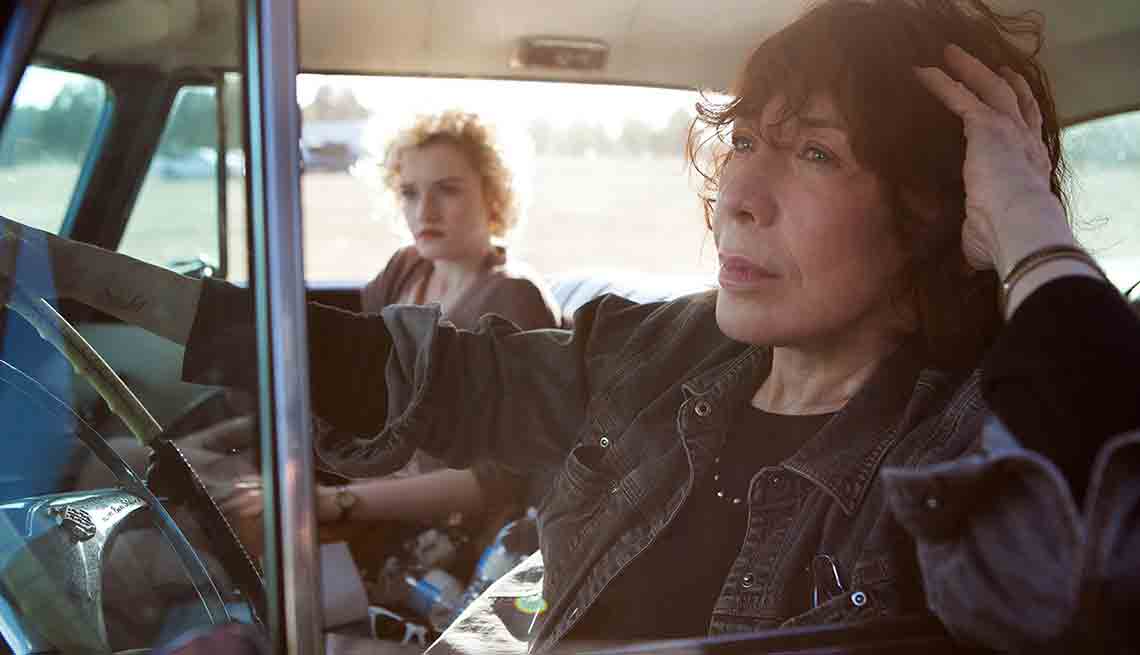 Lily Tomlin plays a grandmother who helps her granddaughter, Sage (Julia Garner) pay for an abortion.

Mark Rylance is best supporting actor for his role as a philosophical Soviet spy in Bridge of Spies — a quiet, thoughtful performance that nearly steals the film from its star, Tom Hanks.

The best supporting actress award goes to Diane Ladd as the ever-optimistic grandmother in the comedy Joy. As the singular bright spot in the central character's grim family life, Ladd's character, the most loving, enthusiastic mentor imaginable, brings much-needed joy to Joy.

Ridley Scott is the Movies for Grownups choice for best director for his visionary adventure film The Martian, in which he exquisitely balances a sense of danger with high adventure and good humor.

David O. Russell's freewheeling script for Joy — another of his trademark examinations of mismatched protagonists who find their common frequency — earns him best screenwriter honors.

Writer/director Nancy Meyers once again proves herself to be the poet laureate of boomer angst with The Intern. Her film, starring Robert De Niro as a retiree trying to fit in with an Internet startup shopping site, is the year's best comedy.

From Iceland, Rams, a movie about two brothers who, after having not spoken in more than 40 years, team up to save their family business, is best foreign film. The Last Man on the Moon, the story of astronaut Eugene Cernan — NASA's final lunar explorer — wins best documentary.

The best buddy picture award, recognizing the essential ingredient of friendship in life beyond 50, goes to Learning to Drive. It stars Patricia Clarkson and Ben Kingsley as a driving teacher and student whose lives intersect at precisely the right moment.

Finally, the best movie for grownups who refuse to grow up award goes to Pixar/Disney's animated mind-probing fantasy Inside Out, a delightful yet profound story of how we need the full spectrum of our emotions, from joy to sadness, to be fully human.

Screen legend Michael Douglas will accept the Movies for Grownups career achievement award at the event, to be held at the Beverly Wilshire Hotel. Douglas, whose award was announced last month, also will be featured on the cover of the February/March issue of AARP The Magazine.

All the winners, as well as a glittering lineup of presenters, may come in for some good-natured ribbing from host Griffin, whose 80-city comedy tour Like a Boss continues into summer 2016. "Having never acted like a grownup, I doubt I will start on Feb. 8," Griffin says. "But this will be a great event, count on it. These nights have become as star-studded as the frickin' Academy Awards."