Join the fight against age discrimination in the workplace and help workers like you. Share your story.

It would be hard to find someone more universally respected than the tireless woman who coached the University of Tennessee women's basketball team to unheard of heights over the past four decades. Pat Summitt pushed her players to 1,098 wins in her 38 years of coaching the Tennessee Lady Volunteers — more college basketball game wins than any other coach, male or female — until she stepped down last April after a diagnosis of early-onset Alzheimer's disease. 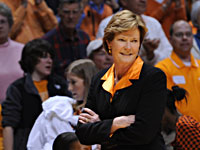 Summitt might have withdrawn quietly from the public spotlight in the months since her semi-retirement (she's now "head coach emeritus"), but instead she's using her celebrity to shine a light on the disease that affects an estimated 5.4 million Americans. She's established the Pat Summitt Foundation, a fund of East Tennessee Foundation that is dedicated to public education about Alzheimer's, supporting caregivers and patients, and funding research. Because of her outstanding efforts, AARP gave Summitt the 2012 Andrus Award for community service, the organization's highest honor, on Dec. 6.

It's the second time this year that AARP has honored Summitt. After her diagnosis but before she stepped down, AARP The Magazine chose the coach for a 2012 Inspire Award. At the time, Summitt told the magazine that she wanted her players "to understand that this is what I'm going through, but you don't quit living. You keep going."

Shortly after stepping down, Summit was awarded the Presidential Medal of Freedom from President Obama and received the Arthur Ashe Courage Award at the annual ESPY Awards ceremony.

Patrick Wade, director of Summitt's Knoxville-based foundation, says the coach "is very humble and modest, so I don't think she'd say this, but her reputation is so incredible that she's bringing attention and awareness to the disease in a way that I think few people could do." As soon as she announced her diagnosis, her ardent supporters started wearing "We Back Pat" T-shirts, including players from Tennessee's rival teams.

Summitt has been an icon in women's basketball for so long, it's hard for some fans to imagine the sport without her. After growing up on a tobacco and dairy farm in Tennessee, she set scoring records as a player on the Lady Vols basketball team, and won a silver medal with the U.S. women's team in the 1976 Olympics in Montreal (when she was Patricia Head). She was offered the head coaching job at Tennessee when she was only 21 and women's sports were still on the sidelines. The players had to sell doughnuts to pay for their uniforms.

Summitt still attends her team's practices and games as often as she can, but is completely dedicated to the goals of her foundation, says Wade: "She really wants to turn her disease into a positive and help others."

Visit the AARP home page for tips on volunteering