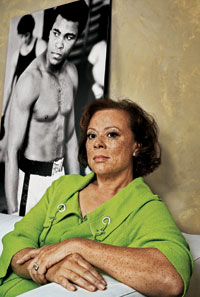 When Yolanda "Lonnie" Ali married the most famous athlete in the world in 1986, she didn't know much about the degenerative neurological condition that was just beginning to seize the body of then 44-year-old Muhammad Ali. Since that time, the effects of Parkinson's disease have steadily stolen the former heavyweight champion's physical abilities, leaving his fourth wife in the difficult multiple roles of partner, caregiver, and public voice for more research into the disease. "I didn't take it on as 'our illness,' " says Ali, 53. "Better to externalize it and make it into something more positive." The serene and scholarly Ali may be less loquacious than her husband was in his prime, but she is no less determined: her advocacy efforts helped spawn the Muhammad Ali Parkinson Center at Barrow Neurological Institute in Phoenix, and she has testified before Congress on behalf of the National Parkinson Foundation.