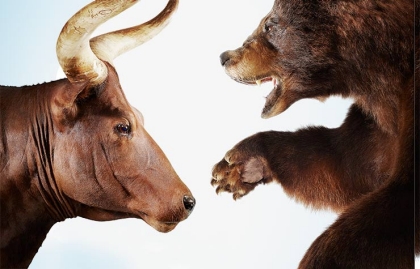 Take the bull by the horns in 2016 by knowing what to expect from the stock market and investing.

If you're a saver, all you've gotten from your bank in the last seven years has been a wan smile since the Federal Reserve pushed its key federal funds rate to near zero after the 2008 financial crisis.

Unfortunately, the economy hasn't been strong enough since then to justify raising interest rates. But the Fed has been signaling through most of 2015 that a rate hike is coming, so it's possible you may get more from your bank CD in 2016. "But if you do, it won't be much more," says Greg McBride, chief financial analyst for Bankrate.com. Rates on longer-term CDs are largely governed by the bond market, which has been keeping rates near record lows.

The stock market has gained an average 5.8 percent in the fourth year of a president's term since 1833, says Jeff Hirsch, editor of the Stock Trader's Almanac. But the picture is not as clear in a president's eighth year. The Dow Jones industrial average has lost an average 13.9 percent in a full two-term president's final year since 1900 (there have been only six), Hirsch says. By the end of a second term, Wall Street senses change in the air. Wall Street hates change.

Bottom line: In 2016, the stock market might be a better indicator of who is going to win the election than the election will be an indicator of how the stock market will fare, says Sam Stovall, the U.S. equity strategist for Standard & Poor's Capital IQ. "If the market is up between July 31 and Oct. 31, then 8 times out of 10, the incumbent party is reelected," Stovall says. "If it's down, the incumbent party is replaced."

The price of a barrel of West Texas Intermediate (WTI) crude oil — the type produced in the U.S. — tumbled in 2015. Tom Kloza, global head of energy analysis for the Oil Price Information Service, thinks WTI crude hit bottom when it closed just below $40 a barrel in August. His estimate for next year: somewhere between $40 and $60, barring a recession.

For most of 2016, gas prices should remain relatively low, as should prices for home heating oil.

Bottom line: Modestly higher oil prices would be good news for energy company stocks. Energy companies saw their earnings fall 67 percent in the first three quarters of 2015, and their stocks got pummeled, too. Dividend-paying companies such as ExxonMobil and Chevron saw their prices fall and their dividend yields increase — a tempting situation now for income-seeking investors. And big energy companies are widely held by many stock mutual funds.

Economic growth in the U.S. was modest throughout 2015, and few see it soaring in 2016. But even a lukewarm economy is better than what most of the rest of the world is seeing. Much of Europe was seeing deflation at the end of 2015, and growth in China and the rest of Asia was slowing, as well. Countries that produce raw materials — think Canada and Brazil — were particularly hard hit as demand from China slowed. As a result, many foreign central banks were stimulating their economies by cutting short-term interest rates or buying bonds.

If, as expected, the Federal Reserve raises interest rates, it will be virtually the only central bank on the globe doing so. And that means that money will flow to the dollar, which has already gained about 10 percent on the euro.

Bottom line: If you're invested in overseas stocks, a rising dollar will reduce your returns when the gains are converted back into dollars. But it could be a fine time to travel abroad, as the dollar gains in value overseas.

Ultimately, corporate earnings are the engine behind the stock market. According to Yardeni Research, stock analysts are predicting that earnings of companies in the S&P's 500 index will rise 9.3 percent in 2016. But that doesn't necessarily mean stock prices will rise 9.3 percent. It does suggest stock prices will enjoy a bit of a tailwind next year. In general, the strength of the economy will determine how well corporate America does next year.

Bottom line: Even with rising earnings, the forecast has enough unknowns to make 2016 a bumpy ride. If you want to dampen volatility, make sure that your portfolio is well diversified and that you have enough bonds and cash to ensure that a few bad weeks won't ruin your whole year.

John Waggoner is a freelance writer and former investing columnist for USA Today.