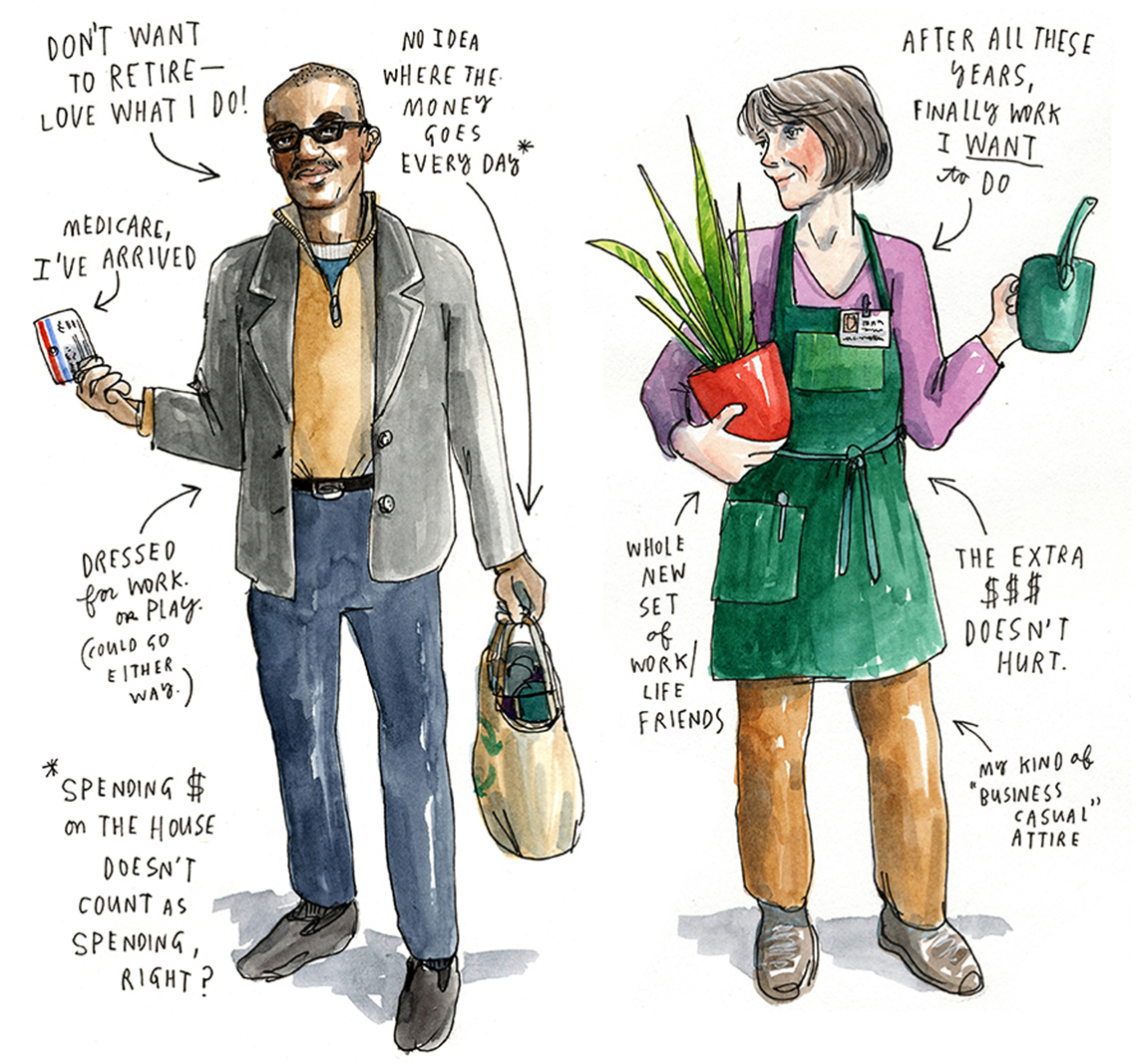 THE LOWDOWN: Work finally becomes fun, retirement planning remains critical, and you are spending money like there's no tomorrow. (Though there most certainly is.)

… aren't afraid to make a late-career jump … More than 40 percent of full-time workers in their 50s and early 60s switch jobs voluntarily. Doing so has benefits: Job switchers were 9 percent more likely to still be working at age 65 or beyond than those who stuck with their old roles.

… have nearly a 20 percent chance of not retiring in your 60s … Roughly four-fifths of Americans will be retired by the time they reach 70, an AARP/National Council on Aging survey of 2,250 older Americans showed. The flip side to that: Almost 1 in 10 people are still in the workforce as they enter their eighth decade.

… lead the nation in workforce growth … People in their 60s are the only age group in America that's seen solid employment growth in the past decade, with 5.9 million more working in 2016 than in 2006, according to the U.S. Bureau of Labor Statistics (BLS).

… and even retirees are getting jobs for the fun of it. Nearly 3 out of 5 retirees move into new lines of work. Eighty percent of them said they continued to work past age 65 because they wanted to, not just because they had to. They said working now, compared with how they felt about their jobs before retirement, is more flexible, fun and fulfilling — and way less boring and stressful.

You have likely saved less than your younger friends … The average 60-plus person's retirement savings goal: a respectable $300,000. The reality? The typical Joe or Jane who's that age has only $50,000 squirreled away — compared with $150,000 saved by the average 50-year-old worker. No wonder 54 percent of employed 60-year-olds plan to work until at least 70.

… and should get serious about retirement planning. Two in 7 people in their 60s admitted they're not confident their money will last through retirement, and 1 in 11 had no economic blueprint for their retirement years, a 2015 National Council on Aging survey revealed.

You own three or four credit cards and usually pay them in full … While many 60-somethings still carry credit card debt, some 60 percent of them pay their credit card bills in full each month; only 42 percent of people in their 50s do so.

… and have an impressively rising credit score. The average 60-something's credit score: 725, up from 700 in your late 50s. According to a Boston College economist who tracks consumer credit trends, scores rise with age, with the big bump between the fifth and sixth decades. Keep it up and you'll hit 775 in your 70s, he says.

You spend about $90 a day … Yikes! People in their early 60s said in a recent Gallup phone survey that they shelled out an average of $89 for purchases online, at the gas station, in restaurants, and at brick-and-mortar stores on a single day in March 2016. That's up from $55 a day during the depths of the Great Recession.

… and are dropping big bucks on basics. Forty percent of 60-somethings say they're spending more on home maintenance. They also say they're cutting back on travel, leisure-time fun stuff, consumer electronics and, uh-oh, retirement investing, a national survey found.

You can relax about the big debts … Three great things about money in your 60s: Forty-one percent of people in this age group own their home free and clear, compared with 24 percent of those in their 50s, according to one national survey. You likely aren't paying off a kid's college loan anymore (just 5 percent are). As a result, you've got breathing room. More than 55 percent of 60-somethings have three months' worth of emergency funds, whereas just 40 percent of young adults have this.

… are less stressed about money — and look great as a result. Just 31 percent of 60-somethings reported feeling major financial stress in a Federal Reserve study, a big drop from the 50s. All that good fortune looks good on you. Day-in, day-out wallet worry can make you look four years older. In contrast, feeling at peace about your finances can take three years off your appearance, a 2016 study noted. 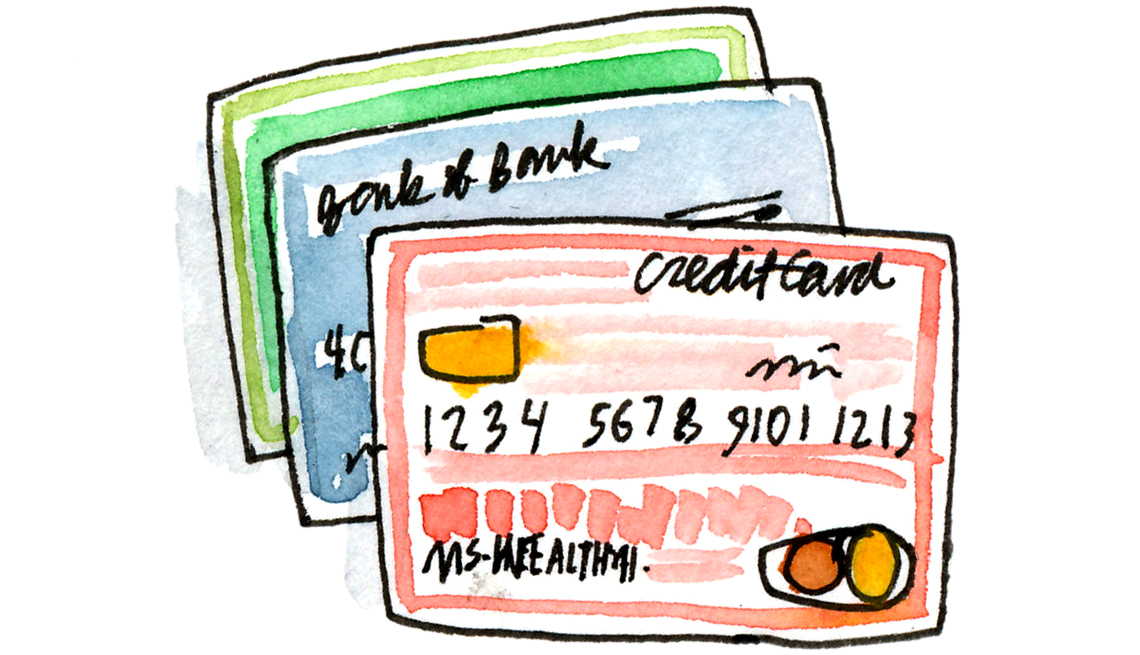 For most of the 16.2 million people in their 60s in the U.S. workforce, "finding a way to work longer and not claim Social Security so early makes a lot more sense for a secure, long-term retirement," says economist Steven A. Sass of the Center for Retirement Research at Boston College. What he suggests thinking about:

Don't underestimate the power of waiting. If you delay retirement until age 70, versus 62, you increase your benefits by 76 percent.

Delaying helps a lower-earning spouse. If your spouse outlives you, she or he can choose to collect your benefits instead of her or his own.

Want more family time and fun? Consider going part time after you turn 65. Once you've signed up for Medicare, your monthly health insurance premiums will likely cost less. If you've also paid off your mortgage and have a small pension coming in, going part time may bring in enough cash to keep you afloat without claiming Social Security. Downside: You may not be able to continue saving for retirement.

NEXT: What to expect from your wealth in your 70s.