Get used to hearing about "age-friendly cities" and "livable communities." 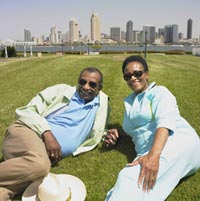 Age-friendly cities are on the rise.

See also: How You Can Age in Your Own Space.

On the whole, we are becoming an older population, and cities are actively getting ready.

There's a movement afoot to improve the quality of life for all residents — especially older Americans — and make it easier to age in their community. That means encouraging physical activity such as walking (walking = exercise = increased mobility = better health = staying in your home longer), while reducing dependence on cars. It means having convenient access to stores, parks, healthy food, and social and health services, as well as safe and readily available public transportation. It also means offering affordable and varied housing as residents' needs change, and revamping zoning codes to allow for thoughtful growth and development. And this especially means giving older people opportunities for social interaction and civic engagement such as volunteering.

Today, more than 300 livable community initiatives are under way nationwide, and state and federal agencies are awarding grants to research, test and implement new models. Creative and unexpected partnerships are forming among private businesses, municipal departments, government agencies, aging experts, nonprofits, academia, social service organizations, grassroots advocacy groups and senior centers to brainstorm how to make their city or town age-friendly for both the very active and the very frail. They conclude that what is good for older people — lots of parks, opportunities to exercise, healthy food, a safe and convenient transit system — is also good for everyone else. And there's the money factor, too: Residents add to the tax coffers. People move to places that address their needs.

Getting ready for tomorrow becomes especially critical in light of recent AARP research showing that 89 percent of the 50-plus population want to remain in their homes as long as possible, and, if not, at least in their community. "We're dealing with the issue head on, and not waiting until there's a crisis," says Christine Knapp, director of outreach at Citizens for Pennsylvania's Future (PennFuture), an environmental advocacy organization that has partnered with 130 other groups to work on Philly's aging issue. "Rather than just asking what seniors' needs are, we're figuring out what we can all do to incorporate them into our planning so they can be an active part of their communities for the rest of their lives."

Next: Three cities preparing for an aging population >>

Three years ago, the mayor's office, the New York City Council and the New York Academy of Medicine created Age-friendly New York City to address the explosion of the 65-plus population, estimated to increase by nearly 50 percent in the next 25 years. Because of its efforts, last July New York became the first city in the world — Portland, Ore., is the only other U.S. city — to join the World Health Organization's Global Network of Age-friendly Cities. Cities in the network, supported by their mayor and municipal government, agree to work on improving environmental and social factors to promote active and healthy aging, and link to one another to exchange ideas.

By 2030, one out of every five residents in Atlanta will be over age 60. Two years ago, the Atlanta Regional Commission launched its Lifelong Communities Initiative to promote housing and transportation options, encourage healthy lifestyles, and expand access to services for residents of all ages. With input from older residents, a multitude of experts came up with design principles for what makes a community livable. The commission chose six local communities to adopt the ideals.

Dekalb County, which lies east of downtown Atlanta, is one. As a result, County Commissioner Jeff Rader predicts that within the next five years, the area will have more infrastructure, including sidewalks, a local circular transit system and shuttles so seniors don't have to drive. There'll also be a change in the zoning code, with more senior housing in commercial-type districts and congregate meals in neighborhood areas, he says.

Proposed projects, like three senior centers in DeKalb, must be accessible to those who don't drive, have safe sidewalks and have access to other services in the community. "We're interested in not just what happens inside the senior center, but how the building relates to the rest of the community," says Laura Keyes, initiative manager from the Atlanta Regional Commission.

Like Dekalb County, the sprawling suburb of Mableton on the western side of the city is another chosen community. It received a federal Administration on Aging grant to improve the quality of life for older Americans. Results so far include:

Of the 10 largest U.S. cities, Philadelphia has the highest proportion of people age 60-plus, with more than half of them members of a minority group or foreign-born. So in 2008, the nonprofit Philadelphia Corporation for Aging (PCA), the city's Area Agency on Aging, developed Age-friendly Philadelphia. The initiative identifies age-friendly policies the city should adopt, makes sure that the concerns of older people are part of community planning, and brings together a diverse group of experts and individuals to improve the quality of life for people of all ages.

Two years ago, Kate Clark, a PCA planner, created GenPhilly, a network of professionals, mostly in their 20s and 30s. The group raises awareness of the older demographic and offers professionally and networking opportunities for its members.

"GenPhilly is educating the next generation of leaders in our city to think about aging issues and the type of city we all want to get older in," says Allen Glicksman, PCA's director of research. "When I came to the Philadelphia Corporation for Aging, I realized that organizations I had previously worked with were not talking about older adults. I wanted to get young people thinking about it and how to build relationships and partnerships around them," says Clark.

The city's age-friendly efforts include:

Working to revamp the 40-year-old zoning code and coming up with a new comprehensive plan to reflect an age-friendly mind-set that considers residents' health and aging issues. "We're one of the few cities that is proactively thinking about public health as a part of the planning process," says Clint Randall, a Philadelphia city planner. "New research shows a strong connection between the physical environment and obesity and chronic diseases."

A proposed zoning code that would strengthen neighborhood centers, mixing more commercial with residential zones so people feel connected to their neighborhoods. The new code would help residents move around more easily, and go to work or go shopping within short distances of their homes. The zoning code also would require a certain number of housing units to accommodate wheelchairs (no steps, wide doorways), approve accessory dwelling units on single family properties ("granny flats") and add adult day care services.

Five hundred acres of publicly accessible open space being created by the parks department. The city's future goal is to locate a park near a senior center, for instance, or try to have open space within a 10-minute walk of housing.

A checklist to help determine how age-friendly city parks are, and what they need to improve such as shade, programming for all ages and nonslip pavement.

Sally Abrahms is a writer from Boston. She specializes in aging and boomer-related topics.