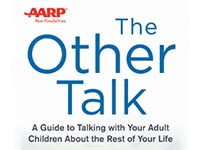 Click on the book cover to enjoy a sample chapter.

To purchase the book, visit AARP.org/OtherTalk

Excerpt from The Other Talk: A Guide to Talking With Your Adult Children About the Rest of Your Life by Tim Prosch, chapter 2. © 2013 by Tim Prosch.

Among today's books, whether on actual or virtual shelves, you'll find many titles that provide tips and techniques on how to care for and cope with an aging and ultimately dying parent. Typically, these self-help books are designed to assist adult children who have been confronted by unexpected crises that disrupt their parents' lives: physical, such as a broken hip or a diagnosis of life-threatening illness; financial, such as a sudden spike in medical expenses or unexpected decline in net worth; or psychological, such as the emergence of mental illness or the onslaught of dementia.

The problem is that these books focus on what adult children should do after a parental crisis hits. While this reactive approach is necessary in coping with the challenges that occur in front of you, it is built on the assumption that the crisis is the children's cross to bear and that the parents have become innocent bystanders. Further, this problem-solution mind-set ignores the long-term emotional consequences that can subvert both sides of the family relationship.

On the one hand, adult children can become overwhelmed by the depth and breadth of responsibilities and the emotional stress of guessing — and being second-guessed about — what their parents would want done in a given situation. On the other hand, their aging parents' last years can be made miserable by the resentments associated with their loss of control over day-to-day living and their feelings of embarrassment and failure at becoming a burden on their kids.

Starting Down the Slippery Slope

When my parents reached their late 60s, they decided to sell their home health care business and finally retire to their house in the woods overlooking Lake Michigan. Then, to escape Michigan's harsh, gray winters, they transformed themselves into snowbirds, buying a second home near Phoenix.

Life was great for the first couple of years of retirement. Many of Mom and Dad's friends from the Midwest had also decided to spend the winters in Phoenix, so there was a ready and comfortable group for them to tap into for trips into the desert and up the mountains, as well as cocktail hour at the end of the day. In addition, the recreation center down the street offered a pottery class and a garden club for Mom, and it had an outdoor swimming pool and woodworking shop for Dad.

My brothers and I and our wives and kids would go visit, typically in February, and everybody in the family felt that our parents' living arrangement seemed very workable. Dad had been diagnosed with multiple sclerosis (MS) 20 years earlier, but he was still getting around on a cane and was able to drive. Mom was as energetic and physically fit as she had always been, and she was able to effectively play the primary-caregiver role. And since they had relocated to one of the retirement villages near Phoenix, there were plenty of medical and other support systems at their fingertips.

Then the crisis hit.

For me, it began on a Wednesday in late March. I was just finishing up a presentation of research findings to a group of senior executives in New York when an assistant came into the boardroom from a side door and handed me a note: "Your father's refusing to get into the ambulance. What do you want to do about it?"

To say I was caught by surprise would be an understatement.

Reprinted by permission of McGraw-Hill. All rights reserved.