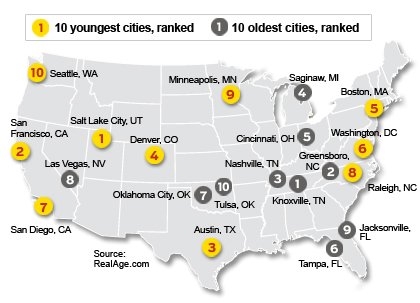 If you want to look and feel younger than your years, maybe you need to move to another city. Like Salt Lake City, San Francisco or Austin, Texas.

RealAge is a website cofounded by Michael Roizen, M.D., chief wellness officer of the Cleveland Clinic, and internist Keith Roach, M.D., with Weill Medical College of Cornell University. The site offers an online health assessment that has been taken by 27 million people since 1999. Respondents are asked about their health habits from sleep to smoking to stress. Sample information from 1,000 men and women in each of the 50 largest metropolitan areas was used to come up with the 10 "youngest" and "oldest" cities, based on the health of their residents. The data were adjusted for age differences, so that a city that attracts retirees wasn't penalized when compared with a college town full of young adults.

And the youngest city in terms of health? Salt Lake City. It topped the list because its residents are gung ho for fitness and loathe smoking.

On the other hand, residents of Knoxville and Nashville may need to start worrying. Those two Tennessee cities are numbers one and three on the list of metro areas most likely to make you old before your time, with Greensboro/Winston-Salem/Highpoint, N.C., coming in second.

"A lot of it is overweight-related," says Roach. "The rates of obesity are very high in those areas, and that means diabetes and hypertension rates and cholesterol are all affected."

Half of the youngest cities are in the West, where some might argue that a milder climate makes outdoor exercise easier. However, Boston, Washington, D.C., Denver and Minneapolis are also on the young list — cities that get more than their fair share of severe weather. So it can't just be a weather thing.

"There is a higher level of exercise in Western cities, which affects their rates of cancer and heart disease," Roach says. But what makes more of a difference is living in cities "with good public transportation and where it's easier to get to places by walking. Those cities tend to do relatively well."

Next: 10 most youthful cities for retiring. >>

Roach and his researchers also broke out the results by specific health habits, such as which cities had the highest blood pressure or fewest number of smokers. Not surprisingly, five of the 10 fastest-aging cities are among the worst for high blood pressure, and four of the top five "oldies" have the highest percentage of smokers. On the other hand, the most surprising finding concerned sleep. New York, the "city that never sleeps," was the second-best in terms of residents getting a healthy amount of z's. "It's not what I was expecting at all, but it's what the data shows," Roach says. 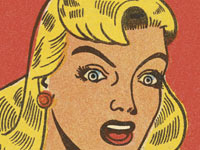 So what can you do if you live in one of the cities that can make you old? Don't despair, says Roach.

"It's important to realize that even if you're in a city with the worst habits, it doesn't mean you have to have them. Your job is to take care of you." Here then are the winners and losers.

Next: What keeps a city's residents youthful?

See the full ranking of 50 cities, from most to least youthful. Read

What keeps a city's residents younger?

In the best cities these are the four key things residents do to stay younger and healthier: Control blood pressure, don't smoke, take a daily walk, and get the right amount of sleep.

Cities with the healthiest blood pressure:

Cities where residents exercise the most:

Cities that get the most sleep:

Cities with the fewest smokers:

Get the latest health news, fitness advice, brain games and more! Sign up now for AARP's Health Newsletter. Do