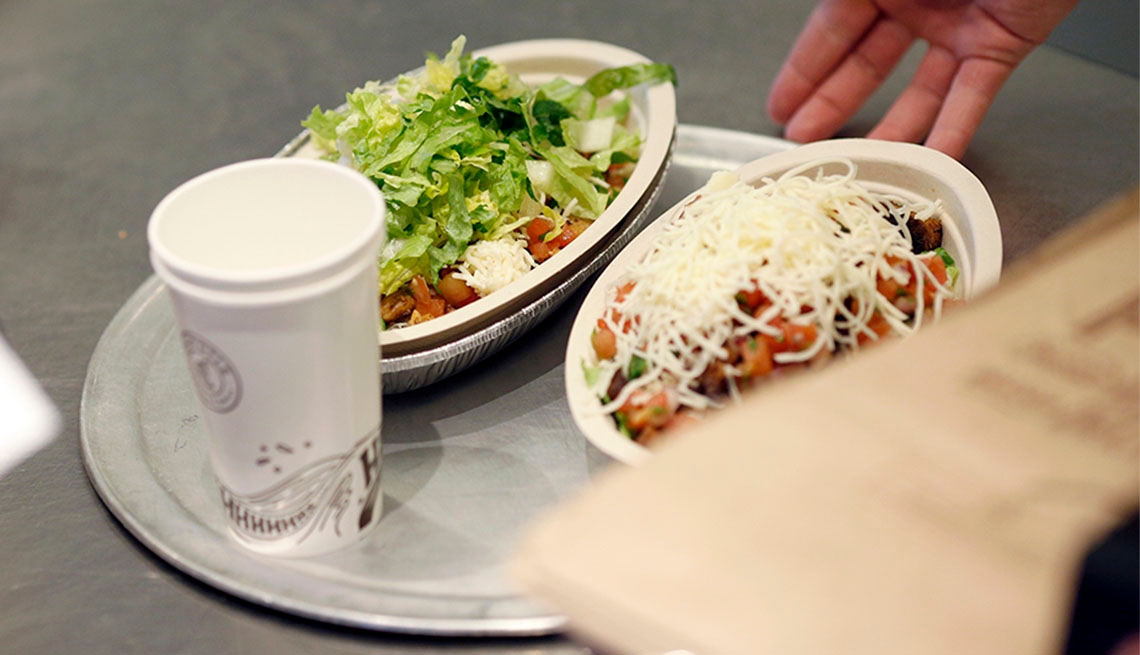 En español | “Can I eat healthy at Subway or Chipotle?” As a dietitian, it’s a question I get asked a lot. I’m happy to report that yes, you can — but it takes some not-so-casual scouring of the so-called “fast casual” chains’ menus. Otherwise, your meal could be awash in sodium with little fiber or vitamins to show for it.

I did the work for you at six national chains using a healthy-meal criteria that includes things like having no more than 650 calories, with at least a half-cup of fruits or vegetables and some whole grains.. (Though I had to lift that criteria for Domino’s, which doesn’t yet offer whole-grain crust.) Otherwise, I measured meals according to whether they had 5 grams of fiber, no more than 6.5 grams of saturated fat — and no more than 6 grams of “added” sugar, which comes from white sugar, honey and other sweeteners.

When it came to sodium (sigh), I tried to keep it at 750 milligrams per meal, though that might be a bit high for those who are over 60 and have high blood pressure. If your order exceeds 750 milligrams sodium, compensate by keeping your sodium intake low for the rest of the day.

You might be surprised that one of the lowest-sodium meals came from Subway, and that my Domino’s concoction leaves room for half a (light) beer or small glass of chianti!

At this popular Mexican grill — or other restaurants like it — you’ll want to build meals around the following guidelines:

A bowl made with:

Taco version:  Same as above, just skip the rice and put all the rest of the ingredients in 3 crispy tacos (they are lower in calories and much lower in sodium than the soft tacos).

Nutrition highlights: Legumes, which douse you with B vitamins, minerals and fiber, and offer plant protein, can help normalize blood sugar, lower blood pressure and LDL (“bad”) cholesterol,” and even control weight. The guacamole also contributes fiber, along with healthy fat, blood-pressure-lowering potassium and the cancer-fighting B vitamin folate.

Take your coffee plain, or as cappuccino or a latte; most other coffee drinks here are too high in sugar and calories.

For now, ignore the buzz about dairy fat being good for you — the scientific jury is still out. If you’re adding milk yourself to a plain coffee you ordered, pour in both skim and 2 percent milk. You can ask the barista to do the same, creating what’s essentially 1 percent milk, for something like a cappuccino. Then make sure the rest of your meal is low in saturated fat by avoiding cheese, bacon or other fatty meats.

In general, salads and protein boxes are the healthiest here with their balance of protein,  vegetables and fruit. Many also contain desirable whole grains. Good choices:  Roasted Carrot and Kale side salad (with enough calories to be a meal), Za’atar Chicken and Lemon Tahini, and the Eggs and Cheese Protein Box.

But skirt around items laden with saturated fat and/or sodium, such as the Farmers’ Market Protein Box, the Grilled Chicken and Cauliflower Tabbouleh, and the Chicken and Quinoa Protein Bowl With Black Beans and Greens.

Nutrition highlights: Beta-glucan, the type of fiber in oats, gives your oatmeal its viscous texture and also helps reduce blood cholesterol and blood sugar. Oats are also rich in compounds that act as antioxidants and fight chronic inflammation, a cause of heart disease, cancer and other diseases. The nuts lend healthy fat and satiety, meaning you’ll feel satisfied longer and, thanks mainly to the latte, this breakfast covers around 30 percent of your daily calcium requirement.

Nutrition highlights: This meal hits the fiber jackpot, covering 94 percent of your daily fiber requirement if you’re a woman 51 or older and 75 percent if you’re a man of that age.  Fiber helps you stay regular, maintain a healthy weight, lose weight, and reduce risk for cancer, heart disease and type 2 diabetes.

If you come in for a breakfast sandwich, go with my pick below — the others are low in fiber and/or high in sodium and saturated fat. My oatmeal pick, also below, is also the winner  — the others have too much sugar.

The healthiest meals for lunch are the full-size salad (they also come in half sizes), even though some exceed my sodium cutoff. Next healthiest order? A half-sandwich (saving you a boatload of sodium) plus a half salad.

Avoid the soups; they’re all swimming in sodium, as are the following sandwiches: Modern Caprese on Black Pepper Foccacia; Cuban on Artisan Ciabatta, and the Heritage Ham & Swiss on Whole Grain.

For sandwiches (or a side slice of bread with your salad), choose Farmstyle Whole Grain (lowest in calories), Whole Grain Pan Loaf or the Sprouted Grain Roll; they are highest in whole grain and fiber.

You don’t need me to tell you the bread bowl is a calorie and sodium disaster! Especially when the bowl is filled with BBQ Chicken Mac & Cheese for a hefty 1,240 calories, 18 grams of saturated fat (a day’s worth) and a whopping 2,480 milligrams of sodium!

Nutrition highlights: This offers all the same nutritional goodies as the Starbucks oatmeal meal, with fiber that helps reduce blood cholesterol and blood sugar, as well as the antioxidant and inflammation-fighting power of oats. And just as with the Starbucks pick, the nuts lend healthy fat and keep you feeling fuller longer.

Nutrition highlights: Its kale and arugula offer cancer-fighting compounds called glucosinolates, and onions and apples boast quercetin, which helps tamp down inflammation, a root cause of cancer and other chronic diseases.

Nutrition highlights: High in fiber, with high quality protein and a treasure trove of vitamins, minerals and other beneficial plant compounds (such as the cancer-fighting phytosterols), the salad’s quinoa has earned its superfood status. The sandwich gives the meal a boost of protein and, thanks to the bread, fiber.

Choose the 6-inch size, and go with either 9-Grain Wheat or 9-Grain Honey Oat breads — they have more fiber and less sodium than Subway’s other breads.

Your best proteins, which are under 300 milligrams of sodium per serving include the following:

Veggie Delite Sandwich With Swiss and Guacamole or Avocado

Details: The sandwich contains cucumbers, green peppers, lettuce, red onions, spinach and tomatoes; get it on 9-Grain bread, and ask for a double serving (1 ounce total) of Swiss cheese plus a double serving of guacamole.  Not all locations carry Swiss; your next best option is provolone. If you’re in one of the few locations that carry avocado, get two portions of it instead of guacamole, to save 200 milligrams of sodium.

Nutrition highlights: Go Subway! This meal beats out other chains for being the lowest in sodium, with plenty of fiber and an impressive 340 milligrams of calcium.  (That’s 28 percent of the day’s requirement for women age 51-plus and men age 71-plus, and it covers 34 percent for men up to age 70.) The veggies pack in about a quarter of your daily vitamin A and C needs.

Veggie Delite Sandwich With Swiss and Chicken Strips: 9-grain bread plus one portion (1/2 ounce) Swiss with 1 serving of chicken strips and a double portion guacamole

Nutrition highlights: Same plusses as the other version — high in fiber, with vitamin A and C, although you lose a little calcium (210mg; 160mg with provolone), but you gain protein.

Get the “Plate,” which is one side and two entrees, or order à la carte.  Skip the bowl (too much rice, not enough other stuff) or the “Bigger Plate” unless you’re really hungry or want to split the meal with someone.

Because a side order of brown rice is more of a hill — with 420 calories — ask for just half a serving along with half a serving of the Super Greens (broccoli, kale and cabbage).

Check to see which entrees are available at your local Panda Express; most don’t carry all the items on the website’s national menu. For example, very few serve any tofu entrees.

Prepare to exceed 1,000 milligrams of sodium, unless you go with my picks. A shame, because many of the entrees are otherwise rich in vegetables and moderate in saturated fat.

Your healthiest orders (both fit Panda Express’ “Plate” model of a side and two entrees):

Nutrition highlights: The Super Greens live up to their name, bursting with cancer-fighters in the broccoli, kale and cabbage (carotenoids and glucosinolates) and garlic (organosulfur compounds).  Brown rice lends B vitamins and fiber, and chicken provides satiating protein.

Nutrition highlights: Nearly identical to the above.

Plan on eating low-sodium the rest of the day, because you’ll rack up half your daily max at Domino’s, even with the lower sodium choices below.

The Classic Garden Salad is a generously sized, ideal accompaniment to pizza. Just lose the croutons and cheese — both come packaged separately — to save calories, saturated fat and sodium.

No dressing is low in sodium, but the Marzetti Cardini Caesar, Marzetti Golden Italian and Ken’s Ranch aren’t bad at 280 to 320 milligrams per packet. Have half a packet, and if you need more dressing, add in a little olive oil.

Nutrition highlights: The more vegetables you pile on, the more nutrients you pick up such as vitamin C (peppers), antioxidant carotenoids (spinach) and phenolic compounds with multiple health benefits (mushrooms). Pizza sauce is rich in the powerful antioxidant lycopene, which survives and even becomes better absorbed when tomatoes are processed. I’d have a lot more to say if Domino’s offered a whole-wheat crust — maybe someday!

Nutrition highlights: Nearly identical to the above.

Janis Jibrin is a registered dietitian, health writer and adjunct professor of nutrition at American University. She lives in Washington, D.C.