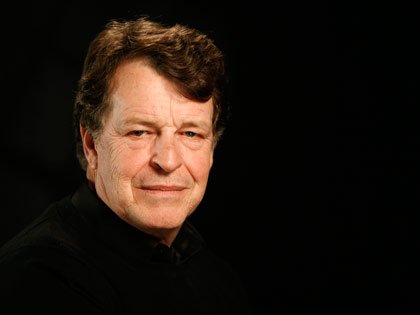 John Noble, 62, is an Australian actor and theater director who's formerly best known for his role as Denethor in the Lord of the Rings: The Two Towers and Lord of the Rings: The Return of the King. But playing eccentric genius Walter Bishop on the Fox TV network's science-fiction drama Fringe has made him much more visible of late, and afforded him perhaps the meatiest role of his career. Walter, a researcher in fringe science who had previously spent 17 years in a mental hospital, is just one half of Noble's challenge. Fringe takes place in two alternate universes, and in the other, Walter — referred to as "Walternate" — is far more put together than his other-dimensional counterpart, serving as our country's secretary of Defense. Noble spoke to AARP about Walter Bishop and how the role relates to aspects of his real life.

Q: What's the most challenging aspect of playing Walter?

A: The research required to play a character that is so eccentric — without making him a fool. I had to do research on mental health and how geniuses behave, on tests that were conducted during the Cold War, what effect certain drugs have on you and the aftermath of those drugs.

Q: What were the key pieces of information that helped you understand who Walter was?

A:There's a certain pattern that exists with geniuses — an eccentricity, a lack of social graces and an inability to really communicate with mere mortals. They think on a different level. It helped me accept a lot of things Walter does, because he doesn't see the world the way I do.

Also, there's been a tendency in the last 20, 25 years to say that people are on the shelf at 45, 50, 55 — a complete reversal from historical fact. As a man of 62, it was important to me to say, here's a man who's still leading the way in terms of his ability to think laterally, in spite of how strange he is.

We shouldn't be put out to pasture just because we've reached somebody's idea of retirement, which was certainly happening in Australia, and I think elsewhere as well. Retirement age went down to about 50 or 55 or something, when men and women were at the peak of their powers. It was quite ridiculous. So that was a fairly important thing for me to play. In my own career, I've probably done my best work in the last 10 or 15 years or so.

Q: Have you had that problem in Hollywood?

A: I haven't, because I came into film and television late in my career. I was a theater man, so I was never in the situation of being a handsome Hollywood leading man, and then having to age. This is a problem for a lot of fellas, and it's worse for girls — although, I have to say, a lot of girls now in their 40s and 50s are doing amazing work. At last year's Emmys, all five nominees were over 45, or something like that. It shows that things are shifting.

Q: Your character, Walter Bishop, experimented on children, giving them special drugs to help them cross over to the alternate universe. What's your take on Walter's morality?

A: I think it's shifted. At a certain stage in his life he was extremely pragmatic, and thought that the greater good overrode everything. As he's gotten older, a lot of his pain has to do with what he's done. Experiments on children are horrific, but he and his partner believed they were doing something to benefit mankind. I do believe that his descent into insanity was a result of coping with some of the stuff he'd done.

Q: Do you ever draw on your relationship with your own kids to fuel the relationship between Walter and his son Peter?

A: Josh Jackson [who plays Peter] and I discuss a lot of our own lives. We both have an investment in this, because father-son relationships are not dealt with in-depth terribly often. We talk on a daily basis about how to make it real. It's probably the main focus of our work — to hold the relationship true.

Q: Can you give me an example of something you and Josh have discussed regarding this relationship?

A: What happens when there's a breach of trust? Trust is very hard to repair, so that had to be a slow repair over the first two seasons. It's not like, "That's all right. You've lied to me for 20 years, but I forgive you." It doesn't happen that way.

Q: You once said in an interview that it's essential that fathers and sons butt heads in order for the son to become a man. What kind of head-butting did you do with your own son?

A: There has to be a handing over. I remember saying to my son, when he was about 18, "If you want to be the alpha male, that's fine. Take over." There's a time to hand over, and a time to hold onto fatherly authority, and that doesn't happen overnight. So it's been, hopefully, a very respectful passing of the baton. Now, instead of having a boy and a man, you have two men.

Q: That has to be a challenging way to look at it as a father.

A: It's human nature. Fathers who resist it don't do their kids any favors. Many very strong fathers have turned out ineffectual sons by not allowing them to grow as men.